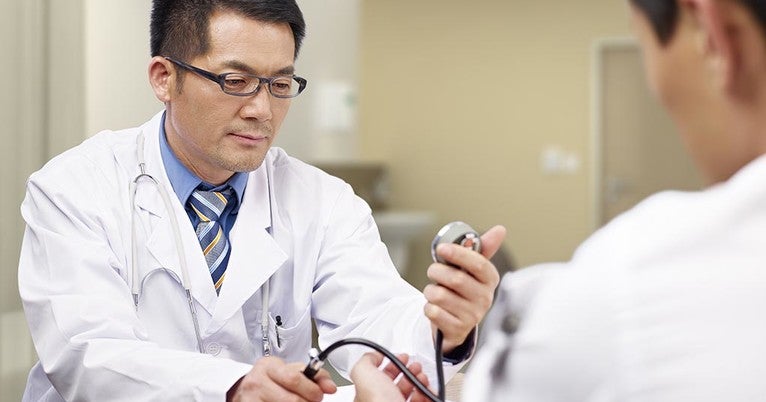 Body mass index is positively associated with blood pressure, according to the ongoing study of 1.7 million Chinese men and women being conducted by researchers at the Yale Center for Outcomes Research and Evaluation (CORE) and in China. These findings appear in the Aug. 17 issue of JAMA Network Open.

In individuals who were not taking an antihypertensive medication, the researchers observed an increase of 0.8 to 1.7 mm Hg (kg/m2) in blood pressure per additional unit of body mass index (BMI). Overall, the population had a mean BMI of 24.7 and a mean systolic blood pressure of 136.5, which qualifies as stage I hypertension according to American Heart Association guidelines.

Researchers recorded the participants’ blood pressure from September 2014 through June 2017 as part of the larger China Patient-Centered Evaluative Assessment of Cardiac Events (PEACE) Million Persons Project, which captures at least 22,000 subgroups of people based on age (35-80), sex, race/ethnicity, geography, occupation, and other pertinent characteristics — such as whether or not they are on antihypertensive medication.

“The enormous size of the dataset — the result of an unprecedented effort in China — allows us to characterize this relationship between BMI and blood pressure across tens of thousands of subgroups, which simply would not be possible in a smaller study,” explained George Linderman, first author and doctoral candidate at Yale.

In China, the frequency of obesity is expected to more than triple in men — from 4.0% in 2010 to 12.3% in 2025 — and more than double in women — from 5.2% to 10.8%. Meanwhile, high blood pressure already affects one-third of Chinese adults, and only about one in 20 of those with hypertension have the condition under control, according to an earlier Yale-CORE China paper for the Lancet based on data gathered in the same Million Persons Project cohort.

“If trends in overweight and obesity continue in China, the implication of our study is that hypertension, already a major risk factor, is likely to become even more important,” said Harlan Krumholz, M.D., the Harold H. Hines, Jr. Professor of Cardiology, director of CORE, and senior author on the study. “This paper is ringing the bell that the time is now to focus on these risk factors.”

This research has been supported by grants from Chinese Academy of Medical Sciences Innovation Fund for Medical Science, the Ministry of Finance of China and National Health and Family Planning Commission of China, the China–World Health Organization Biennial Collaborative Projects 2016-2017, the National Key Technology R&D Program, Research Special Fund for Public Welfare Industry of Health, the 111 Project from the Ministry of Education of China, the Peking Union Medical College Youth Fund and the Fundamental Research Funds for the Central Universities, and National Institutes of Health.