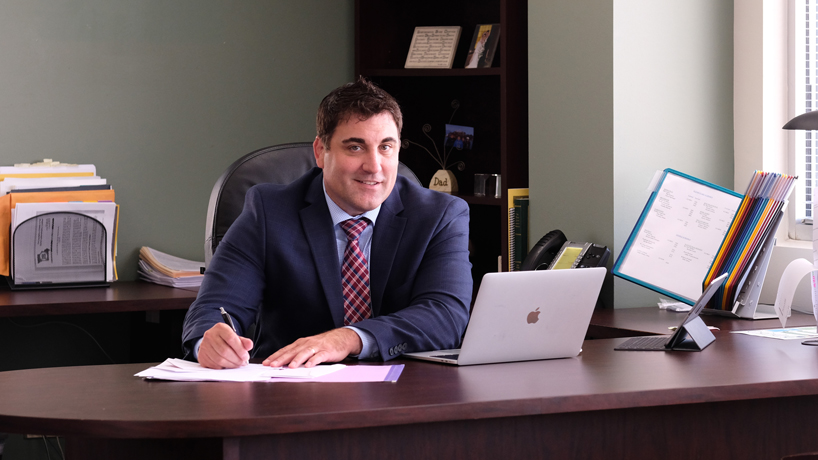 After working in the Pattonville School District since 2001, Tim Pecoraro (BS education 1994) took the reins as superintendent in July. Pecoraro grew up going to Pattonville schools and was assistant superintendent for curriculum and instruction for the past 11 years. (Photo by August Jennewein)

When he first started college, Tim Pecoraro thought he wanted to be a high school social studies teacher and wrestling coach. But after transferring to the University of Missouri–St. Louis, Pecoraro realized a couple of things.

He liked working with younger students more than with high schoolers. And there were other ways to influence students.

“As a classroom teacher, you have a chance to really impact the lives of 20, 25 students,” said Pecoraro, who earned his BS in education from UMSL in 1994. “I thought it would be really neat to be an elementary principal, where you could impact the lives of the whole school.”

He did that, serving as the principal of Briar Crest Elementary School in St. Ann, Missouri, for six years. In 2007, he became the assistant superintendent for curriculum and instruction for the Pattonville School District.

This February, after Pattonville Superintendent Mike Fulton announced he was leaving his post to take over Shawnee Mission schools in Kansas, Pecoraro was promoted to superintendent.

Now, his decisions will impact nearly 6,000 students a year, from kindergarten through 12th grade, in the district where he grew up.

“It’s a little surreal, to be honest,” Pecoraro said. “When I think back, I was an average student. I never would have thought I’d become the superintendent. If you talked to most – probably all – of my teachers from that time, they would’ve said the same thing. It’s a neat feeling to know that I’m able to come back and help the community that helped shape who I am as a person, to help all the students who live in this community now.”

Pecoraro’s roots run deep in north St. Louis County. He lived in the same Bridgeton neighborhood until his late 20s. His father, Joseph, was the fire chief in Normandy. His future wife, Kim Stern Pecoraro, whom he started dating in high school, graduated from UMSL with her bachelor’s in education in 1994 as well. She now teaches at Fort Zumwalt West High School in O’Fallon.

When Tim graduated from Pattonville High School in 1989, he went to William Jewell College in Liberty, Missouri, so he could continue wrestling. Once he decided to move on from wrestling, he came back home and enrolled in the UMSL College of Education.

“I knew UMSL was a good school with a good reputation,” Pecoraro said. “I knew that UMSL was the place that I wanted to go. I knew, when I went to UMSL, I was going to find out if I really wanted to be a teacher or not. They afforded me that opportunity to make that decision pretty quick.”

Pecoraro said UMSL’s connections with local schools were extremely beneficial. He got the opportunity to work with a variety of students and find where he fit best.

Toward the end of his undergraduate experience, Pecoraro worked as a student teacher at John Weldon Elementary School in Dardenne Prairie. The school had a full-time opening for a fifth-grade teacher at the end of the school year, and Pecoraro snagged it fresh out of UMSL.

“That’s another thing that I give UMSL credit for,” Pecoraro said. “They not only encouraged but kind of required you to have some initial conversations with the principal, which was a little intimidating at first. But that’s a way to start building that relationship. When they had an opening, the principal basically came down and told me he wanted me to interview for it. It was kind of right place, right time, but the connections that UMSL had really allowed that to happen for me.”

Pecoraro officially took over as the superintendent in early July, but he’d been laying the groundwork for the transition since Fulton announced his departure five months earlier. And, really, he’d been preparing himself for this job in the 11 years prior, working as Fulton’s right-hand man and helping oversee a golden age for Pattonville schools.

Even though more than half of the district’s students qualify for free or reduced lunch – compared to around 20 percent when Pecoraro was a student – he says the district’s academic performance is better now than when he was in school.

“When you look around, a lot of districts, when poverty increases, student achievement decreases,” Pecoraro said. “We’ve intentionally developed a system where we have high standards for all students, a solid curriculum, great teachers and a plan that we follow.”

Pattonville has made a concerted push to embrace “personalized learning.” Instead of treating every student the same, the district encourages its high schoolers to pursue “extended learning opportunities,” in which students get academic credit for work. Local businesses partner with the school to create core competencies for the students to achieve during their time on the job.

“It’s a win-win because it gets students on a career path, we’re giving them high school credit and we’re trying to break that model of having to be sitting in a classroom for seven hours a day,” Pecoraro said. “For some kids, that works perfectly. For others, they might want to be there for four hours a day, then take a couple online classes and do an extended learning opportunity. I’m really proud of the fact that we’re trying to customize some of the learning for our students.”

He’s not planning to make radical changes. He’s the one that helped Fulton chart the path the district is currently following, after all. But there’s always the need to stay on top of the latest trends in instruction, student welfare and school safety.

Pecoraro relishes the opportunity to fill that role.

“Pattonville is a great school district in a great community, and I look at it as my job to continue all the great things that Pattonville is and to make us even better,” Pecoraro said. “My approach has always been that I’m not more important than anybody else in the system. We’re just going to keep plugging away and doing what we do.”