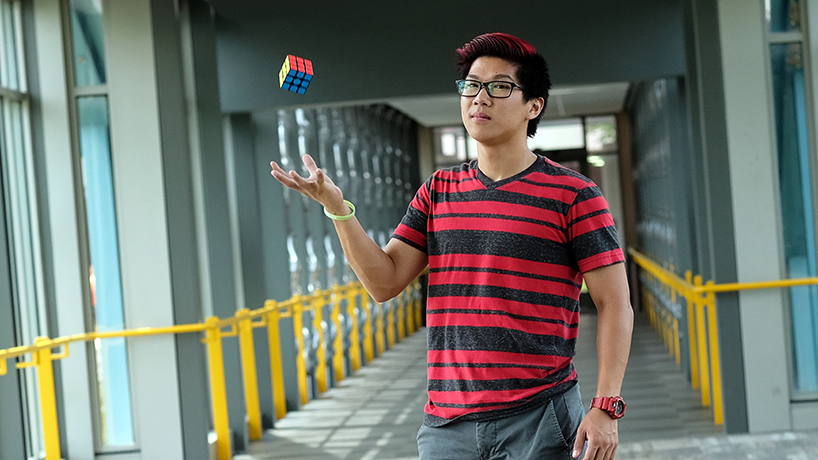 Thomas Poon is on his bell lap. The mechanical engineering student, who is on track to graduate in December, is sprinting down his final straight.

Poon said his running background conditioned him for academic and leadership success at the University of Missouri–St. Louis.

“I think it influenced my entire life, actually,” Poon said. “In track, the best thing you can do is beat yourself.”

Poon joined his high school track and field team at a friend’s urging. When he started, Poon hated the sensation of running but soon learned pace, began to have fun and noticed that the group dynamic made him forget that running hurts.

“I love influencing other people,” Poon said. “I love being able to help them. And cross-country, when you’re running in a group, it’s all about supporting other people.”

Poon has carried those lessons with him to college, and in a way, running also helped guide his academic pursuits. It was his high school track and field and cross-country teammate who introduced Poon to the UMSL/WUSTL Joint Undergraduate Engineering Program. The two friends still room together.

Though Poon considered other universities, he doesn’t believe he would have had the same opportunities for growth or leadership elsewhere.

His time at UMSL largely has been about mentoring and leadership with campus organizations. He has been part of the University Program Board, helps with the Introduction to Engineering course, was an orientation leader and is organizing a Out of the Darkness suicide-awareness walk for September. He even tried to get UMSL’s defunct running club restarted, though it turned out to be a difficult scheduling proposition.

“I always love when students come up to me during the semester,” Poon said. “We’d talk, and I’d get to see how happy or successful they are. That’s what really makes me feel fulfilled.”

It is student leaders who have influenced Poon’s UMSL story at every turn. His own orientation leaders made him fall in love with UMSL during his Triton Overnight Experience.

He credits his Introduction to Engineering student mentor, Cameron Nunn, for pushing him to join his first organization, the Pierre Laclede Honors College Student Association, where he eventually became a peer leader.

Nunn set an example with how devoted she was to her student mentees, and Poon attended her office hours faithfully, hanging out, studying and getting the encouragement he needed to get involved. 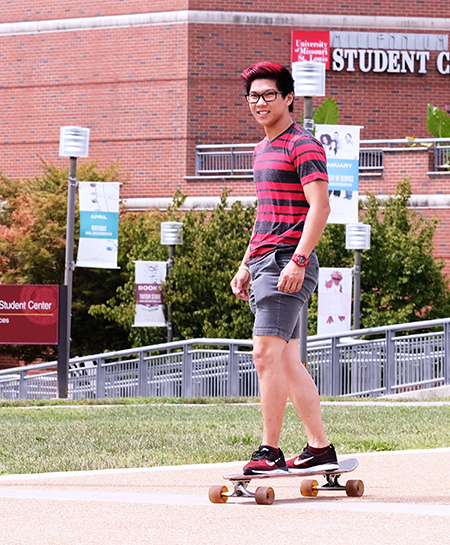 Poon uses his skateboard for transportation between classes. (Photo by August Jennewein)

“I knew when I met Thomas Poon that he had the right energy to be a campus leader,” Nunn said. “I’m sure that he sometimes got frustrated with me when I kept pushing him to take more leadership opportunities, but I did it because I knew he was capable of more. I knew that he had the potential for great success.”

Poon is quick to credit others, but he owes a lot to his own work ethic and independence. Though his older brother graduated from the University of Missouri–Columbia, Poon is a first-generation student and had to learn to navigate the college experience himself.

“I always did what I did and got my work done when it needed to be done,” he said about high school. Despite less supervision in college, Poon feels he was able to transition well because his family situation demanded he be self-motivated.

His mother, and later his brother Stephen, provided for Poon and his three other siblings in their single-parent household. At 19, Poon’s mother left her six siblings and immigrated from Macau, a special administrative region of China located near Hong Kong. She did not have the opportunity to finish school.

Poon tries to combine Stephen’s selflessness with his older brother Danny’s passion for education and helping others. Right before high school, Danny, five years older, told him to work hard both to better himself and for the family’s sake. Poon had always been able to do well enough academically, but that moment helped crystalize the importance of education.

“I took after a lot of their qualities,” Poon said. “My mom, she’s working multiple jobs at a time, going to work early and then coming back late and then always cooking dinner. She’s a real inspiration.”

Poon is sticking to his hard-work resolution. One of his favorite things about the joint engineering program is how it is set up. Classes start at 4 p.m., which allows students to take internships and jobs with normal work hours.

During his last pre-graduation summer, in addition to 12 credit hours, Poon has been working 30 to 35 hours a week as an electro-mechanical intern at Emerson Electric’s White-Rodgers division. This is “a bit intense but works out just fine,” Poon said.

Though he is finishing a computer science minor and could see himself working on both sides, Poon is most interested in robotics’ hands-on aspects, such as fabrication. At Emerson, Poon works with machines, like the lathe and mill, to build parts for product samples.

His most significant experience has been designing preliminary durability and accuracy testing for a new product. Emerson will be selling that product, possibly as soon as next year.

“That was a pretty good pride boost,” he said, “that I actually impacted the company in some way.”