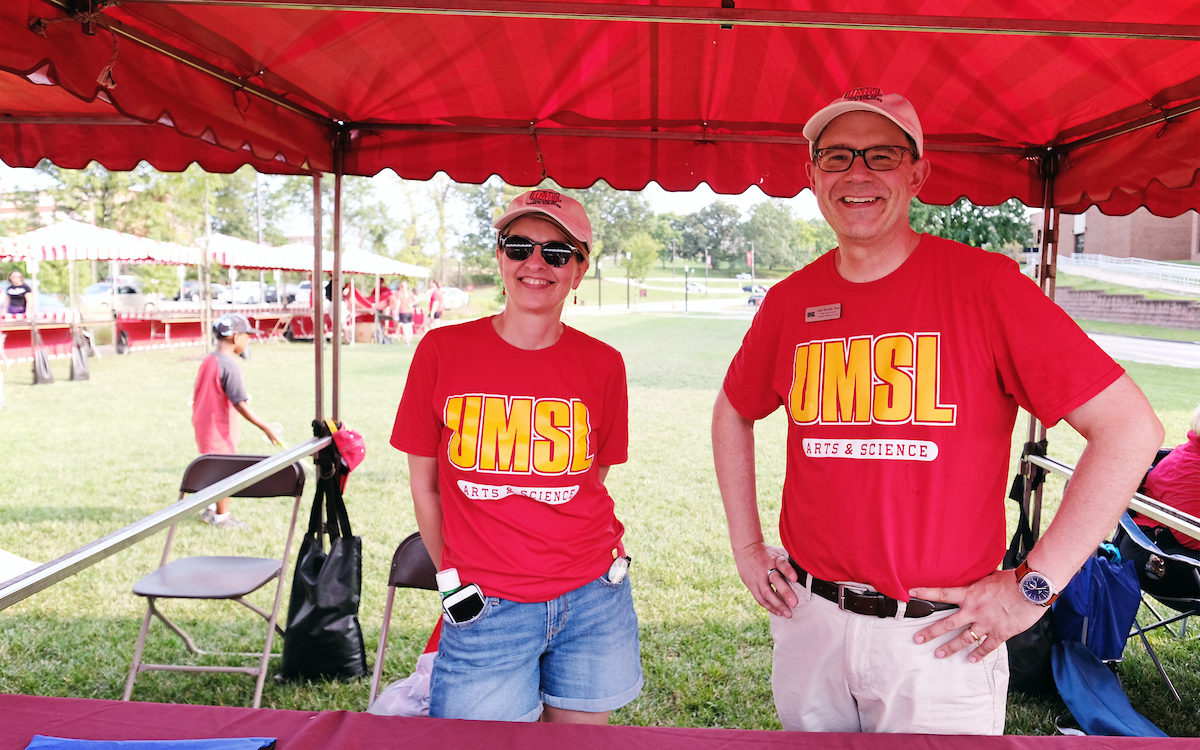 New College of Arts and Sciences Dean Andrew Kersten (at right) and his wife, Vickie, stand ready to greet students at the Welcome Picnic Saturday evening outside the Recreation and Wellness Center. (Photo by August Jennewein)

Andrew Kersten has had this strange sense he’s come back home ever since assuming his new position as dean of the College of Arts and Sciences at the University of Missouri–St. Louis.

Kersten had not worked at UMSL before moving into his office last month, but in the time since he’s encountered more than a few familiar-looking sights – and even smells – as he’s explored campus.

He said it holds a striking resemblance to the one at the University of Wisconsin–Green Bay, which like UMSL’s was constructed in the 1960s on the site of a former golf course.

Kersten, who was born in Missoula, Montana, spent much of his childhood and adolescence around Wisconsin–Green Bay, where his father, Frederick Kersten, taught philosophy and humanities courses.

He also returned there in his own professional career after graduate school at the University of Cincinnati. He served as a professor of history at Wisconsin-Green Bay – where he authored several books – and was eventually promoted, first to chair of the Department of Democracy and Justice Studies and later to associate provost for academic affairs and director of graduate studies.

Kersten left to lead the College of Letters, Arts and Social Sciences at the University of Idaho and had been there four years when he applied to become the dean of UMSL’s largest college – which offers 31 baccalaureate, 16 master’s and seven doctoral degrees to 4,000 undergraduate and 800 graduate students.

Even before setting foot on the familiar-looking campus, he was drawn to its familiar-sounding mission to transform lives by providing access to affordable, high-quality education while promoting economic growth and sustainability as an urban-serving institution.

UMSL Daily spoke to Kersten to find out how he’s getting settled back in the Midwest and at UMSL and what his vision is for the future of the College of Arts and Sciences.

How have you found St. Louis so far?

We’ve just started to explore the city. We’ve had some great experiences. We’re sort of zoo and museum nerds, so we went to the science museum a couple weeks ago, and we went to the zoo right away. But mostly, we’re sort of getting settled. We’re rebooting a life, getting a house up and running – those things. But we look forward to spending more time exploring the city.

And how are you finding UMSL?

Everyone I’ve met so far has been extraordinarily kind. I enjoy working very much with the leadership on this campus. It’s a fantastic leadership team. They have been very warm and welcoming – not only to me, but to my family.

I love the way we talk about ourselves – that we are St. Louis. This is who we are and what we do as a public university that has high-quality programs, that’s accessible and affordable to everyone. We moved for that vision, and at a moment at the university when we begin to redefine what it means.

I heard that you asked earlier this summer if you could move up your start date because you felt like there was more to do. How have you been spending your time since you moved into your office on July 16?

I’ve tried to learn as much as I can before the school year starts. I read a book this summer a friend gave me. It’s called “The First 90 Days,” and in that book, it really describes the balance between learning a new organization and bringing value to that organization. What I’m trying to do now is learn as much as I can so that I can really begin to bring the value to these questions about the future. So I’ve been meeting with department chairs and center directors, touring spaces and talking about plans for the future. Most every day on my calendar is full.

What I’m finding is that the university is going through multiple processes of reinvention in terms of curriculum, in terms of the kind of services that it provides to students no matter where they’re coming from. The university is expanding its reach, and that’s why meeting with as many people as possible is really good for me so that I get from multiple perspectives what’s happening and where the growth avenues are.

How different was the college you oversaw at Idaho?

It was about half the size. There was an entire College of Science at Idaho, so they had broken out the sciences from the humanities and social sciences and performing arts. We have a unique opportunity here also to think about general education, what it has meant to us on this campus in the past and present and what it might mean in the future, and how we could take advantage of some of the processes that are going on right now to create structures that enhance student recruiting, that enhance student retention and graduation.

I know retention was one of your big successes at Idaho. What were the secrets or things that you learned along the way that can apply here?

I think we have a great advising staff at the college. Our processes – whatever comes next – will be built on solid best practices.

I have a secret shopper in the mix. My own daughter, Emily, is going to be a first-year student in the fall, and I was watching the ways in which the college was reaching out to her, and one of the things I find so exciting is that they were reaching out to her in a way she would recognize. She’s 18 and email is something she uses, but it’s not necessarily something she looks at like we look do. She is more apt to respond – and she’s very similar to others in her generation – to text. So the advising reach out to students in the college is actually initially by text, and I think that’s a very interesting practice that we may want to spread everywhere in the college. Maybe the university wants this as a best practice.

We must be student-centered and student focused in our design of recruiting, advising and graduation. We should use the same design principles that we come to expect for the rest of our world.

I think Amazon is successful because their interface really isn’t that complicated for something that actually is complicated. Business-to-consumer relations using multiple sources and all the things they do in the background that might be complicated to the consumer seem quite simple and easy. For our students, we would want the same sort of design principles at play. A degree path is at the bare minimum 120 credits. That means to get through in four years, every student needs 30 credits a year. It doesn’t have to be 15 a semester, but it does have to be 30 a year. So we begin to break down complicated concepts like 120-credit degree path into chunks that students and advisors and faculty can readily understand and talk about. Within that then, what are the degree paths? What’s the map that gets a student from here to here?

Moreover, since we’re talking to many students who are first generation, the people that they’re talking to need to understand the map too. If your parents didn’t go to college or had some but not a degree, they’re going to have questions as well. So advising is something that’s extraordinarily important.

What was it like to be on the other side and look at the university as a parent?

It’s fascinating. I was in some respects excited. The hard questions weren’t the academic ones; they were the living arrangement ones. What’s the residence hall life like? How does that work? Where’s the food? All those questions that all parents have.

What we have found out through our experience is that although my daughter’s coming with me to make this transition, she chose UMSL. Going through the orientation, every interaction has only made her feel more comfortable and happier about her selection of a university.

When you started your career, did you aspire to end up in administration?

That’s a great question. In some ways, I think there comes a moment when faculty, when they get tenured and promoted, have an opportunity to engage in faculty governance leadership and other leadership opportunities.

As I did that in my career, what I found out is that I enjoyed that work very much, and I see my job every day as getting up, getting to work to support faculty, staff and students. The thing that we find most important, that we value the most, is getting students to their degree, and as fast as they can with the most enriching experience and also then the least amount of debt. I found those issues in the classroom, as a department leader, as a faculty leader and eventually as an administrator to be the ones that motivate me every day.

What made you want to be a historian?

I remember sitting in a history class like it was yesterday, talking about World War II, the war in the Pacific, and it was the description of one of the final major naval battles where the Americans were able to cross the T on the Japanese navy. I just remember that opened my eyes to a world of understanding. There are moments in history that at the time are significant, but you don’t realize how significant they are. That moment where the U.S. Navy essentially won the war in the Pacific is this moment where they are able to position themselves to cross the T, and I often think about that.

There are these moments of inflection, and if we bring it back to UMSL, 25 years from now, when we’re all retired, watching Cardinals baseball, I would hope the folks who are in these positions look back at this moment and say this was a moment of inflection. It was a really important moment in the history of UMSL, and the people who worked here were able to come together and persevere and work together to fashion that future.