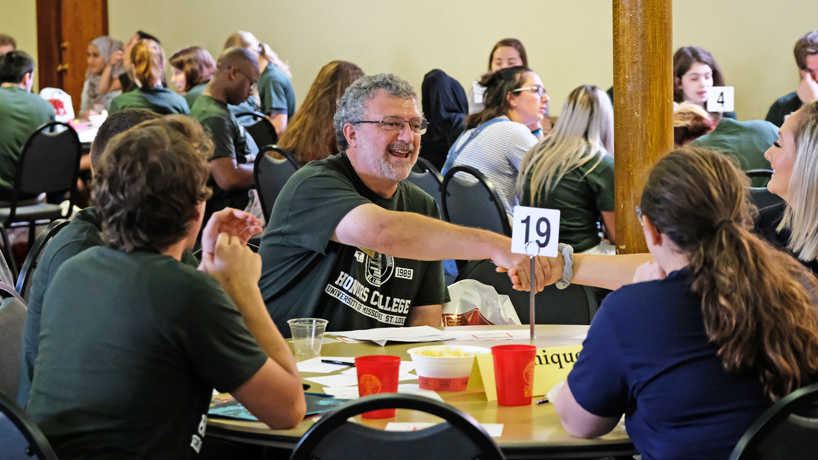 For much of Edward Munn Sanchez’s life, the right opportunities have had a way of finding him rather than Sanchez seeking them out.

As the son of a military man, he adapted to his father’s frequent transfers across Europe during his youth. In his career, he’s been patient and heeded the advice of others while navigating promotions.

This approach to life particularly guided his previous 22 years at the University of South Carolina – an institution where he had only intended to teach for a year but ended up staying on for more than two decades and eventually serving as an assistant dean of the South Carolina Honors College.

There are few times in his career when he’s broken away from this pattern, but Sanchez made an exception for an opportunity to serve as dean of the Pierre Laclede Honors College at the University of Missouri–St. Louis.

Following his start date on Aug. 1, Sanchez spoke with UMSL Daily about the transition, his passion for honors education and desire to increase the visibility of the honors college.

What drew you to this position at UMSL?

Fundamentally what drew me was UMSL itself and the sense of potential here. I think this is an institution that is on the verge of taking the next step, and I hope I can be part of the leadership team that helps that happen.

As far as the honors college goes, a lot of the foundation is really strong. It felt like an opportunity to move it forward to another level without having a sense that I’m fixing anything. That was really attractive because it felt like an opportunity to make a real difference in an already solid program. UMSL also serves a population that I’m really interested in working with. We are working with first-generation students. We’re working with students that are may be underserved in other ways. The opportunity to provide the kinds of things that an honors education can provide to students from those backgrounds was really exciting.

What are some of your immediate goals during your first year in the position?

I would like to see the Pierre Laclede Honors College be a lot more visible in the St. Louis area. I really want to increase the visibility of the college and in that way, hopefully grow it a little bit. That’s actually one of the biggest things is to make the honors college much more visible in St. Louis and make it a real draw to UMSL. I really would like people to apply to UMSL because they are interested in the honors college.

I like the internal structure of the college. If I were to say what I think needs to be changed, it would be that we’re a hidden gem. I would like us to be much less hidden.

That’s a hard question, because what I think makes honors most effective is when you can take a student’s experience and individualize it for them. In the best situation, one honors student experience is noticeably different than another because it’s targeted for what they are trying to do and what fits them best. That’s why honors advising is so important. That’s why 1-on-1 conversations are so important.

As a dean, you’ll be tasked with a variety of responsibilities. What are some of your favorite aspects of an administrative role?

One nice thing about honors is that it is still very much face to face with students. I think almost anyone you talk to who does honors education would say the same thing. The most satisfying part is being with students, the conversations, the face to face. You get invested in the students, and watching them succeed is very satisfying.

The other part that’s fun for me is figuring out how to set up a structure where that’s possible for a lot of students. It’s great to be able to do it 1-on-1 and probably the most fun to be able to do it 1-on-1, but I also feel like you can have the most effect if you can figure out how to make that possible for a significant number of students, not just for the ones that are immediately connected to you.

Your academic background is in philosophy. How did you become interested in honors education?

By accident. I was in the philosophy department [at South Carolina] working on a nanotechnology grant, and I convinced the department chair at the time – who was a good friend of mine – to apply for the dean job at the honors college. My background is from small, liberal arts colleges. I thought he would enjoy it. He got the job, and a year later, he called and said, ‘All right, you talked me into this. Now I want you to come over here and work.’

Once I was there, I realized that this is really the right fit for me. It brings together a lot of what I really liked about my liberal arts college experience. I see myself as an educator, and it gave me an ability to work with a population and set of students that I really liked and thought I could bring something to. Since then, it just became clear this was the right fit for me.

What has been the focus of your scholarly work?

I began working on political philosophy a long time ago, and I worked a lot on issues about philosophy, democracy and technology – how experts work in a democracy and the promise of expertise. I was always really interested in equity issues. What’s happened over time as I’ve become an administrator is that my focus has shifted to arts equity issues and education. I actually now work on honors colleges – what they do, what equity issues they produce and issues of fairness.

My research has ended up being very much about the decisions that I’m trying to make and work out every day, which is really helpful and kind of fun. A lot of academics have their administrative lives and writing efforts in very different places. Mine overlap.

What are some things that you want students to know about you?

I think it’s personal things. I am very available, and my door is open. I am not a shy human being, and I am not retiring soon, so you should come see me.

I’m from Madrid, so at some point, you will have to hear about soccer and Real Madrid because it’s an obsession. If you have opinions about Cristiano Ronaldo leaving Madrid, I would be happy to talk to you about that.

I’m pretty interested in lots of things. I find things that people are interested in interesting. If you are really engaged in something and you start telling me about it, I’m likely to get caught up in it. All of the sudden, if someone else thinks something is really interesting, it’s easy for me to get engaged. It’s part of my personality. I like hearing about things. There are lots of ways to learn.

What brought you from Spain to the U.S.?

That’s a long and complicated story. My mom is Spanish, and my father was in the Air Force at the time. We started moving when I was 6 or 7. We spent more time in Europe than the United States.

We were living in Germany when my dad got transferred to North Dakota. Once I was in high school there, I ended up at college. My intention was to go to school in Spain, but it just wasn’t a viable option at the time. I’m a U.S. citizen, so I could go here. Once you go to college here, you go to graduate school here. Once you go to graduate school here, you get your job here. I always thought I would return to Spain. I was probably 30 years old before I finally said, ‘You know, I’m pretty much living here. This is where I am. I like it here. I’m used to it here.’