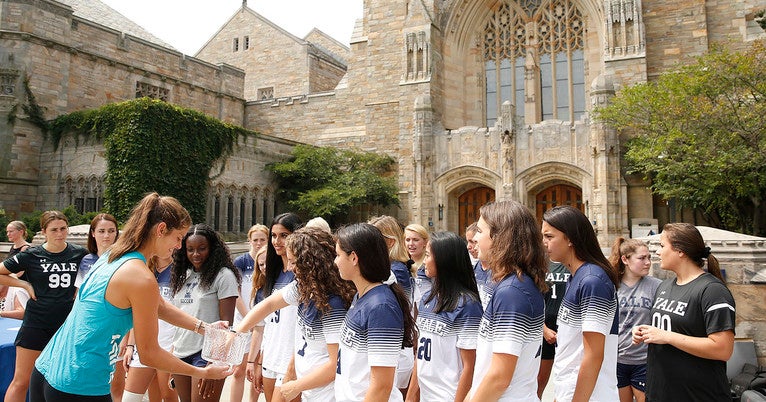 Yale affiliates and the wider community came together for an evening of tennis, education, and entertainment during the third annual Opening Night Presented by Yale at the Connecticut Open. A Yale “street fair” took place on the tournament grounds, introducing tennis patrons to the university’s offerings and opportunities in the arts, science and research, athletics, and employment.

Many guests visited the opening night photo booth with Yale’s bulldog mascot, Handsome Dan, and their pictures are now posted on the Yale Flickr site. Meanwhile, raffle participants took home prizes, including tournament finals tickets, a family membership to the Peabody Museum, and a gift card to the Yale Bookstore. In addition two Yale employees enjoyed special close-up tennis experiences: Pauline Fagan, director of finance at the School of Public Health, won an instant upgrade to front-row seats, and Daniel Federman, a professor at the School of Medicine, won the chance to go on court to conduct a pre-match coin toss.

The opening ceremony featured a flag procession of tournament players alongside Yale international students and scholars, and culminated with a performance of the national anthem by members of The Yale Citations. The evening wrapped up with a pair of friendly exhibition matches starring tennis legends, other celebrities, and two newcomers to Yale’s tennis teams.