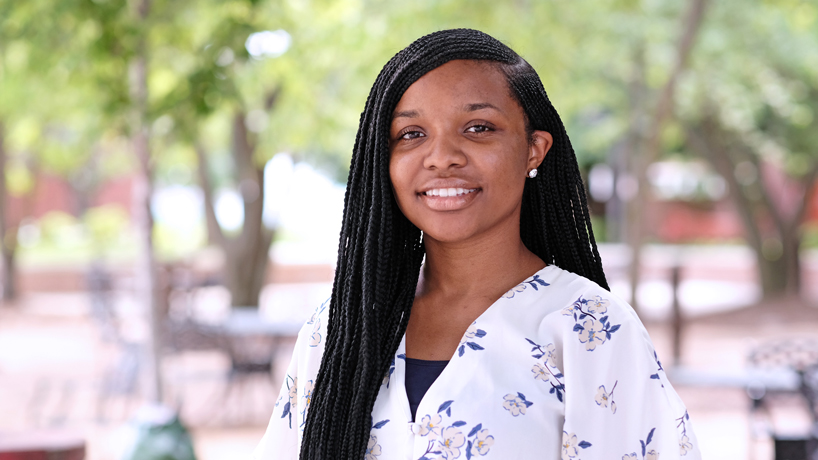 Donella Johnson returned to St. Louis in August after spending the summer living and working in New York City. For the past few months, the accounting major participated in Ernest & Young’s Launch Internship Program, where she rotated between a number of departments. (Photo by August Jennewein)

Donella Johnson’s résumé really only tells part of her story.

It includes the accounting internships she’s had at Boeing and Ernst & Young during her time as a University of Missouri–St. Louis student. But it doesn’t reflect the many years she’s been financially focused.

Growing up, Johnson was the financier of her family. Her mother faced health challenges during Johnson’s youth, so as early as seventh grade, Johnson took charge of the family’s budget, savings and bill payments.

That crash course in personal finance paired with her math aptitude sparked Johnson’s interest in accounting well before she even knew how to translate her skills into a career.

“My passion for accounting started way back when I was in middle school and didn’t really know what it was called,” Johnson said. “All the way up to high school, I had never taken an accounting class, but I decided it would be the best major for me simply because of my past experiences.”

Soon after she arrived at UMSL in 2015, Johnson realized accounting work is more puzzling than she originally anticipated.

“I quickly learned that accounting wasn’t just about numbers – it was about telling a story, analyzing it and, most importantly, seeing the bigger picture from varied perspectives,” she said. “I’m still defining what accounting looks like as life goes on.”

In addition to her College of Business Administration classes, Johnson shaped her accounting perspective through a consistent line of internships. She’s acquired three different opportunities with Boeing over the past few years and just returned from New York City, where she completed Ernst & Young’s summer rotational Launch Internship Program.

She started procuring professional experiences following her freshman year at UMSL through the Boeing Future Leaders in Thought and Experience program. The summer long business internship is offered to rising sophomores at UMSL, Saint Louis University, Truman State University and Howard University. Participating students work alongside Boeing professionals for a competitive salary, reside on UMSL’s campus for the summer and attend professional development seminars. Many, including Johnson, go on to future internships with the leading aerospace company.

After her first FLITE experience, Johnson returned to Boeing but this time landed in Seattle – a part of the country she’d never traveled to before. She was noticeably nervous about working on the West Coast in domestic payroll but came around to the idea with convincing from her local Boeing mentors.

“That experience kind of helped me to think about the future in a sense of stepping outside of my comfort zone and doing what I never thought would be possible,” she said. “I talked to a lot of my mentors before I went and was like, ‘I don’t want to go. I don’t think it will be a good idea. I’m a St. Louis native.’ It turned out to be the best thing that I ever could have done.”

A second successful summer then transitioned into Johnson’s semester-long internship with the accounts receivable team at Boeing’s St. Louis office. Her time in Seattle also pushed her to explore other opportunities outside of her hometown.

As Johnson was looking for new and challenging experiences, she thought back to an EY information session she attended at the last minute a few years before. She went to the event hosted by UMSL’s Multicultural Student Services mainly for the free food but added her name to the sign-in sheet in the back of the room in case a recruiter wanted to call. 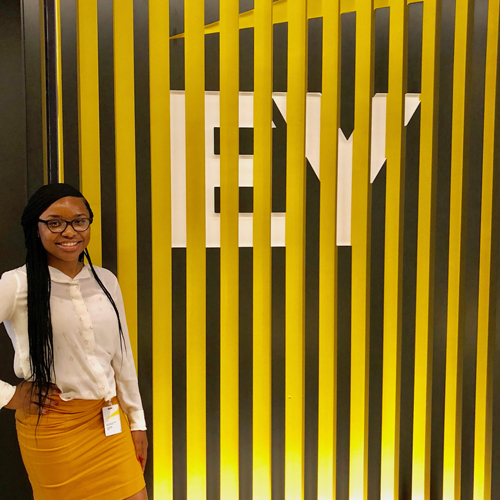 A representative did reach out and expressed a surprising level of interest in Johnson.

“I had never had a recruiter that interested in me,” she said. “We chatted, and I told her that I was interested in going somewhere outside of St. Louis because I thought that would help me grow more, learn and expand my connections. She then asked me a simple question: ‘Where do you want to go?’ I felt like the possibilities were endless.”

With a wide range of opportunities in front of her, Johnson decided on EY’s U.S. headquarters in Manhattan.

During her seven weeks in New York, Johnson rotated between teams, getting to see various aspects of the company. She split her time between the audit and assurance, private client services, foreign and integrity services and client advisory teams. Johnson’s responsibilities ranged from preparing taxes for clients to identifying and analyzing fraud data.

In addition to developing skills with EY professionals, she also learned from peers going through the program.

The group of interns met weekly to chat about life in New York, their perspectives on current events and what it means to live an authentic life. These discussions were among the most memorable experiences for Johnson because they allowed her to share her story and be able to articulate her personal brand.

“What I took from the discussion was that my level of authenticity has allowed me to build my brand and describes me as a determined, quick-thinking, responsible, humble and passionate individual,” she said.

Now that’s she back on campus for the fall semester and working toward her expected graduation date in May, Johnson’s looking for ways to continue to share her story and help piece together the stories of future clients.

“I strive every day to help others achieve their goals while at the same time helping them make the right decisions,” she said. “I’m also very big on the development of people. I think that’s something I want my job in the future to be grounded in and really be centered around because that’s really how I can give back and serve my community.”