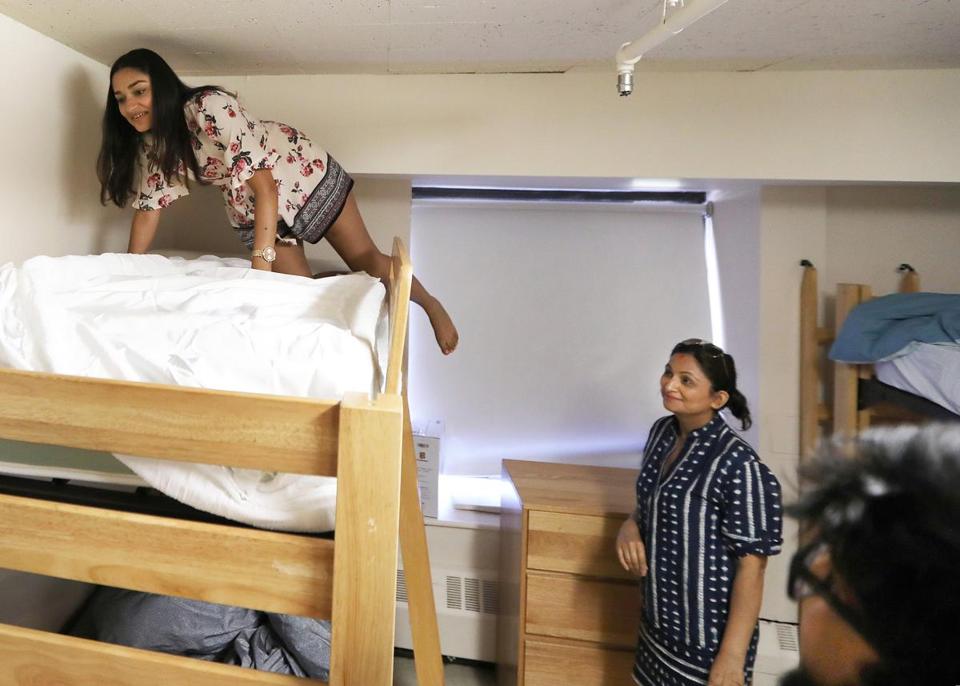 Once the beds were made, the pillows fluffed, the shelves constructed, and the convocation attended, moving day was over for the largest freshman class in Brandeis University’s history.

Their parents would drive or fly out, while the 909 students that made up the class of 2022 would start the fall semester on Wednesday. (The school had 866 last year.) They hailed from 38 states and 33 countries.

As Linzy Rosen, 18, of Westfield, N.J., prepared to get her student ID, she said it didn’t feel real.

Get Fast Forward in your inbox:
Forget yesterday’s news. Get what you need today in this early-morning email.

“I was just at home before,” Rosen said. “It seems crazy to suddenly be here now, finally a student. I’m really excited.”

Both Rosen and her roommate Renee Silver, 17, of West Hartford, Conn., brought small tokens to remind them of loved ones. Silver had a stuffed animal from her sister, while Rosen had a wooden “L” that her twin sister had made her, for her name.

The transitions would be difficult. Rosen’s twin was going to attend a different school, and Silver said, as the youngest, it was a strange adjustment to be leaving her parents.

“I told my sister earlier it felt like I was just moving into camp,” Silver said.

Their family took photos together outside the residence hall. “We hope she has a great time,” said Renee’s father, David Silver. “It’s wonderful. This is my last child I’m dropping off. I’m an empty-nester now.”

“It was very nerve-racking in the beginning,” Ligon said. “But then once I got here the atmosphere was very welcoming, which was nice.”

By noon, most of the nearly 1,000 students were already moved into the dorms.

“We place all of our first-year students based on some questionnaires,” said Timothy Touchette, assistant dean of student affairs at the college. “Based on the demand, we’re able to spread the class out pretty systematically so we didn’t overload any of our first-year areas.”

Jonah Sanders, 18, of Los Angeles, and his roommate Louis Farer, 18, of Livingston, N.J., tried to make the most of the small dorm space, where decor consisted of a Monopoly card (Farer has played the board game for years) and a Star Wars poster.

“It’s just a really welcoming place,” Sanders said. “My high school was pretty cutthroat and a lot of the colleges I visited were competitive. Here, everyone wants to help each other.”

As sandwiches and cookies were served at a Taste of Brandeis event outdoors on the grass, Rachael Brito, 17, of Stamford, Conn., was enjoying the time with her family.

Both of her parents are doctors, she said, but she is undecided about what her major will be. “Since we were born, they’ve been trying to push us into med school,” Brito said, smiling at her older sister, Andrea, who studied international relations at Boston University.

Her mother, Raquel Brito, 51, said she just wants her daughter to find a field that makes her happy.

The moment was bittersweet, Raquel Brito said, as it reminded her of the time years ago when she dropped off Andrea at BU. On the way home, her husband, who was driving, had to pull over; he couldn’t stop crying.

“I think we’re going to have a hard time without her,” Brito said.

Cristela Guerra can be reached at cristela.guerra@globe.com.