Ask an Expert: Andrew Hurley examines the history of climate and its impact on St. Louis - EduBlog.News

Ask an Expert: Andrew Hurley examines the history of climate and its impact on St. Louis 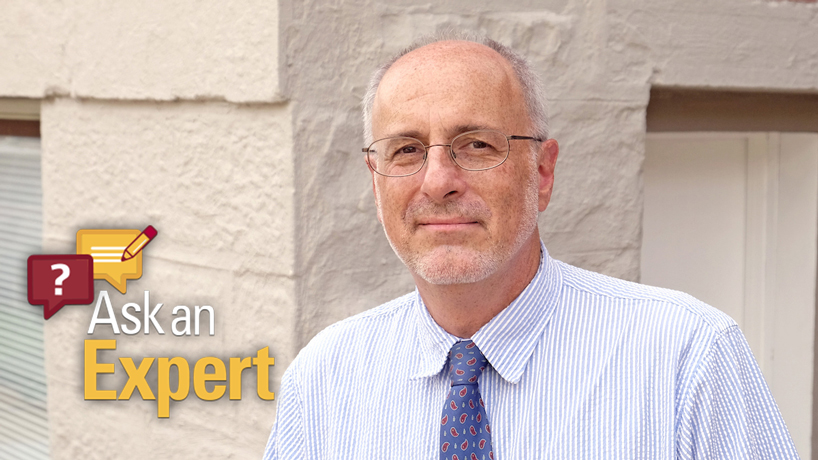 Andrew Hurley, professor of history at UMSL, has examined the impact of climate in St. Louis through a historical lens as part of his work with The Missouri Transect project. The project aims to enhance Missourians’ capacity to model and respond to the effects of climate change on a local scale. (Photo by August Jennewein)

This month brought the 25th anniversary of the day the Mississippi River crested at a record 49.58 feet during the Great Flood of 1993.

It was an unprecedented event considered the most costly and devastating flood in modern American history when factoring the number people displaced and amount of damage to property and crops.

The Great Flood also generated more news coverage in real time – and 25 years later – than any other weather event in this region.

But it was hardly the only the only time weather impacted people in the St. Louis area in a significant way. Tornadoes, heat waves and even wind or electrical storms creating power outages have affected property and even claimed lives.

Climate change has the potential to make those types of events all the more frequent in the years ahead.

It was with that in mind that the National Science Foundation supported “The Missouri Transect: Climate, Plants and Community,” a five-year project started in 2014 and funded through the foundation’s Experimental Program to Stimulate Competitive Research.

Among them has been Andrew Hurley, professor of history at the University of Missouri–St. Louis, who has examined weather from a historical perspective in St. Louis while simultaneously working with neighborhoods to plan for the effects of climate change.

In the latest installment of the “Ask an Expert” series, UMSL Daily spoke to Hurley about what he’s learned about St. Louis’ weather history and ways that knowledge is being applied throughout the area.

What has been your involvement with the project and what is its goal?

The project is intended to conduct research that will help Missourians prepare for the impacts of climate change, and it’s a huge sprawling program, so there are many aspects to it, many avenues of research. One cluster of activities revolves around community-based research. So that is research that involves communities as partners and participants. It’s not simply sharing academic research with communities, it’s actually involving communities in the research process, and I am on that community team. I am the sole historian on the project, so my responsibility is to use historical research as a means of helping Missourians prepare for climate change. The way I do that is to work at the scale of neighborhoods with a variety of organizations – some of them are neighborhood associations, community development corporations, environmental groups, churches – to engage residents in historical research that can be used in local planning processes and, as part of that, to integrate climate change considerations.

What neighborhoods have you worked with?

That definitely seems like something people aren’t usually thinking about.

As you think back through history in this area, what are some of the weather events that stand out?

We don’t normally think about weather as part of St. Louis history, but we’ve had some major weather events – some very severe tornados. Among large cities, probably no city has been more impacted by tornadoes than St. Louis, and they’ve had significant effects on communities and community development, neighborhood development. So we’ve looked at what has helped communities get through some of those episodes in the past – what’s kind of the social fabric of a community that allows it to recover or not recover? What are the community institutions that are important in how a community responds to a natural disaster, which is often a weather disaster? Tornadoes would be kind of an extreme event, but there have been many, many, many storms of lesser magnitude that have nonetheless led to power outages and things like that.

Are those kinds of storms happening more frequently than, say, 30 years ago?

That’s one of the things we do as part of this research is look at weather trends. There is certainly evidence that there has been an increased frequency in powerful storms. Heavy rain events have become more frequent over the last few decades. There is a warming trend that is evident in the city of St. Louis. Part of that is due to global conditions. Part of that is due to the fact that the city manufactures its own heat by the way it absorbs solar radiation, and the materials that go into building the city generate a lot of their own heat.

The city is kind of a heat island, right?

Exactly. Any kind of trends that we see at the global level are magnified by the built environment. Sometimes when people think about climate change/global warming – things that occur on a planetary scale – they may feel like they are powerless to do anything about it themselves or that they may be making just a small drip in the bucket. But when you think about what you can do to change the way heat affects you on a local scale, there are a lot of things you can do.

How difficult has it been to study these issues from a historical perspective?

The challenge has been on multiple levels, not all of which have to do specifically with the content of the research. That presents one set of challenges because, as I mentioned, people often think of climate change as something remote from them, especially at an inland place like St. Louis. Much of the discussion on climate change has to do with rising sea levels. I think in a place like St. Louis, we don’t have the problem of climate change denial. Most people in St. Louis acknowledge that the climate is changing and that there is global warming. That’s not the problem. The problem is, “Why should I care about it here?”

Because people think, “My house is going to still be above water.”

What has your research taught you about the significance of climate and weather?

The other kind of takeaway from the historical research that I find fascinating is just the way that natural environment provided adaptive opportunities to people in ways that are no longer available.

For example, 100 years ago, you had all kinds of streams and ponds scattered around St. Louis where, if it was hot, there was public access so people could go down to a stream or pond and cool off. Those have all disappeared. They’ve been paved, buried underground, become sewers.

When we used to have heat waves in the late 19th, early 20th centuries, people used to sleep in the parks – throngs of people, hundreds of people. Now, of course, with air conditioning, there are many people that don’t need to. They can stay cool in their homes, which is fine if you have air conditioning. But not everybody has air conditioning. And now there’s a fear of danger in the parks. The 1980s was really when that started. It’s a result of air conditioning and the lack of critical mass of people who need to go out to the park. It used to be there was safety in numbers.

With the hollowing out of the center of the city that’s gone on in the last three decades, will we start seeing more green space?

We do see more green space. Of course, it’s uneven. It’s in certain parts of the city. More the north side than the south side. But vacancy does not necessarily equate with the kind of green space that ameliorates impacts of global warming. If it’s a vacant lot where you still have remnants of a house foundation, you don’t necessarily have the kind of water absorption that you could have if it was deliberately designed in a way to facilitate absorption of water.

From the standpoint of heat relief, the problem with the green areas that have replaced housing is that danger factor. People stay away from those spaces because they’re not considered safe. From a climate change adaptation point of view, they’re not as useful as they could be.

Has your involvement in this project made you more interested in climate change?

I’m certainly more interested in it, yeah. It’s a learning experience for me. Reading about weather and weather events is something I never imagined I’d be doing necessarily, but yes, I do find it interesting.

I should mention one other aspect of the research. One of the things we do in some of the neighborhoods is we invite people to talk about places of significance in their neighborhood. They create photo narrations – take a photo of a place and then they talk about it. We make an MP4 file, and then we upload that to a map. That’s available for anybody to look at, and people can share their stories about places. We share research we’ve done with them on their neighborhoods in advance of this exercise to encourage people to integrate weather and climate into the way they see places and understand places in their neighborhood, and then we often use those to spark discussions in planning meetings. We also have developed a weather event archive, which is also mapped, where we have different episodes of tornadoes and heat waves and storms. You can click on different places on a map to see what’s happened.