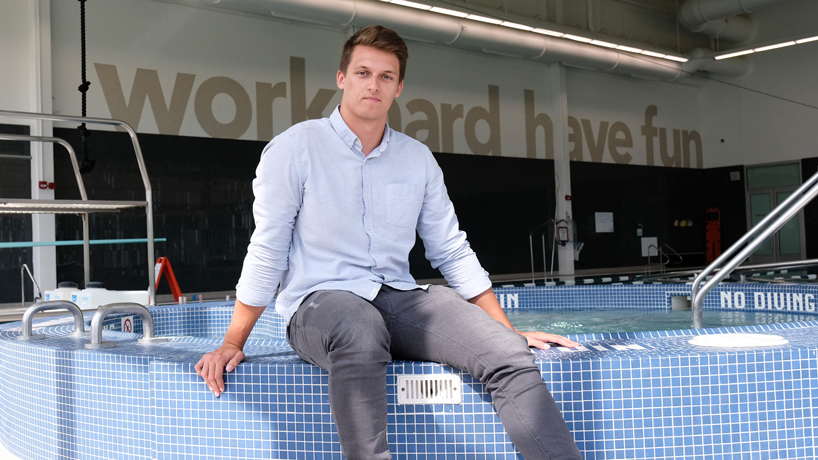 College of Business Administration student Radoslaw Chupka works at the UMSL Recreation and Wellness Center and embodies the “work hard, have fun” motto that runs along the northern wall of the natatorium. (Photo by August Jennewein)

One of Radoslaw Chupka’s luckiest breaks came when he severely sprained his ankle when he was 8.

If not for a playful tussle during a hide-and-seek game gone awry, his educational path would have shaped up differently. He probably would not have started competitive swimming and gone on to a boarding school that specialized in the sport. And he likely wouldn’t have made a transatlantic move in 2015 to compete for the University of Missouri–St. Louis or now held an offer to start his career with World Wide Technology next summer.

His swimming story started when he was trying to find ways to stay active with a bad ankle. During rehab sessions with his dad, Chupka played with the other children in his Polish neighborhood, tried to increase the mobility of his foot and learned different swimming techniques his dad saw on TV.

Although green in the pool, Chupka was a natural. He was comfortable in the water and always had good buoyancy. His family and the other pool patrons took notice of his accelerated talent.

During one particular session, a guest suggested Chupka join a local swim team. The family agreed, but Chupka was initially resentful competing in an activity that was once fun.

“I hated the first few weeks,” he said. “I was crying a lot – every time I was going to practice. I hated it because I wanted to go there and have fun and help my ankle and everything. But I felt better when I realized I was becoming a better swimmer. I stayed with it for the last 14 years, and I have one more year competing. I started to love it. You can’t do it for 15 years if you don’t love it.”

He now brings that passion to his Triton teammates as captain of the UMSL men’s swimming team – a program reinstated in 2014 after a 19-season hiatus.

Despite access to free college tuition in Poland, Chupka thought the UMSL offer was too good to pass up. He would have an opportunity to make an impact on a growing swimming team, study in a ranked international business program while also pursuing a second emphasis in marketing and have access to the bustling St. Louis business scene.

“I can’t swim forever, and I think I was one of the first in my age group to realize that,” Chupka said. “If I were back home, I would not be swimming at all. Swimming in college opened the door for me being here. When it comes to future opportunities, I think coming here was a great choice.”

While at UMSL, he has set a handful of school swimming records, found a campus job at the Recreation and Wellness Center and joined the Regional Business Council Mentor Network, a professional development program that paired him with Vice Chairman of First Bank Joe Ambrose.

UMSL Business Internship Coordinator Lisa Fikki originally introduced Chupka to the program, and since he met Ambrose, the pair connected on multiple levels.

“We have the same work ethic, the same skills, the same mindset even though he is the vice chairman of First Bank and I am a student who works at the rec center,” he said. “It created a really good connection.”

Their bond was particularly beneficial as Chupka looked for internships that would keep him in St. Louis this summer. He’d spent the previous two breaks in Poland with family and friends but was looking to build his U.S. business connections. He hoped he could gain experience at one of St. Louis’ larger corporations because he assumed they would be the most likely to offer him a work visa following graduation.

Through the encouragement of Ambrose, Chupka applied for a position at World Wide Technology, one of the largest privately owned companies in St. Louis.

“I didn’t think about private companies,” he said. “I kind of always had big companies in mind. I didn’t even really know anything about World Wide Technology, but he told me it was a great place to work. After hearing about it, I was naturally excited about the place. It couldn’t be a better fit.”

Over the summer, he worked in supply chain project management, helping to recover freight while also preparing presentations about the company with other interns. The mixture of day-to-day responsibilities and social activities provided a memorable and enlightening experience.

“There are so many things from the internship program perspective that we can balance something fun, like a beach volleyball tournament, with work,” he said. “We’re exposed to all elements of the company culture. We’re not only doing the work, we’re having a good time at the events. It’s a really great combination.”

At the conclusion of the internship, Chupka received an offer to return to the company after graduation. His specific role has not been determined yet, but he anticipates a position in project management or on another team in the supply chain department.

He’s thankful for the opportunity to stay in St. Louis, which may be his next lucky break.

“I have to be a little more realistic about my career than others because I’m an international student with no family here to help me stay,” he said. “I’m really not the one to make plans because, unfortunately, not everything is up to me. I have to be the best possible in everything I do, and I will see what’s out there, what’s possible.”