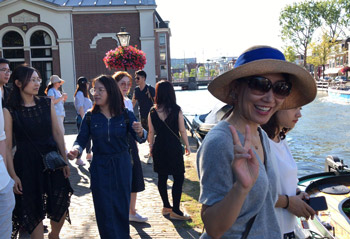 Webster MBA students and alumni from China were hosted at
Webster Leiden as the base of their Dutch and EU business tour.

A group of 22 Webster University MBA students and alumni from the China locations completed a summer study tour through the Netherlands this month, hosted by the Webster Leiden campus.

Participants were students and alumni of the Webster China MBA program with partners Shanghai University of Finance and Economics (SUFE), and the University of Electronic Science and Technology China (UESTC). It was the 11th such study tour for these partners.

The group was organized in China by Webster manager Ady Cao from Shanghai and Rick Foristel, Webster China director. Fan Yang, Webster Leiden faculty member in the George Herbert Walker School of Business & Technology, was instrumental in organizing several of their site visits and accompanied them throughout the week.

A sampling of highlights from their week appear below. 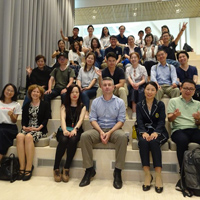 On Monday, Webster Leiden’s Bernadette van Houten, who has consulted U.S. and Dutch companies on cross-cultural preparedness for 25 years, lectured on “Doing Business in the Netherlands.”

“Dutch people collect facts, cooperate, plan, and have separate business life from family life,” she told the group. “They expect business people to be punctual, and very straightforward, but the Dutch go to great lengths to get a consensus on issues and plans, assuring maximum cooperation to assure the group goals.”

The next day, PricewaterhouseCoopers presenters echoed some of these themes, while also discussing demographic trends and approaches to recruiting an international workforce. The group also heard from PwC consultants who focus on China and other parts of Asia.

Also in the first two days:

On Wednesday the group traveled to Utrecht, to visit the headquarters of Rabobank, which focuses on agriculture and food production. They seek business from the very start of the chain, including seeds and fertilizers to the retail sale of packaged and fresh foods. It’s an international bank with a large research team. Fan Yang arranged the Rabobank visit through a recent Webster MBA graduate, Marjolein Valentien, who is a trade and commodities specialist covering the Americas, Europe and Israel. 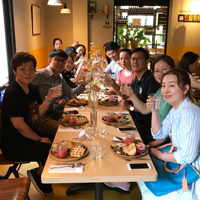 InStock is a start-up that reduces food waste
from grocery chains while serving gourmet
meals.

Upon returning to Leiden, they had lunch at InStock, which is both a gourmet restaurant and a start-up. Three years ago the company founders were researching the problem of wasted food by large grocery chains.

After vetting the possibilities and finding investment, they now have three restaurants and also sell rescued food to other restaurants, which can buy from Instock for much lower prices than on the open market.

The founders had tapped into a whole movement and turned it into an impressive example of entrepreneurship. InStock events coordinator Eric Hoogeboom told the students the entire story while they enjoyed a gourmet meal.

On Thursday the team visited The Hague and a newly opened, Chinese-owned convention center. The Asia Business Center has regular offices at The Hague World Trade Center. Wu Jia, Asia Business Center (ABC) director, welcomed the group and outlined how ABC assists Chinese businesses who want to investigate or start operations in The Netherlands. They also heard from Kurt Wu of JSI Holdings, who discussed how he develops business in The Netherlands and can assist companies with operating there.

Professor Yang Fan, who works regularly with the ABC and Wu Jia, finished the meeting with discussion of her research on Chinese companies operating in The Netherlands. One of her top findings was that “Chinese companies see Dutch market as a gateway to the EU market, but they are also keen to improve their overall competitiveness,and enter into the Dutch market to acquire strategic assets and new technologies.”

The Webster MBA Study Group selected the Leiden campus for the same reason, knowing that the Netherlands is the gateway into the rest of Europe. Rotterdam is the largest port in Europe and handles goods going into the EU and leaving for exportation.

In her lecture, Fan emphasized the importance of culture, explaining to the group, “Chinese companies in general find local management and cross-cultural communications as more challenging than business development or market exploration in the Netherlands. Chinese companies see the Dutch labor law as the biggest challenge, probably because of its protective nature for employers.” 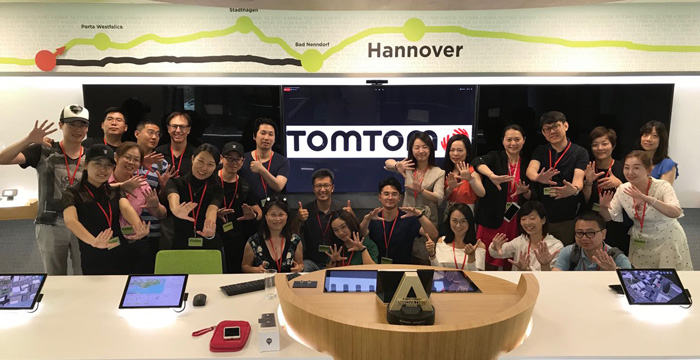 The group toured TomTom headquarters in Amsterdam, learning how the GPS and digital mapmaker’s systems work together.

Friday: Back to Amsterdam

Friday the group was back in Amsterdam, this time with a focus on marketing and promotions. The Netherlands government itself spends a great deal of time and energy to promote its “city brands,” including Amsterdam, Rotterdam, The Hague, and of course Leiden.

Navigating a city crowded with tourists in the busy summer season, the group visited one of the biggest brands of them all. The Heineken beer brand launched from Amsterdam in 1867 and had its primary brewing facilities there until 1988. The original set of buildings are used show the brand as made with the best water and brewing ingredients. Using animation, striking sound and floor shaking movement, Heineken promotions was able to drench the Webster study group – and others – in a natural lake of digital beer. It was Disney quality, mixed with IMAX immersive site and sound.

Group activities concluded with a visit to The Rijksmuseum (national museum), one of many cultural sites the students were able to see throughout the week in between lectures and site visits in this major hub of international business.