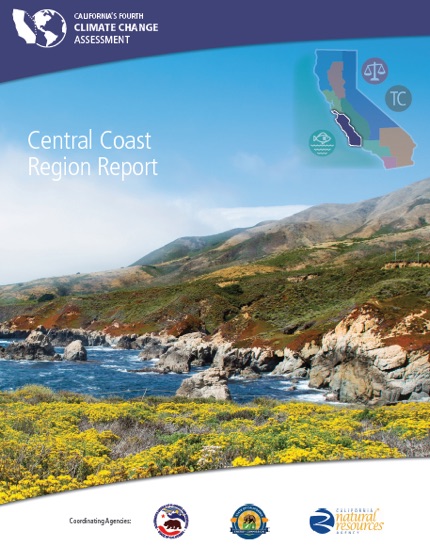 Nearly a dozen UC Santa Cruz researchers contributed to a new state-issued report that assesses the dire impacts of climate change throughout California.

For the first time, the latest periodic report incorporates in-depth regional assessments, including one for challenges faced by the Central Coast. Ruth Langridge, an associate researcher in the Politics Department, was the coordinating lead author of the Central Coast Region Report; she convened a panel of expert contributors to report on impacts to water, ecosystems, energy, transportation, public health, agriculture, and other sectors.

“The Central Coast is over 90 percent natural lands, and we examined in detail the climate change impacts to the many ecosystems in our region,” said Langridge. The report identifies how climate impacts will affect residents and communities, as well as what the region is doing to adapt.

In addition, Gary Griggs, distinguished professor of Earth and planetary sciences, was a lead author and the working-group chair of the California’s Coast and Oceans Summary Report.

The statewide report warns that two-thirds of Southern California’s beaches could completely disappear and the average area burned by wildfires could nearly double by 2100 and provides planning tools to support the state’s response.

“In California, facts and science still matter,” said Governor Edmund G. Brown Jr. “These findings are profoundly serious and will continue to guide us as we confront the apocalyptic threat of irreversible climate change.”

The authors summarized the state of the science on observed and modeled climate change including temperature, precipitation, fog, extreme storm and drought events, and the impacts on sea level rise, runoff, wildfire, and floods.

California has completed three prior Climate Change Assessments. Since the release of California’s Third Climate Change Assessment in 2012, the state has experienced several of the most extreme natural events in its recorded history, including a severe five-year drought, an unprecedented tree mortality crisis, damaging floods driven by atmospheric rivers, and increasingly large and destructive wildfires.

The Fourth Assessment suggests these events will worsen in the future. Among the key findings:

The latest reports also detail the unique and disproportionate climate threats to vulnerable communities and tribal communities, with a focus on working collaboratively with these communities on research and solutions for resilience.

In addition, a report set for release in early September will highlight how California can better integrate climate impacts in design processes for critical infrastructure. The report by a working group established by AB 2800 (Quirk) of 2016 reflects the expertise of multiple scientific and engineering disciplines to help design and construct infrastructure to withstand higher temperatures, more frequent and intense storms, drought, wildfires and sea-level rise.

California is a global leader in using, investing in, and advancing research to set proactive climate change policy. Its climate change assessments provide the scientific foundation for understanding climate-related vulnerability and how Californians may respond. The Climate Change Assessments directly inform state policies, plans, programs, and guidance to promote effective and integrated action to safeguard California from climate change.

California—which is playing a world-leading role in building strong coalitions of partners committed to curbing carbon pollution in both the United States and around the globe—will convene the Global Climate Action Summit in San Francisco next month. At the summit, representatives from subnational governments, businesses and civil society will showcase the surge of climate action around the world, and make the case that even more must be done.