U of I also moves forward with Altgeld Hall renovation

A new data science center will be funded in part with a portion of the $500 million in state capital funding that was approved last spring to launch the Discovery Partners Institute and Illinois Innovation Network.

Plans for a new statewide innovation network to accelerate job creation and economic growth include building a world-class center devoted to the fast-growing field of data science, U of I System officials announced yesterday.

The data science center will be created by replacing the university’s Illini Hall, which currently consists of primarily classrooms, computer labs, and faculty offices, with a state-of-the-art classroom and research facility focused on creating knowledge through statistics, data analysis, and machine learning.

Additionally, the university plans to renovate Altgeld Hall. Built in 1897, Altgeld is the second-oldest building on campus, and is listed on the National Register of Historic Places. It hasn’t been renovated since 1956, when it became home to the Department of Mathematics.

The data science center will be funded in part with a portion of the $500 million in state capital funding that was approved last spring to launch the Discovery Partners Institute (DPI) and Illinois Innovation Network (IIN). The university will contribute to the project.

The Altgeld Hall renovation will receive funding from campus in addition to funding from donations and other sources, some of which has already been secured. 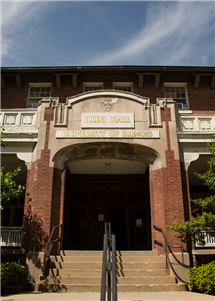 Illini Hall, located a block west of the Main Quad on Wright Street, will be replaced with a new data science center. (Campus photo.)

“The DPI is a $500 million vote of confidence and support from our state leaders in this university’s ability to be the most important driver of innovation and economic growth in our state,” said Chancellor Robert J. Jones. “And we’re extremely excited that one of the inaugural investments recognizes the unmatched expertise in data sciences and advanced analytics we have at the University of Illinois at Urbana-Champaign.”

Feng Sheng Hu, the Harry E. Preble Dean of the College of Liberal Arts & Sciences, said that the building and renovation projects will link the data science initiative through DPI to the departments of Mathematics and Statistics while providing the departments with long-needed infrastructure improvements. The two departments currently share the bulk of the space in Illini Hall.

“This has tremendous implications for the departments of Mathematics and Statistics, and the entire college,” said Hu. “The new data science center will be pivotal to further establishing LAS as a leader in this field, and, taken together, the building projects will allow for the incredible growth we’ve seen in the mathematical sciences to continue unabated.”

The data science center project will create a new, 60,000- to 80,000-square-foot classroom and research facility on the current site of Illini Hall, which sits roughly a block west of the Main Quad on Wright Street. The new facility will be an incubator for collaborative research and education in data science, which is rapidly growing to include faculty and students from all over campus.

Undergraduate enrollment in the departments of Statistics, Mathematics, and Computer Science have doubled in the last decade. The units also have deep connections with businesses that would serve IIN’s mission through internship agreements and alumni who work at Fortune 500 firms across the state and beyond. Faculty from the units are involved in interdisciplinary research that touches all fields at the core of IIN’s mission. 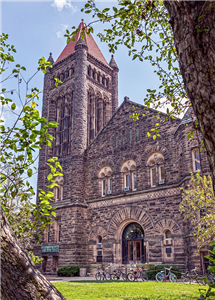 Another campus project under DPI will expand EnterpriseWorks, an incubator for early-stage tech firms at Urbana-Champaign’s Research Park that has been named one of Forbes magazine’s “12 Business Incubators Changing the World.”

Plans for DPI and IIN were announced in October. Work is currently underway on an implementation plan that will establish a timetable for opening and other details of the enterprise, where world-class researchers will work side-by-side with students and businesses to foster next-generation innovation and workforce development and address societal grand challenges of great importance to the state of Illinois and beyond.

The DPI will be developed on a donated site along the Chicago River. The state is currently working on a bond sale that will provide capital funding to help develop the DPI, an innovation center that will be home to leading-edge research, and the IIN, a virtually connected network of regional hubs that bridge the distance between communities and foster collaborative discovery, education, and entrepreneurship, bringing energy and economic development to the entire state.

The DPI will bring together top faculty in agriculture, health care, computing, environment, and other critical fields from the U of I System and partner universities that already include the University of Chicago, Northwestern University, and Tel Aviv University. Nearly 100 new researchers also will be added and together they will connect with hundreds of businesses and thousands of students over time, as well as with entrepreneurs and venture capital firms.

Office for University Relations, and the College of LAS
8/30/2018