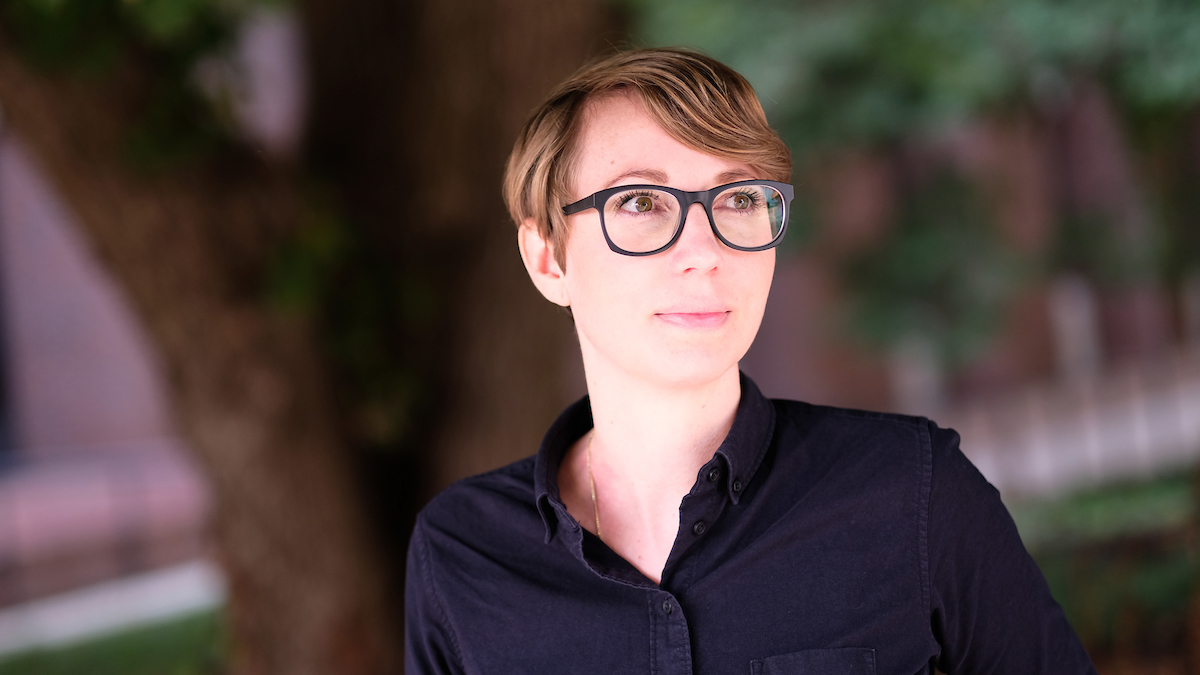 Assistant Professor Heidi Grundetjern is set to receive the King’s Gold Medal for her doctoral research at the University of Oslo on the variation and nuance in women’s experiences in illegal drug markets in Norway. (Photo by August Jennewein)

On Monday, inside the University of Oslo’s famed Aula – the elaborate music hall decorated with the paintings of celebrated Norwegian artist Edvard Munch – she will receive the King’s Gold Medal for her doctoral research on the varied roles women occupy in illicit drug markets.

Grundetjern, an assistant professor of criminology and criminal justice at the University of Missouri–St. Louis, isn’t ordinarily one for grand events, but she didn’t hide her excitement about his one.

She’s thrilled to be among the four honorees this year and only the second sociologist ever to receive the award, which recognizes outstanding young researchers for scientific work assessed at the University of Oslo that makes significant contributions to the research literature in their chosen field.

Beyond that, she’s elated that the recognition will also bring greater awareness to the details of her work.

“I’m super happy,” Grundetjern said last week in her office in Lucas Hall. “It’s a great honor, but more so it’s nice that this specific work is getting attention due to the topic of study. That’s what’s important to me because, compared to the large body of research on men, studies on women in illegal drug markets are scarce.

“In my work, I rely on rigorous data analyses and feminist theories to study women’s experiences in drug markets. I show vast variations and nuance in gender strategies for navigating these markets. This speaks to the importance of not viewing gender in terms of dichotomies, which has tended to dominate in studies of crime. Gender is something much more fluid, and it’s performed in much more complex ways than dualism allows us to recognize.”

Grundetjern took a qualitative approach to examining gender strategies in the drug markets in Norway. She conducted a series of interviews with female drug dealers – many of them incarcerated – who recently had been or were presently part of the trade.

She asked them questions about how they’d gotten involved and gathered their own assessments of the roles they occupied.

Men dominate drug markets in Norway as in the United States. They typically hold the most important roles as dealers, and there are highly masculine rules of the game.

“In such a context, it becomes more difficult to be a woman, and gender becomes an enhanced focus,” Grundetjern said. “What I found was that all the women I interviewed, though they were at different levels in the social hierarchy of their markets, had to relate explicitly to gender in one way or another. They all had showed an awareness around their gender performances.”

She did a systematic analysis that connected the way each individual expressed their gender with their self-reported positions in the market. She found that the subjects broke down into four groups, connected not only by their gender performances but also by shared sociodemographic characteristics.

Women who emphasized their femininity the most were the least successful. They occupied the sexualized roles perhaps most stereotypically assumed of women in drug markets. They were the girlfriends of dealers, dependent on boyfriends or husbands and typically fighting significant addiction that prevented them from leaving despite strong desires to do so.

There was a second group of low-level dealers who tried to strongly identify as one of the guys, using violence and expressing a tough persona. That helped them be marginally more successful.

Grundetjern was surprised to uncover a third group of fairly high-level dealers who deployed what she described as a “feminine business model.” They were women who entered the drug market at older ages, often after having success in other ventures. They were anti-violence and showed care for their customers, accepting losses and taking responsibility when selling to someone who couldn’t pay, and that approach brought them success.

At the top of the hierarchy were a small group of women Grundetjern described as “very flexible in gender presentations.” They were savvy businesspeople with polished skills and varied backgrounds. They played up their femininity to get favorable deals for themselves. But they but also remained independent of men and had reputations of using violence and guns.

Grundetjern noted that their gender helped them stay under the radar of law enforcement because of stereotypes that women don’t typically engage in criminal behavior.

“There was more variation and also more success that I found in Norway than has been shown in the U.S. previously,” she said.

Additionally, she found that all except those who emphasized femininity were empowered in their drug dealing. This empowerment was linked to what they saw as their hard-earned place at the table as female drug dealers. Their experienced success in the market made it difficult for them to desist.

Grundetjern doesn’t have a great story to tell about what sparked her interest in studying drug markets.

She happened into it after getting the chance to work with Sveinung Sandberg, professor in the Department of Criminology and Sociology of Law at the University of Oslo – though she had previously examined drug use while investigating independent rock culture as she pursued her master’s degree.

“I found it both important and interesting to work on this,” Grundetjern said. “I wasn’t specifically going into this field looking for the importance or the role of gender in crime groups. That was something that turned out to be much more important than I had anticipated.”

During the course of her doctoral work, Grundetjern attended a conference where she met Jody Miller, a former UMSL professor now working at Rutgers University in Newark, New Jersey. Miller, noted for her own qualitative research focused on gender, crime and victimization, became one of Grundetjern’s advisers, along with Sandberg, as she completed the dissertation last year that led to her selection for the King’s Gold Medal.

She’s continued to collaborate with Miller since completing her PhD and joining the faculty at UMSL last fall. That connection to Miller was only part of the reason she was so thrilled to get the opportunity in St. Louis.

“I heard so many great things about UMSL,” Grundetjern said. “In my field of qualitative criminology and sociology of deviance back in Scandinavia or in Europe generally, everybody knows about St. Louis. There has been a long history here of doing top-level qualitative research on offenders, and the PhD program here is consistently ranked among the very best programs in the nation. So to be able to be here among such excellent faculty and also students is very inspiring.”

It has taken a little while to adjust to life in the United States and the American university system after growing up in Scandinavia.

“It’s definitely been a transition,” she said. “But my colleagues have been beyond helpful with every question that I have, and I truly enjoy teaching here at UMSL. The students all bring these different perspectives into the classroom, which generates super interesting conversations. It’s all been positive.”

Monday’s award ceremony is providing Grundetjern an ideal opportunity to return to her roots and connect with former colleagues and family members who are making their way to Oslo for the occasion.