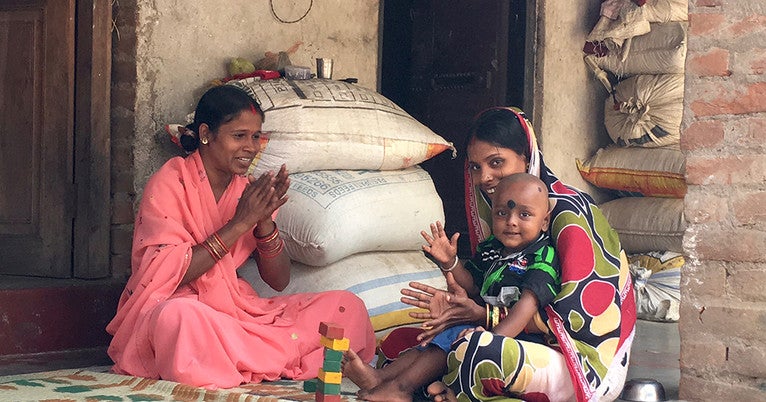 A new Yale-based research initiative is developing the science needed to scale-up promising anti-poverty programs so that they can benefit the greatest number of people.

The Yale Research Initiative on Innovation and Scale, or Y-RISE, brings together leading researchers in economics and political science from Yale and institutions around the globe to tackle questions related to expanding programs that have proven effective in small-scale randomized-controlled trials.

Mushfiq Mobarak, professor of economics at Yale and Y-RISE’s faculty director, explained that the program evaluations that social scientists conduct can demonstrate an intervention’s potential, but they are typically not designed to predict what will happen when an initiative becomes policy and is delivered to hundreds of thousands of people.

“The world becomes vastly more complicated when a program is scaled up,” said Mobarak, who has a joint appointment in the Department of Economics and the Yale School of Management (SOM). “We aim to answer questions about what will happen when a program that succeeded in a handful of villages is expanded to assist hundreds of thousands of people.”

Y-RISE is supported by an anonymous donor and The Whitney and Betty MacMillan Center for International and Area Studies at Yale.

“We are excited to have Y-RISE at the MacMillan Center,” said Ian Shapiro, the Henry R. Luce Director of the MacMillan Center and Sterling Professor of Political Science. “The groundbreaking work Professor Mobarak is spearheading at Y-RISE has the potential to have a tremendous impact on poverty. We look forward to learning more about the initiative’s research over time and how it will help to alleviate one of the world’s most intractable problems.”

The initiative features five research networks, each of which was assembled to address a specific set of challenges and implications in bringing anti-poverty programs to scale. Each network is led by two conveners and has a roster of contributing researchers, including more than a dozen Yale faculty members all told. The contributors represent a variety of fields, including development economics, macroeconomics, operations research, and management, econometrics — the use of statistical methods in the study of economic data and questions — as well as political science.

One of the networks examines how a large-scale intervention will change the behavior of the government, political leaders, and their constituents.

“Scaling up a program often requires us to overcome the resistance of stake-holders who are reaping the rents of the status quo,” said Gerard Padró i Miquel, professor of political science and economics at Yale, who will convene the Y-RISE network on the Political Economy Effects of Policy Interventions. “Those actors may also try to shape implementation with an eye to protecting political and economic rents. It is important to understand what this means for program effectiveness, as these efforts, which only kick in at scale, can lead to substantial subversion of the goals of the policy.”

The effects of policy interventions on electoral outcomes and the incentives of politicians and voters is being studied by other Y-RISE-affiliated faculty, including Yale political scientist Ana De La O Torres and University of California-Berkeley economist Frederico Finan, a co-convener of the political economy network.

Another research network investigates how an intervention could affect people who do not directly receive its benefits. These “spillover” effects can undermine or enhance a program’s value, Mobarak said.

A fourth network will examine an intervention’s potential effectiveness in different region or country.

“Just because a program works in Northern Bangladesh doesn’t necessarily mean that it will work in other parts of Bangladesh or India or Peru,” said Ed Vytlacil, a Yale professor who specializes in econometrics and will convene the Y-RISE network on Evidence Aggregation and External Validity. “We need to develop new methodological techniques to aggregate evidence from different places to predict how a program would change if you were to change its underlying conditions.”

In addition to the geographic dimension, time is an important consideration in bringing a program to scale, said Mark Rosenzweig, the Frank Altschul Professor of International Economics and a convener of the network on spillover effects of policy interventions. His paper with Christopher Udry, a former Yale economist now at Northwestern University, showed that results from a program evaluation conducted in any given year will be sensitive to aggregate shocks, such as weather conditions prevalent in that year. Predicting the effects of that program at scale may require conducting studies over time, or combining the program evaluation data with longitudinal data on aggregate conditions, according to Rosenzweig.

A fifth network, being developed in partnership with Yale SOM’s Program on Social Enterprise (PSE) led by Professor Rob Jensen, will answer questions concerning the practical and operational challenges of implementing policy interventions at scale.

“Giving insight into how to effectively deliver products and services, and how to design organizations to accomplish those goals, is a fundamental objective of management research,” said Edieal Pinker, deputy dean and the BearingPoint Professor of Operations Research at SOM. “The mission of Y-RISE is perfectly aligned with the framework for SOM’s PSE, which seeks to marshal faculty expertise and student engagement toward having an impact on important societal challenges globally.”

Yale’s strength in all the related fields makes it an ideal place for this research initiative, said Alan Gerber, dean of the Social Science Division of the Faculty of Arts and Science at Yale. “We have the range of expertise needed to bring together the methodologies and techniques from multiple fields.”

Mobarak adds, “It’s also important to recognize that there are really smart people at research universities around the world who can contribute to the development of this new science, who we need to bring into the fold.” The initiative is therefore Yale-centered, but outward facing, he notes.

Y-RISE researchers have embarked on two interrelated streams of activity. First, they are developing a research agenda around scaling up policy interventions, identifying gaps in the existing research, and developing the methods needed to answer relevant questions.

The second stream involves setting up partnerships with implementing organizations, such as government institutions or non-governmental organizations, that have the capacity to implement anti-poverty programs and start delivering them at scale.

Evidence Action, an organization that scales up evidence-based anti-poverty interventions, is one such partner. They have started a new collaboration with Y-RISE affiliate and Yale economics professor Costas Meghir to scale up his research agenda on Early Childhood Development. The goal of the research is to understand the benefits of intervening in the education of children early on in their lives as a way to increase their human capital and help them escape poverty, as well as figure out the most cost-effective ways to provide these interventions. The collaboration with Evidence Action will expand the reach of the research project — thus far focused on Colombia and India — by designing and testing scalable early childhood interventions in Africa.

Mobarak, who is from Bangladesh, knows firsthand the difficulty of bringing an anti-poverty measure to scale.

He and Evidence Action collaborated to test and develop No Lean Season, a seasonal migration program that provides $20 subsidies to poor, rural families in northern Bangladesh to promote seasonal migration. Individuals use the money to travel cities for temporary work during the lean season — the period between the planting of rice crops in August and the January harvest — when jobs are scarce in the countryside and food insecurity is widespread.

The program has been scaled to reach 1.4 million people in Bangladesh and is being tested in other countries. Households involved in the program consume an average of 550-700 additional calories per person per day.

“I know from experience the challenges of developing and testing a program and taking it to scale,” he said. “I’m confident that Y-RISE and its partners can develop techniques and scholarship to guide policymakers and facilitate large-scale implementation of programs that improve the lives of people throughout the globe.”