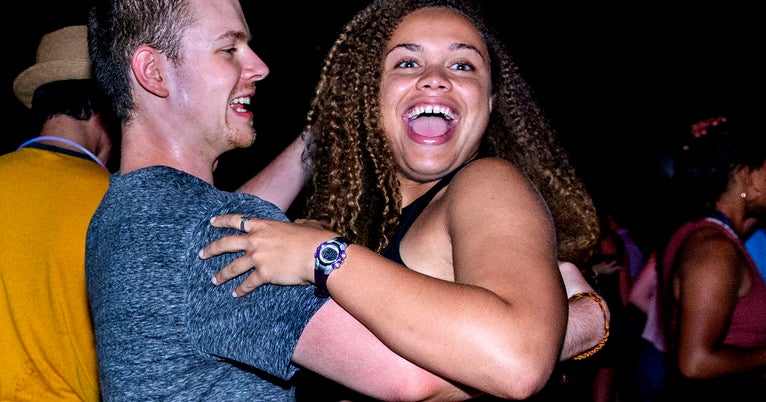 More than 2500 Yalies attended Bulldog Bash, a university-wide party held Aug. 25 on Old Campus designed to welcome students before the official start of classes. The event lasted well into the night–and into the next morning — and included New Haven pizza, picnic tables laden with snacks, and a diverse musical line up.

For many first-years the bash provided a respite following hectic days of settling into college life. During his Saturday morning address at Woolsey Hall, Dean Marvin Chun encouraged the class of 2022 to seek out friends with a range of intellectual and cultural perspectives. But, according to Garth Ross, the executive director of the Schwarzman Center, “that’s not the easiest thing to do when it’s Saturday night and you’ve only just stepped on campus one day earlier.”

“Even the best experiences can be overwhelming,” he adds, “So with the Bulldog Bash, we were trying to make it fun and easy to meet new people. You could go for the music and dancing, or for the food or drink. But in every case, we hope that people went for conversation and connection.”

For that reason, great care went into selecting the musicians that would perform at the event, said Ross.

“The goal was to bring together a group of artists that could create the conditions for the kind of connections we want the students to be able to make with each other … The lineup needed to be connected to Yale and New Haven, intergenerational, intercultural, collaborative, gender-balanced.”

The evening kicked off with the Bales-Gitlin band, a jazz ensemble headed by longtime Yale history professor Jay Gitlin. This was followed by a performance by Chico Álvarez Band featuring Juan de Marcos González, a global music icon and the founding bandleader of the Buena Vista Social Club and Afro-Cuban All-Stars. MC Baba Israel and Grace Galu took the stage around 11:30 p.m. with a freestyling set and Rimarkable, a DJ who combines house, techno, soul, funk, and disco sounds, ended the night to a group chanting “otra, otra” under a bright full moon.

According to Ross, “students flowed in and out from gates open at 9:30 p.m. until 2 a.m. and the crowd on the dance floor grew gradually all night long.”

The evening introduced first-years to the types of events and community that they can expect to find at Yale. At the same time, it allowed upper class students to reconnect with the friends that they hadn’t seen all summer.

Student reaction to the Bulldog Bash was  upbeat.

Arsheya Indwar ’22, a first-year from New Delhi, said that the event “allowed [her] to interact with other first-years as well as [the] FroCos in a more casual environment.” She said she appreciated the energetic tone created by both the live bands and the DJ and “walked away from the event feeling more comfortable at Yale and around the other members of the Class of 2022.”

Johanan Knight ’19 described how the provision of pizza and music, instead of just alcohol, could have a positive impact on first-years’ perceptions of nightlife at Yale. “I think it was a great time, and I hope that Yale continues to have them in the future,” he said.

Chun’s initial email and announcement about “throwing a new party” immediately convinced Marc Shkurovich ’19 that the night “would be a blast,” he said. “I loved having a chance to celebrate the start of my senior year where it all began,” he said.

Jonah Ury ’19 commented on the ambience of the 21-plus beer garden, with its series of string lights and “just the right amount of crowd.” He also praised the decision to limit drinks to two per person, as it engendered more meaningful social interactions and a “very classy vibe.”

Saturday night’s focus on inclusivity and interconnectedness anticipates the function of the Schwarzman Center, scheduled to open in 2020, said Ross. The first Bulldog Bash follows in the tradition of other Schwarzman Center events such as Food Conversations, an evening featuring four world-renowned chefs who discussed today’s culinary issues and trends with students, a celebration of the legacies of David Bowie and Prince, and a two-day jazz festival.

“One of the most incredible opportunities and joys of being part of the Yale community is how lives are changed for the better through meeting and forming relationships with the many inspiring and diverse students, faculty, and staff,” said Ross. “With the Bulldog Bash I feel that we gave people a good way to kick-start that process.”

Chun has already sent out a campus-wide email sharing plans to repeat the event next year.