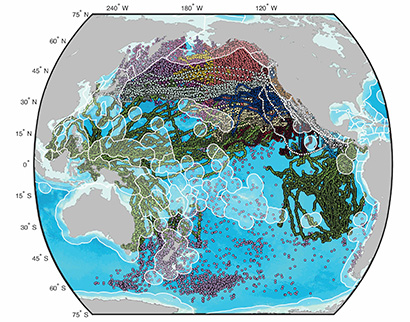 Researchers tracked the daily locations of 14 marine predators within the exclusive economic zones of 37 countries and the high seas of the Pacific Ocean. Some species travelled across the Pacific, and all species entered numerous jurisdictions. (Image credit: Harrison et al., Nature Ecology & Evolution, 2018)

Leatherback sea turtles, a critically endangered species, may visit over 30 countries during their migrations. (Photo by Alex Eilers)

The Laysan albatross breeds within the EEZ of the United States, but forages widely over the North Pacific. (Photo by Dan Costa)

Satellite tags, such as this one on a female elephant seal, have enabled unprecedented tracking of migratory marine species. Elephant seals go on extended foraging migrations in the North Pacific that take them beyond the jurisdiction of any one country. (Photo by Dan Costa)

The leatherback sea turtle is the largest living turtle and a critically endangered species. Saving leatherback turtles from extinction in the Pacific Ocean will require a lot of international cooperation, however, because the massive turtles may visit more than 30 different countries during their migrations.

A new study uses tracking data for 14 species of migratory marine predators, from leatherback turtles to blue whales and white sharks, to show how their movements relate to the geopolitical boundaries of the Pacific Ocean. The results provide critical information for designing international cooperative agreements needed to manage these species.

“If a species spends most of its time in the jurisdiction of one or two countries, conservation and management is a much easier issue than it is for species that migrate through many different countries,” said Daniel Costa, professor of ecology and evolutionary biology at UC Santa Cruz and a coauthor of the study, published September 3 in Nature Ecology & Evolution.

“For these highly migratory species, we wanted to know how many jurisdictional regions they go through and how much time they spend in the open ocean beyond the jurisdiction of any one country,” Costa said.

Under international law, every coastal nation can establish an exclusive economic zone (EEZ) extending up to 200 nautical miles from shore, giving it exclusive rights to exploit resources and regulate fisheries within that zone. The high seas beyond the EEZs are a global commons and are among the least protected areas on Earth. Discussions have been under way at the United Nations since 2016 to negotiate a global treaty for conservation and management of the high seas.

First author Autumn-Lynn Harrison, now at the Smithsonian Conservation Biology Institute in Washington, D.C., began the study as a graduate student in Costa’s lab at UC Santa Cruz. Costa is a cofounder, with coauthor Barbara Block of Stanford University, of the Tagging of Pacific Predators (TOPP) program, which began tracking the movements of top ocean predators throughout the Pacific Ocean in 2000. Harrison wanted to use the TOPP data to address conservation issues, and as she looked at the data she began wondering how many countries the animals migrate through.

“I wanted to see if we could predict when during the year a species would be in the waters of a particular country,” Harrison said. “Some of these animals are mostly hidden beneath the sea, so being able to show with tracking data which countries they are in can help us understand who should be cooperating to manage these species.”

Harrison also began attending meetings on issues related to the high seas, which focused her attention on the time migratory species spend in these relatively unregulated waters. “Figuring out how much time these animals spend in the high seas was directly motivated by questions I was being asked by policy makers who are interested in high seas conservation,” she said.

The TOPP data set, part of the global Census of Marine Life, is one of the most extensive data sets available on the movements of large marine animals. Many of the top predators in the oceans are declining or threatened, partly because their mobility exposes them to a wide array of threats in different parts of the ocean.

Leatherback turtle populations in the Pacific could face a 96 percent decline by 2040, according to the IUCN Red List of Threatened Species, and leatherbacks are a priority species for the National Oceanic and Atmospheric Administration (NOAA). Laysan and black-footed albatrosses, both listed as near threatened on the IUCN Red List, spend most of their time on the high seas, where they are vulnerable to being inadvertently caught on long lines during commercial fishing operations.

White sharks are protected in U.S. and Mexican waters, but the TOPP data show that they spend about 60 percent of their time in the high seas. Pacific bluefin tuna, leatherback turtles, Laysan albatross, and sooty shearwaters all travel across the Pacific Ocean during their migrations.

“Bluefin tuna breed in the western North Pacific, then cross the Pacific Ocean to feed in the California Current off the United States and Mexico,” Costa said. “Sooty shearwaters not only cross the open ocean, they use the entire Pacific Ocean from north to south and go through the jurisdictions of more than 30 different countries.”

International cooperation has led to agreements for managing some of these migratory species, in some cases through regional fisheries management organizations. The Inter-American Tropical Tuna Commission (IATTC), for example, oversees conservation and management of tunas and other marine resources in the eastern Pacific Ocean.

The first session of a U.N. Intergovernmental Conference to negotiate an international agreement on the conservation of marine biological diversity beyond areas of national jurisdiction will be held in September. Harrison said she has already been asked to provide preprints and figures from the paper for this session.

“These migratory species are a shared heritage, and this paper shows their international travels better than ever before,” Harrison said. “The first step to protect them is knowing where they are over their annual cycle and promoting international agreements to manage the threats they may face across several countries.”

Funding for this work was provided by the Sloan Foundation’s Census of Marine Life program. TOPP research was funded by the Alfred P. Sloan Foundation, David and Lucile Packard Foundation, and the Gordon and Betty Moore Foundation, with additional support from the Office of Naval Research, the National Oceanic and Atmospheric Administration, the E&P Sound and Marine Life Joint Industry Program, donors to the Oregon State University Marine Mammal Institute, and the Monterey Bay Aquarium Foundation.