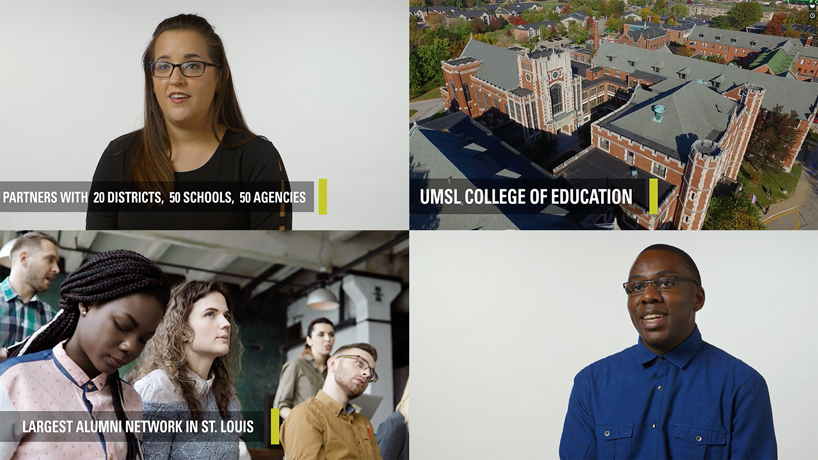 After a successful start in the spring, the University of Missouri–St. Louis Marketing and Communications department is continuing its campaign aimed at highlighting specific schools within the university as a way to share the UMSL experience.

This time around, four alumni each from the College of Arts and Sciences and the College of Education will tell their stories through multiple media – radio, television, digital broadcast and outdoor advertising.

This campaign, which started Monday, Sept. 3 and continues through the end of the month, features 60-second spots promoting the two colleges that will run on eight major radio stations and 30-second commercials that will premiere on five television channels in the St. Louis area. UMSL will even have an ad running during the Ryder Cup golf tournament Saturday, Sept. 29, on KSDK (Channel 5).

The alumni featured in the spots share the benefits their time at UMSL had for them as they began their careers.

“More than anything else, we’re reinforcing the fact that choosing UMSL can lead to a great career,” said Jackie Schlarman, assistant vice chancellor for marketing and communications. “These alumni have good jobs where you can draw a direct line from their education at UMSL to what they’re now able to do. I hope we can convey some points of pride about the individual colleges, definitely, but also that, whatever you want to do, UMSL is a place where you’re going to find connections, internship experiences and a network of people who all believe in your success.”

The campaign will also feature an eight-week rotation of nine billboards placed along five major interstates in the area, also showcasing the alumni from the television and radio spots.

After a similar media push highlighting the College of Business Administration and the College of Nursing in the spring, both schools’ websites saw their traffic increase by more than 120 percent from the same timeframe the year before.

Senior Marketing Writer Jami Hirsch, who created the new video spots, said she enjoys capturing the enthusiasm with which the alumni describe how their time at UMSL affected their lives.

“Really cool things are happening here,” Hirsch said. “Alumni are doing these things that they started when they were at UMSL. These are not actors. We’re not auditioning people. It’s genuine, and that’s important.”