Injuries are a sad consequence of playing a physical game like football. All injuries are disappointing, but some leave more of lasting effect on a team both on and off the field than others. On Monday, head coach Lovie Smith announced that senior wide receiver Mike Dudek will miss the rest of the season after sustaining a knee injury against Kent State on Saturday. The injury is Dudek’s third season ending knee injury during his career with the Fighting Illini.

“For me it’s kind of hard to put into words,” said Smith, “Mike Dudek has worked so hard throughout his career here. Some things are hard to understand…Mike’s meant so much to our program.”

Dudek, who was named a True-Freshman All-American by ESPN.com in 2014, was expected to play a big role in the offense after a season that saw his action limited due to multiple injuries. The loss of Dudek left a strong effect on many members of the team. 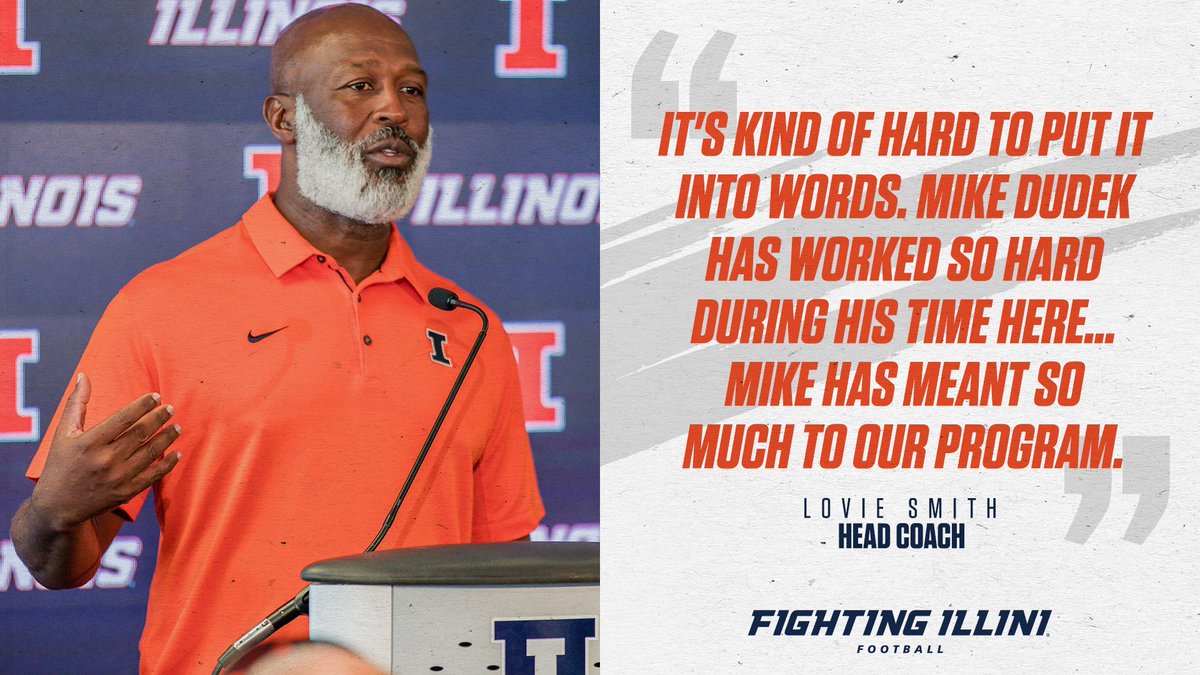 “I hate it,” said offensive coordinator Rod Smith, “You hate it for him…it’s sad because I’ve watched that kid pour his heart and soul into workouts and getting back. My heart goes out to him and his family. I just hate it.”

“I haven’t even registered it yet,” said running back Reggie Corbin, “I am just praying for Mikey. I know that he is going to be with us…Mikey Dudek is an amazing player and definitely an amazing teammate so I can’t wait to just talk to him and see how he feels.”

The loss will certainly leave an impression on quarterback AJ Bush who not only loses a weapon in the passing game, but also a close ally on the field. “I’m just not even thinking about football. I just care about him as a person,” said Bush, “Mike welcomed me with open arms first day I got here. We had big plans and it’s upsetting…I am super proud of him and I’m very upset at the situation, but we don’t know why things happen in life.”

Dudek’s production and leadership will be missed for a young Illini team. With 21 games played over three seasons and over 1,300 yards, Dudek was certainly one of the Illini’s most productive players during his time with the program.

At the time of the announcement, the news of the injury was not told to a majority of the team, however head coach Lovie Smith had an idea of how the team would react.

“I know how they will feel,” said Lovie Smith, “The reason why Mike is popular is he does everything right. There’s no better team player so you can understand how the team will feel.”

In terms of what Dudek will do with the team for the rest of the season, Lovie Smith wanted to give him time to “analyze what happened to him”.

Fortunately for Dudek’s Illini teammates and the Illini fans, Dudek is staying positive. Dudek tweeted out to Illini fans shortly after the announcement.

You can’t allow adversity to define your life. You must take the good with the bad and continue to move forward. I am forever greatful for all the support I have received these past 5 years. #NoBadDays Thank you Illini Nation

“You can’t allow adversity to define your life. You must take the good with the bad and continue to move forward,” Dudek tweeted, “I am forever greatful for all the support I have received these past 5 years. #NoBadDays Thank you Illini Nation.” The Illini will look to replace Dudek with some of their younger wide receivers including junior Trenard Davis, sophomore Dominic Stampley, and freshmen Carlos Sandy according to Rod Smith.