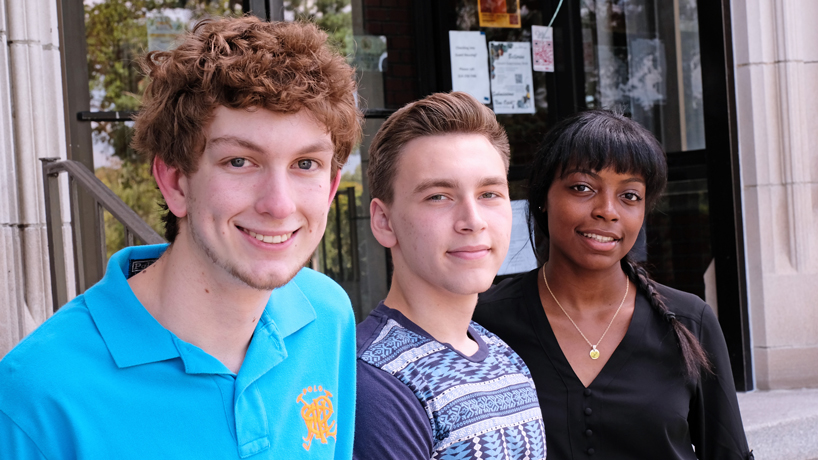 Even before the fall semester began, Sydney Roberson began contemplating where she would like to spend next summer.

Seattle or Southern California are at the top of her location list, and she’s hopeful Boeing will help her get there.

Roberson, an information systems major at the University of Missouri–St. Louis, already has connections at the aircraft manufacturing company just a year out of high school thanks to a program offered through the College of Business Administration.

Boeing Future Leaders in Thought and Experience offers 10-week business internships to rising sophomores at UMSL, Saint Louis University, Truman State University and Howard University. During the program, students serve on a Boeing team, participate in a weekly professional development series known as FLITE School and reside with other interns in Oak Hall on UMSL’s South Campus. Interns also earn a competitive salary and typically receive additional internship opportunities as they work toward their degrees.

Roberson, Armin Topalovic and Brendan Hulahan represented UMSL in the 2018 program. All three were thankful for the opportunity to gain practical work experience early in their college careers.

“My biggest fear is getting into a career field and hating what I do,” Topalovic said. “I thought internships were a way to get a little taste of what a job is like. It’s been cool getting to understand what life will be like and what my next transition could be.”

Topalovic explored the working world as a financial operations intern. He assisted with a number of data collection tasks for teams working on the Boeing 777X, a wide-body commercial airliner.

Although he’s more interested in information systems than finance, Topalovic valued his summer assignments. He had opportunities to network with members of Boeing’s IT department and discuss some of Boeing’s operating systems.

Hulahan, a finance major, worked in business operations, handling quotes and writing proposals. The Opportunity Scholar, who is earning a certificate from the Pierre Laclede Honors College, also dabbled in contracts to round out his skill set. His extra work paid off as he received an offer to work part time for the contracts and pricing team during the academic year.

“I’ve learned a lot this summer, but I guess the biggest thing is that no matter how many times you mess up or fail, it’s just experience, and you can put that toward your next project or assignment,” he said. “Even if you do mess up the first time, you can take what you learned and do it right the second time. When I came in, I guess I didn’t really think of it like that, but this has really taught me to appreciate the process.”

Roberson interned in estimating and pricing for the Boeing Phantom Works division. She was nervous about the work at first but grew increasingly comfortable in the role.

“At the beginning of the summer, I was so shy, and I didn’t want to ask very many questions,” she said. “I thought they would be so mad at me if I did. But people here really want you to succeed. They’ve helped me so much, and I’ve definitely come out of my shell.”

When the workday was over, the UMSL interns and their Boeing FLITE colleagues returned to campus. There they discussed their day, talked through problems and formed new bonds – ones Roberson believes will last well beyond her college years.

“Even though I’ve only known them for a few months, I feel like I have friends for life,” she said. “Everyone comes from a different background, a different school and they all have different experiences. We did a lot of things together and tried to explore the city with what time we had.”

As they built friendships, the interns also developed a strong professional network.

“It’s nice living in one place because you’re so new to the experience of an internship,” Topalovic said. “We just finished our freshman year. We don’t have the experience really that’s required for a position like this. Being around other people who are in the same situation is really nice because you’re already building a network of people you can really communicate with at work to troubleshoot any issues.”

Now that the 10 weeks are over, the UMSL interns are eager to get back to Boeing.

“They pretty much set you up to where you are able to have an internship the next summer if you choose to take it,” Hulahan said. “It’s really exciting, and it’s a really great company. They care about you, and they want to retain you. I would love to go back, even after college.”