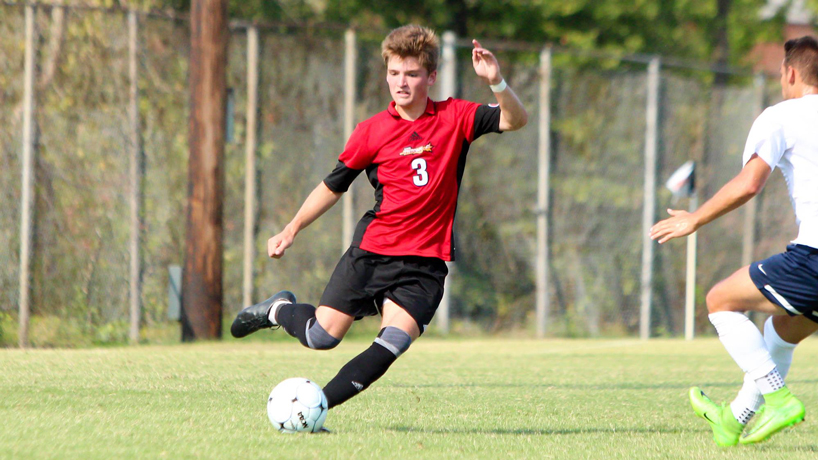 Senior Mark Skrivan assisted on three goals as the UMSL men’s soccer team opened its 2018 season with a 4-0 win over Davenport on Saturday.

Men’s Soccer
UMSL opened its season with a convincing 4-0 win over Davenport on Saturday, with senior Mark Skrivan assisting on three of those goals. The Tritons were then edged by Lindenwood on Sunday night, as the Lions converted a penalty kick with 33 seconds to play in overtime. Senior Oscar Gordillo had a goal in both games. UMSL (1-1) closes out its nonconference schedule by hosting Newman at 1 p.m. this Sunday.

Volleyball
UMSL went 1-3 at the Findlay Tournament on Friday and Saturday, ending the weekend with a 3-1 win over Ohio Valley. Junior outside hitter Selena Nolte was named to the all-tournament team. She averaged 4.07 kills and 1.53 digs per set while hitting .255. Nolte recorded a career-high 28 kills in a five-set loss to No. 24 Findlay on Friday while also registering a double-double with 11 digs. The Tritons (4-4) will host Bellarmine at 7 p.m. this Friday in their home and Great Lakes Valley Conference opener before welcoming Southern Indiana at 3 p.m. Saturday.

Women’s Soccer
The Tritons opened their season on Friday with a 2-1 double overtime win at Ferris State. Senior Lexi Norton scored the game-winner, while junior Rose Crabtree also scored. Sophomore Amber Hayes made a career-high 13 saves in goal. UMSL then suffered a 7-0 loss at No. 6-ranked Grand Valley State on Sunday. UMSL (1-1) will host Saginaw Valley State at 5 p.m. Friday in its home opener.

Women’s Tennis
UMSL opened the fall portion of its schedule at the DePauw Fall Invitational on Saturday and had three players go 2-0 in singles: senior Salome Bleuler at No. 1, junior Marina Prediger at No. 2 and sophomore Leticia Lunge at No. 5. In doubles, Bleuler and freshman Odette Beagrie won both of their matches at No. 1. The Tritons will be at the Illinois Springfield Tournament this Friday and Saturday.