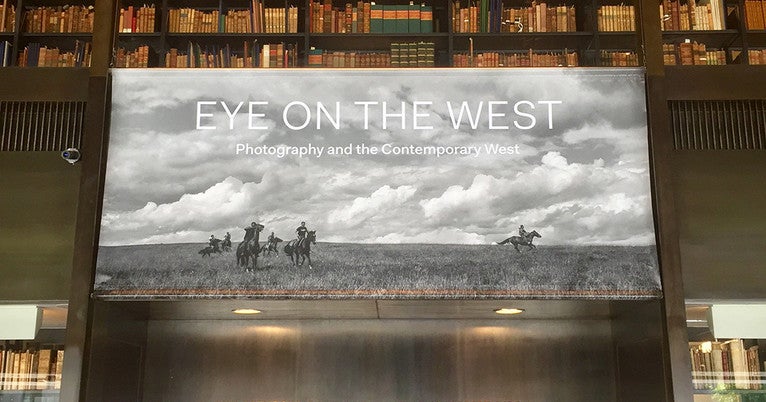 “The North American West has been inhabited for millennia, but our vision of its history and cultures has been shaped, perhaps disproportionally, by the modern invention of photography,” says George Miles, the William Robertson Coe Curator of Western Americana at the Beinecke Rare Book & Manuscript Library, about the library’s latest building-wide exhibition, “Eye on the West: Photography and the Contemporary West.”

The exhibition showcases photographs from the Beinecke Library collections made since 1960, Miles explains, in order to “encourage viewers to consider the continuing relationship between the region and the medium, to think about the ways that photographers influence our understanding of the contemporary West, its people and its places.”

The exhibition is on view from Sept. 1 to Dec. 16 at the Beinecke Library, 121 Wall St. Beinecke Library exhibitions are free and open to the public daily. Information about hours and visiting can be found at the library’s website.

‘Eye on the West’: Lecture and opening reception

The opening of “Eye on the West” will be celebrated with a public lecture, “Challenges and Opportunities in Photography of the Contemporary West,” by Eric Paddock, curator of photographs at the Denver Art Museum, on Friday, Sept. 21, 4:30 p.m., followed by a reception on the Beinecke Library mezzanine. Many of the photographers represented in the show will share insights on their work at panel discussions at the library on Saturday, Sept. 22, from 9:30 a.m. to 3:30 p.m. Other public events during the exhibition include the library’s ongoing series of “Mondays at Beinecke” gallery talks and teas, held every Monday at 4 p.m. during the academic term, which will focus on the exhibition during the fall semester.

“‘Eye on the West’ does not propose a grand narrative about the contemporary West or American photography so much as it strives to encourage contemplation and inquiry,” Miles says. “The earliest photos from the show were made by Harry Adams in 1963, documenting Civil Rights demonstrations in Los Angeles, while the most recent were made by a host of photographers in 2016, exploring the natural history of the American West, the landscape, and the people who inhabit it. Together, these images across five decades provide a window into the many different cultures that make up the fabric of the West today.”

The photographs on the library’s ground floor are arranged by broad themes: The Land, Marks on the Land, Working, Ceremony, Family, Development, Infrastructure, Activism, Conflict, Recreation, Destruction, Remnants, and Regrowth. The curved cases at the head of the stairs on the mezzanine are devoted to portraits: Faces of the West and Children of the West. Photobooks as well as 17 large-format photographs are also displayed on the mezzanine.

The Yale Collection of Western Americana holds tens of thousands of photographs, from the earliest days of the medium down to the present. Photography came to America in the 1840s, the decade in which the annexation of Texas, the Mexican War, the Oregon Treaty, and the California Gold Rush transformed the West. Photographers accompanied the army to Mexico, gold seekers to California, and government surveys to the Rocky Mountains. Exhibited in studios and galleries, sold on cards, and distributed in books, photographs shaped Americans’ perception of the West, says Miles. At the same time the opportunities presented by western expansion contributed to photography’s development as a medium of record and art.

To create images that make us look anew at the West … requires a mix of courage and patience, of imagination and persistence.

“Although the West has changed dramatically since 1840, photographers continue to find it a compelling subject and we continue to rely on photographs to inform us about the land and its inhabitants,” according to Miles. “Photographers working in the West today must navigate between the masterworks of photographers including Carleton Watkins, Timothy O’Sullivan, Ansel Adams, and Edward Weston and the popular, if often inaccurate, iconography of the West created by Hollywood, television, and the advertising industry. To create distinctive work for audiences saturated with images of ‘the West,’ they must grapple simultaneously with popular nostalgia for an imagined past and the extraordinary work compiled by their predecessors. To create images that make us look anew at the West, that show what is distinctive about it today, requires a mix of courage and patience, of imagination and persistence.”

Among the issues confronting contemporary photographers is whether “West” remains a useful frame of reference, Miles observes. In an increasingly global society marked by the dominance of mass-media, chain stores, and social networking, he says, do the communities and landscapes of the North American West present distinctive stories or embody particular issues that enhance our understanding of American history and culture? The 20 photographers whose images appear in “Eye on the West” have responded in various ways to this question and to the challenge of making original work about the West, notes the curator.

Some of them have created visual records of their immediate communities and homelands. Exploring and reanimating the history of the regions in which they live, they portray the enduring vitality of traditional cultures, says Miles, while others have focused their cameras on the inexorable transformation of the rural West, trying at once to convey what was, what is, and what may be coming in small towns, family farms, and Native American communities. Yet others contemplate contemporary ways of living in the urban and suburban West.

As both participants and as observers, many of the photographers have used their cameras to document social movements that have arisen from and transformed Western economic, cultural, and political structures, says Miles, while some find the West ripe with visual metaphors that illuminate the cavalier disregard often exhibited toward nature’s power and our careless treatment of its abundance. In contrast to the monumental landscapes of Watkins, O’Sullivan, and Adams, says Miles, their images suggest the fragility of our presence on the land. Focusing on the intersection of human and natural histories, they explore the many ways contemporary Americans inhabit and transform landscapes shaped over millennia by wind, rain, fire, and tectonic upheaval, he notes.

Several photographers deliberately engage historic photographic projects to draw attention to what is ephemeral and what endures in the West and in its people, Miles says, adding that they provoke consideration of the legacy of earlier projects, the way older images can distort our thinking about the contemporary West, and how the people and places of the West have changed for better and for worse.

Video: ‘Photography and the Contemporary West’

To document what the contemporary West looks like as well as the influence of photography in our appreciation of the region, the Yale Collection of Western Americana has focused on building extensive holdings for a limited number of photographers, says Miles. This approach contrasts with the programs of many museums and galleries that strive to build collections of masterworks to represent the breadth of work being done in the West, Miles points out: “Our goal has been to provide opportunities for students, scholars, and creative artists to explore in depth the work of some of the many talented photographers in the field. The exhibition’s 158 photos were selected from the more than 7,500 images the library holds of the 20 photographers represented in the exhibition.”

To complement those deep archival holdings, the Beinecke Library has set out to build an extensive collection of contemporary photobooks to document the work and perspective of hundreds of photographers for whom it holds no individual photographs, the curator notes. The exhibition’s 36 photobooks illustrate the many ways in which contemporary photographers have observed and commented on the people and places of the Trans-Mississippi West, as well as the ways in which new technologies have revolutionized the creation and distribution of images in book form, says Miles.

“The photographers represented in ‘Eye on the West’ work within a documentary tradition that has been a feature of Western photography since the 19th century,” Miles explains. “They make photographs to share with others what they have seen, or perhaps more directly, what the world looks like to them. Their work is rooted in specificity, anchored in the concrete.”

Miles says of the photographers whose work is now at home in the Beinecke Library: “Their images present us with opportunities to see people, places, or events outside our field of vision, to see something we have overlooked, or, perhaps, to see differently a scene we have viewed without comprehension. As artists, they do not copy the world; they create an intervention that stands between us and the world, an intervention that encourages us to see, feel, and think differently about the world as the result of seeing the image they have created.”