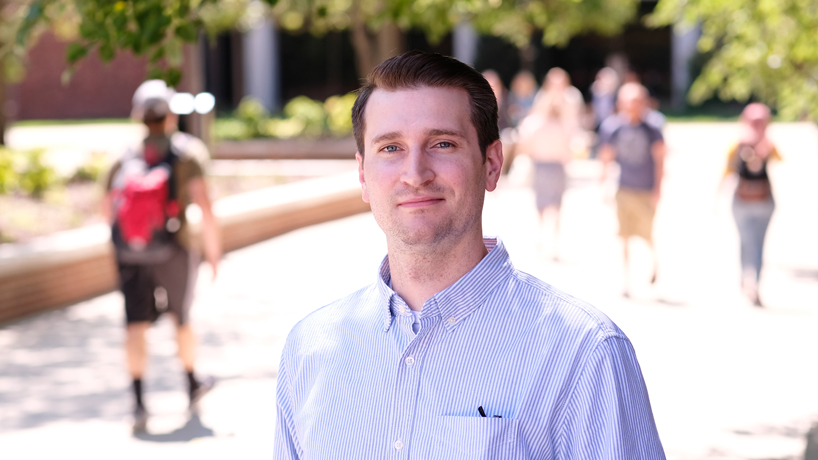 Mechanical engineering student Jonathan Olson interned with Narya Security, one of the companies in the 2018 Ameren Accelerator cohort. His experience included in-depth market research, working on investor presentations and helping establish future goals for the company. (Photo by August Jennewein)

Jonathan Olson’s location was hard to predict this summer.

During the week, he was just as likely to be in a business meeting sitting beside a CEO as he was to be working from home or scouring research databases at a university library.

For a mechanical engineering student, Olson’s surroundings were mostly unfamiliar. He’s more versed in 3D modeling and structural design than developing investor presentations and conducting market research. But he’s spent the past few years in a joint engineering program between the University of Missouri–St. Louis and Washington University in St. Louis gathering a variety of experiences with the hope of becoming a better engineer. He thinks taking a seat at the conference table this summer helped further accomplish his goal.

“A lot of people don’t realize that the engineering world has a lot of overlap with the business world,” Olson said between sips of morning coffee in the Millennium Student Center. “A well-rounded engineer needs to have a good business mind as well. I knew I needed to round out my skill set.”

He expanded on his education through an internship with the 2018 Ameren Accelerator, the second iteration of a program that assesses, mentors and invests in startups from around the globe.

Olson joined a group of UMSL students selected for positions with six participating companies from mid-June to the end of August. During the 12-week program powered by UMSL Accelerate, the University of Missouri System and Capital Innovators, Olson interned for Israeli-based Narya Security.

With limited entrepreneurial and cybersecurity experience, Olson had to learn the business quickly. He did so by shadowing Uri Fleyder-Kotler, the company’s CEO and co-founder. Through his diligence and work ethic, Olson quickly became a trusted source for helping develop a vision for Narya’s future.

“What I’ve been trying to do is add value wherever I can,” he said. “Initially, I was attending meetings with Uri, taking notes, helping him keep track of all of the input and suggestions he’s getting from different sources. I’m also trying to help him develop a vision and strategy for delivering information about the company in the most succinct, efficient manner.”

As he navigated various tasks, Olson acquired a better understanding of the startup community and a greater appreciation for his father’s work as an entrepreneur.

“I don’t necessarily have a business background,” Olson said. “Engineering has been my main focus, but I’ve always been interested in entrepreneurship. My father was an entrepreneur. He started several businesses – everything from real estate to contracting. I definitely had a bit of the entrepreneurial spirit in my family.

“But what I wanted the most for the internship was to get some inside perspective on the business world and what it takes to develop a business. I think the average person doesn’t fully understand how much work it takes to make a startup succeed. I was hoping to get that inside perspective, and through this program, I’ve been able to.”

He’s thankful for the solid business skills built around the internship and for the educational foundation UMSL provided.

Olson enrolled in the joint undergraduate engineering program after four years of active duty in the U.S. Air Force. During his time in the service, he worked as a tactical air controller and later served as a medical technician. Some of his military experiences translated to a career in engineering, but Olson wanted his education to have wide applicability in the job market.

This aspiration led him to UMSL, where he had a smooth transition thanks to the Veterans Center.

“UMSL was particularly helpful for me in building a framework and establishing myself in school largely because of the veteran services that they have,” he said. “The Veterans Center here on campus has been really helpful. It’s easy to take that for granted or not realize how much support veterans are getting. Not every school does that.”

Now in his fourth year of the mechanical engineering program, Olson is ready for his next challenge. He’ll soon begin his first co-op experience with Universal Air Filter, a custom filtration company based in Sauget, Illinois.

“Early on in my college career, I wasn’t quite aware of how necessary or how important it is for an engineer to have multiple internships,” he said. “Engineering is a great field. I think you’re a very competitive candidate with that kind of background. But the technical world, like the business world, is a very competitive environment. They want top-tier talent, and they want people who are dedicated and preferably have experience.”