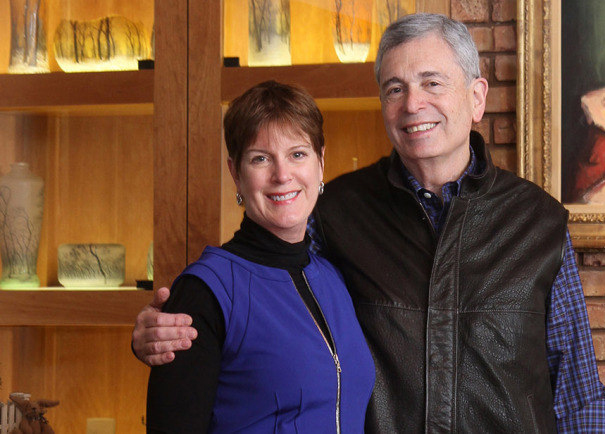 ANN ARBOR—With a $10 million gift from University of Michigan alumni Ron and Eileen Weiser, U-M will establish a new diplomacy center to serve as a hub for engagement with the foreign policy community.

The Weiser Diplomacy Center, housed at the Gerald R. Ford School of Public Policy, will bring a diverse cadre of seasoned diplomats and foreign policy experts to campus.

The gift will support professors of practice in international diplomacy as well as shorter-term opportunities for diplomats in residence from around the world. It will also help students apply knowledge in practical settings through workshops, simulations, conferences and internship opportunities in the U.S. and abroad. The goal is to strengthen U-M’s role as a national leader in international policy education.

“The Weiser Diplomacy Center will enhance the University of Michigan’s and the Gerald R. Ford School of Public Policy’s ability to advance international understanding and develop policies that improve lives around the globe,” said U-M President Mark Schlissel. “I thank former Ambassador and current Regent Ron Weiser and Eileen Weiser for their generosity, vision and commitment to U-M.”

“This new initiative will help train a new generation of informed, principled and entrepreneurial students committed to international affairs,” said John Ciorciari, director of the International Policy Center at the Ford School. “It will also help connect the academy to the world of foreign policy practice to generate new ideas for addressing the many global challenges we face. No comparable concentration of diplomatic expertise exists at any university in the Midwest.”

The Weisers say they want to prepare students in a quickly shifting foreign policy world with new ideas and engagement with renowned scholars and policy experts.

“Under the leadership of Dean Michael Barr, the Ford School is well positioned to become the best public policy school in the country,” said Ron Weiser, former ambassador, founder of McKinley Inc. and a member of the U-M Board of Regents. “I am pleased to provide resources to help in this important field. Diplomacy is not just relationships between countries, it’s about relationships between people … it can change the direction of a country, affecting tens of millions of people.”

Ron and Eileen Weiser’s philanthropy and service extends far beyond Michigan. The Weisers have long been committed to diplomacy, an interest that deepened in 2001-04 when Ron Weiser was appointed by President George W. Bush to serve as the U.S. Ambassador to Slovakia, a country that faced considerable challenges.

After three years furthering the Slovak economic and political relationship with the United States, he received the highest award given to non-Slovaks in the country: the White Double Cross.

About the Weisers
Ron and Eileen Weiser are longstanding U-M alumni, volunteers and donors, committing more than $89 million to the university to date. In addition to Ron Weiser’s service on the U-M Board of Regents, they both serve as vice chairs of the Victors for Michigan campaign and support a wide range of programs across all three campuses of the university, including the Weiser Center for Emerging Democracies, Weiser Center for Europe and Eurasia, Michigan Medicine’s Mary H. Weiser Food Allergy Center and the Chad Carr Pediatric Brain Tumor Cancer Center. The College of Literature, Science, and the Arts; Michigan Medicine; School of Music, Theatre & Dance; UM-Dearborn, and dozens of other units have been beneficiaries of the Weisers’ generosity.

Ron Weiser, a graduate of the U-M Ross School of Business, is the founder of McKinley Inc., a national real estate investment company based in Ann Arbor. Eileen Weiser, an alumnus of the School of Music, Theatre & Dance, is a past executive director of the McKinley Foundation and served eight years on the National Assessment Governing Board. She has served on the University Musical Society Board of Directors and is a member of the UMS Senate. She is in her second, eight-year term on Michigan’s State Board of Education, and currently chairs the White House Commission on Presidential Scholars. She has also served on numerous civic boards.

The Weisers, their children—Marc and his wife, Mary; Elizabeth and her husband, Trey Caswell; their youngest son, Danny—and their five grandchildren, all live in Ann Arbor.