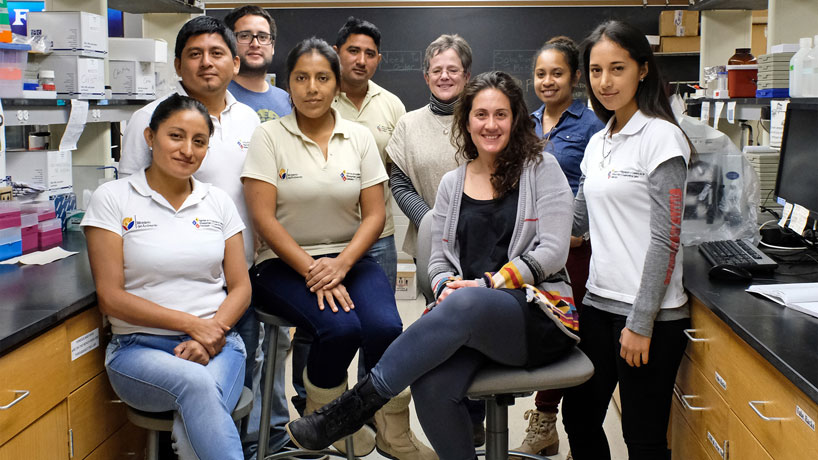 A team of lab technicians and veterinarians from Ecuador’s Agency for Biosecurity Galápagos visited UMSL and Professor Patricia Parker’s lab in March 2017. Last month, they opened an expanded research facility of their own on Santa Cruz Island with support and encouragement from researchers at UMSL and the Saint Louis Zoo. (Photo by August Jennewein)

The Galápagos Islands became famous through Charles Darwin’s explorations of their unique biodiversity, which were foundational in the building of his theory of evolution by natural selection. More than 175 years after Darwin first published “The Voyage of the Beagle,” St. Louis has emerged as an unexpected but vibrant center for conservation in the Ecuadorian archipelago.

August provided a moment worth celebrating when the government of Ecuador’s Agency for Biosecurity Galápagos opened the Galápagos Biosecurity Laboratory on Santa Cruz Island. It marks a significant step forward for Ecuadorians providing their own expertise to this critical conservation work, not only with birds but with all animals, wild and domestic, living on the islands. It is the result of nearly 20 years of collaboration – both in St. Louis and with Ecuadorian partners.

“From our perspective, this is a giant breakthrough toward a commitment on the part of Galápagos to control the arrival of new pathogens and stay ever alert to monitoring,” said Patricia Parker, the E. Desmond Lee Endowed Professor of Zoological Studies at UMSL and senior scientist at the Zoo. “They can now respond quickly to any reported disease outbreak without having to send for international help or go through the bureaucracy involved in exporting samples, all of which adds costly time, thereby limiting their ability to respond effectively. It marks a huge step forward in being able to protect this irreplaceable environment.”

UMSL and the Zoo both provided training to technical staff members along with guidance in designing the new expanded facility. Marilyn Cruz, a longtime collaborator of Parker’s and now the director of ABG, reached out in 2016 to facilitate that support.

A team of researchers from UMSL and the University of Missouri–Columbia visited the Galápagos in 2016 and assisted with recommendations for better management of livestock on farms to prevent the spread of disease. Then a team of lab technicians and veterinarians from the Galápagos visited St. Louis last year. They divided their time between Parker’s lab at UMSL and the Saint Louis Zoo Endangered Species Research Center and Veterinary Hospital. They also spent a week at the University of Missouri College of Veterinary Medicine in Columbia, Missouri, where they visited local farms as well as the Veterinary Diagnostic Lab. They took their new knowledge and experiences back to the Galápagos and used them when designing the new facility.

ABG produced a 3-minute, 47-second video to highlight the new facility, and it thanked its partners in the United States. Watch the video here.

The video illustrates what successful collaboration looks like and is an example of how UMSL’s Whitney R. Harris World Ecology Center and the Saint Louis Zoo have been on the leading edge of global conservation. With their support, a new generation of Ecuadorian biologists in the Galápagos has developed skills and tools that will help protect the unique animal life of the World Heritage Site.