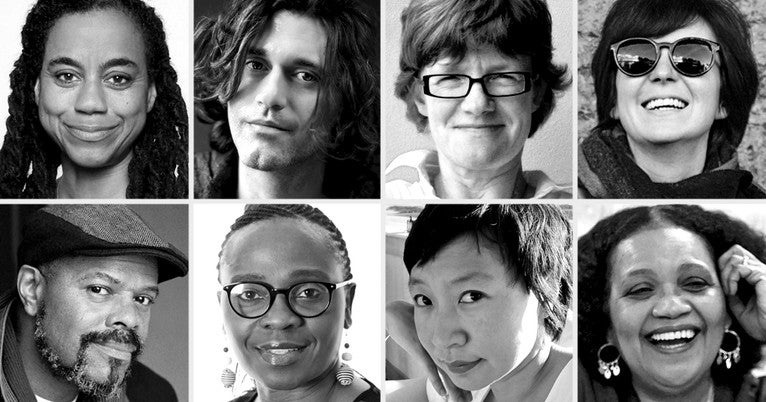 The 2018 recipients of the Windham-Campbell Literature Prizes will gather at Yale beginning Wednesday, Sept. 12, for a three-day literary festival to introduce their work to new audiences, share their insights and experiences, and celebrate the written word.

The festival will feature the world premiere of scenes from new plays by drama prize recipients Suzan-Lori Parks and Lucas Hnath, and a keynote address by poet, essayist, playwright, and educator Elizabeth Alexander ’84 B.A.

The full schedule of talks, discussions, and readings is available on the Windham-Campbell Prizes website. All events are free and open to the public.

“It is a writer’s prize, with a reader’s festival,” said Michael Kelleher, director of the Windham-Campbell Prizes. “We provide an open forum for some of the world’s best writers to share their work and engage in conversation with members of our community. The sense of camaraderie that develops between the prize recipients and festival-goers is always fun and inspiring.”

The festival begins at 5 p.m. on Sept. 12 with a prize ceremony at Sprague Hall, in which Yale President Peter Salovey will confer the awards. Alexander, who served on Yale’s faculty for 15 years and received an honorary doctorate of letters from the university in May, will deliver a keynote lecture based on the theme “Why I Write.”

Alexander’s keynote, written especially for the occasion, will be the basis for the next installment of the prize’s “Why I Write” series, published by Yale University Press (YUP). The series’ initial book, “Devotion,” based on Patti Smith’s keynote lecture at the 2016 festival, has sold more than 50,000 copies and is now available in paperback. “Inadvertent,” based on author Karl Ove Knausgaard’s keynote at last year’s festival, was released in hardcover on Sept. 4. To purchase copies, visit YUP’s website.

The prize recipients will spend Thursday and Friday discussing their craft and exploring a diverse range of topics at events moderated by Yale faculty and curators, as well as book publishers and academics from other institutions.

The New Haven Free Public Library, continuing its partnership with the Windham-Campbell Prizes, will host two events: On Thursday, Sept. 13, at noon, Parks, Hong, and Makumbi will participate in “Epic Transformations,” a conversation about ancient influences in contemporary works. On Friday, Sept. 14 at noon, Makumbi, Goodison, and Laing will join Kelleher for a discussion on the risks and rewards of writing about their families.

Prize recipients will engage with and discuss materials from Yale’s collections at several events. The Yale University Art Gallery and the Yale Center for British Art will host “Close Looking” sessions in which a prizewinner discusses the work of a specific artist. Keene will discuss his short story “Blues”— which imagines a one-night stand between Langston Hughes and the Mexican poet Xavier Villaurrutia — during a discussion on Friday at 2 p.m. at the Beinecke Rare Book & Manuscript Library. The event, one of two hosted by the library, will include materials from the Beinecke Library’s extensive Harlem Renaissance holdings.

The prize recipients will share short selections from their work at a reading on Thursday at 7:30 p.m. in the Yale Art Gallery’s auditorium. Between the talks and readings, prize recipients will visit New Haven’s Cooperative Arts & Humanities High School for a panel discussion and writing workshop.

The festival closes at 7:30 p.m. on Friday with the staged reading of new works by Parks and Hnath hosted by the Yale School of Drama in the art gallery’s auditorium. Hnath will direct scenes from his new work, “The Thin Place,” which will premiere in 2019 at the Humana Festival of New Plays. Oskar Eustis, artistic director of the Public Theater, will direct scenes from Parks’ Pulitzer Prize-winning play “Top Dog/Underdog” and from a new play, “White Noise,” which will premiere at the Public later this fall.

“We’re excited to present electrifying new works from two of the most important playwrights working in America today,” Kelleher said.

For a complete calendar of events, visit the Windham-Campbell Prize’s website.

The Windham-Campbell Prizes were established in 2013 by novelist and memoirist Donald Windham in memory of his partner of 40 years, Sandy M. Campbell, to call attention to literary achievement and provide writers working in English with the opportunity to focus on their work independent of financial concerns. Recipients receive $165,000. The prizes are administered by the Beinecke Library, which houses the Donald Windham and Sandy Campbell Papers.