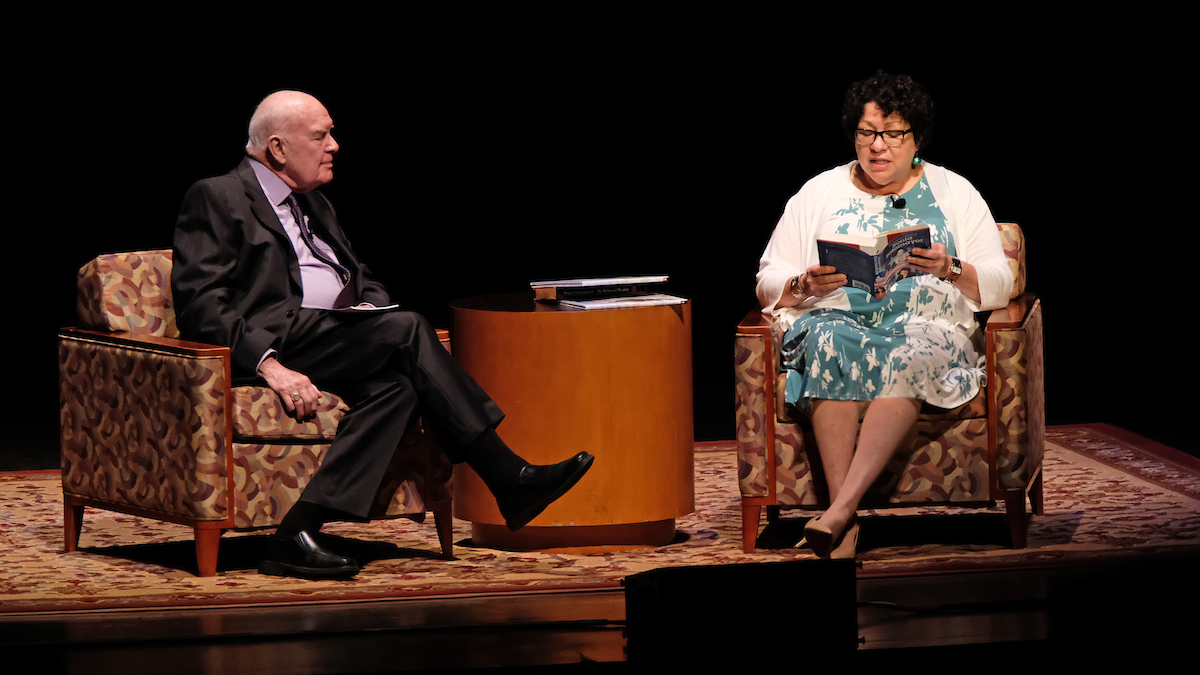 Supreme Court Justice Sonia Sotomayor (at right) reads a sentence from her new book, “The Beloved World of Sonia Sotomayor,” while appearing on stage with “St. Louis on the Air” host Don Marsh Thursday at the Blanche M. Touhill Performing Arts Center. (Photos by August Jennewein)

She wanted the chairs moved closer to the audience before she launched into an hourlong discussion moderated by “St. Louis on the Air” host Don Marsh in front of a sold-out crowd in the Anheuser-Busch Performance Hall.

It was fitting because Sotomayor was there to talk about her two new children’s books, “Turning Pages: My Life Story” and “The Beloved World of Sonia Sotomayor,” in an event sponsored by The Novel Neighbor bookstore, St. Louis Public Radio | 90.7 KWMU, the Washington University in St. Louis School of Law and UMSL.

Both works serve to bring her extraordinary life story within reach of youth.

She wrote both books after first penning the coming-of-age memoir “My Beloved World” for an adult audience, a project that began in 2010, less than a year after she became the first Latina appointed to the Supreme Court. 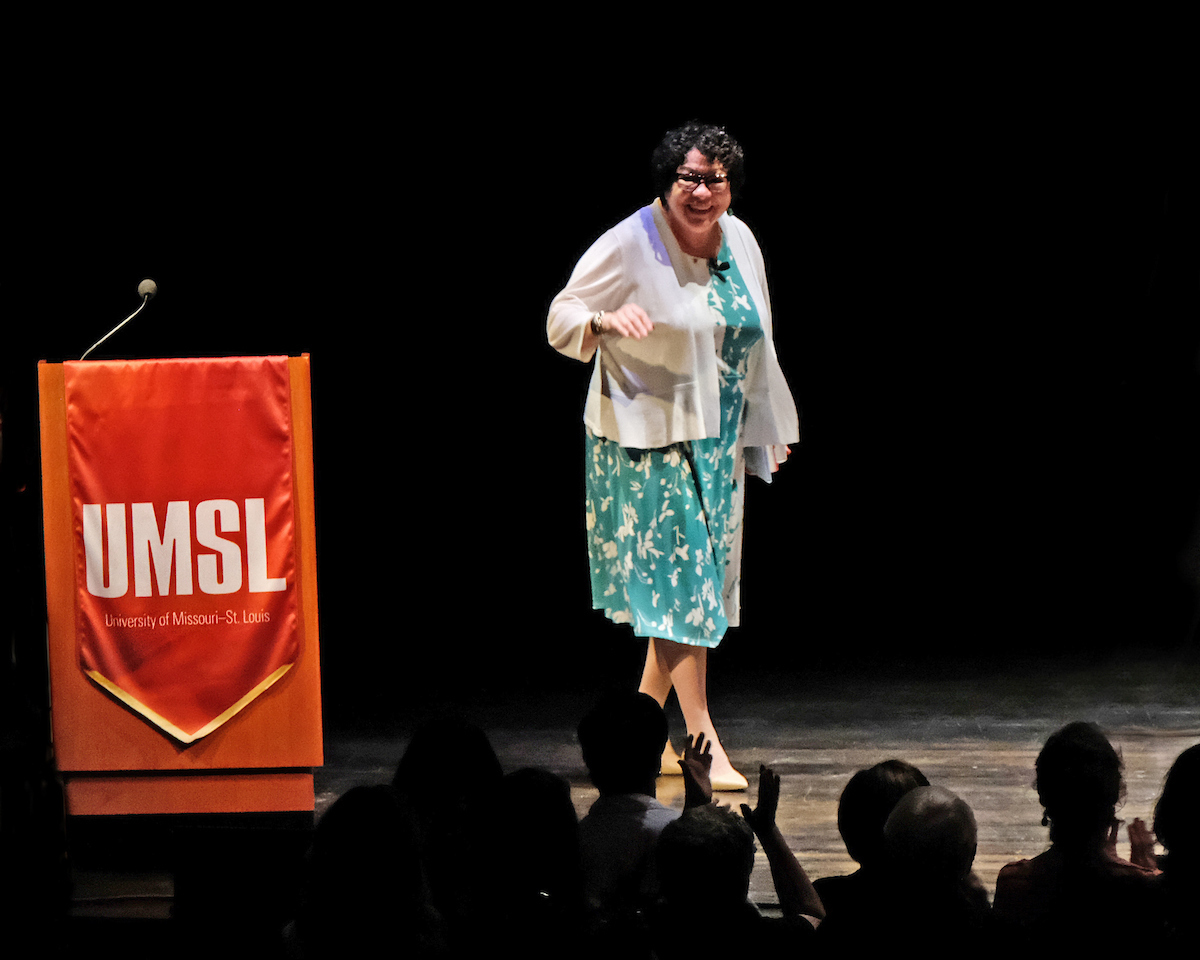 “It was a dramatic alteration in my life,” Sotomayor told Marsh and the assembled crowd. “I was catapulted from being sort of a pretty ordinary person – and I still am – but I was catapulted onto the world stage, and as exciting it is, it’s also scary. I was frightened about what could happen to me, to Sonia.

“Power corrupts and absolute power corrupts absolutely, and I became very frightened that in this world I would lose who I was. I realized that the only way for me to hang on was to memorialize my life and to remember so I could never forget how I got to where I was.”

With the success of “My Beloved World” after its release in 2014, and at the urging of a cousin who’s a bilingual educator in Stamford, Connecticut, Sotomayor has adapted it into “The Beloved World of Sonia Sotomayor” for a middle-school-aged audience.

“Turning Pages” has brought her story to an even younger audience.

Both books were released on Tuesday.

“The reason for all of these books, and maybe right now, is on Page 2 of the middle school book,” Sotomayor said. “It’s also in the adult book, and I’ll read the line so people will understand it. ‘People’ – and people, you know, includes children, right? – ‘who live in difficult circumstances need to know that happy endings are possible.’ My life hasn’t been always easy.”

Sotomayor wasn’t satisfied to remain sitting on the stage as her conversation with Marsh dived deeper into some of the many struggles she endured – including growing up poor in the Bronx, New York, getting diagnosed with juvenile diabetes at age 7 and losing her father to an untimely death two years later – on her journey to the nation’s highest court.

She made her way through the audience – accompanied by the federal marshals in her security detail – posing for pictures and answering a mix of pre-submitted and spontaneous questions from children in attendance.

Sotomayor especially connected with two girls diagnosed with juvenile diabetes. She gave the older girl a message of encouragement after hearing that she’d learned how to give herself insulin shots.

“You will want the freedom to travel the world by yourself,” Sotomayor said. “If you don’t have to, that’s OK. If you don’t want to, that’s OK. But you want the freedom to make that choice, and the only way you can have that freedom is by learning how to care for yourself. When you have a question, you can always ask your mom or your doctor or the nurse practitioner who’s taking care of you. This is not a condition that will stop you from doing anything. The only thing that will stop you is your own fear.”

The audience recognized Sotomayor as proof of that.

Sotomayor spent more than two hours signing books in the lobby of the Touhill after Thursday evening’s program.