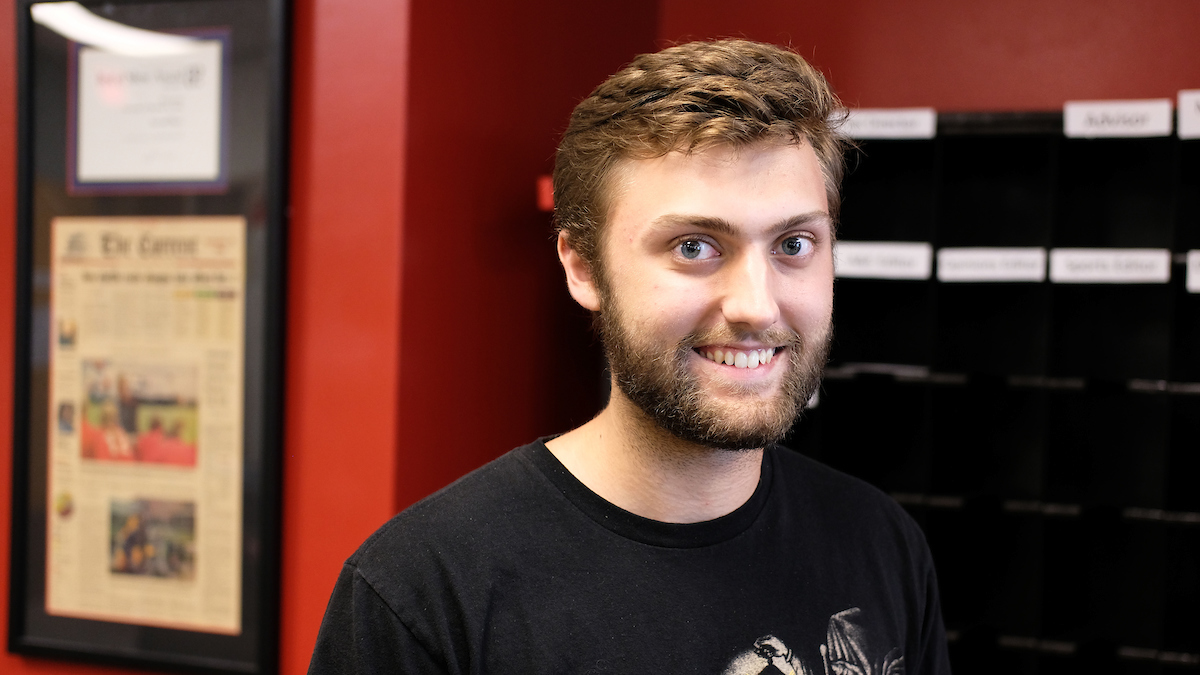 Communication major Dustin Steinhoff has been honing his journalism skills while working as an intern at the Riverfront Times and serving as the news editor at The Current. Steinhoff received the Ronald W. Wade Journalism Scholarship from the St. Louis Press Club and St. Louis Post-Dispatch. (Photos by August Jennewein)

It’s hardly the easiest time to break into the field of journalism. Too often in recent years the pages of newspapers have contained stories of their own downsizing, and even reporters who keep their jobs can find financial security elusive.

But Dustin Steinhoff remains hopeful he can carve out a place in the news industry after he completes his degree at the University of Missouri–St. Louis.

Steinhoff, who is majoring in communication with a minor in media studies, has been honing his skills since transferring to UMSL from St. Charles Community College last year. 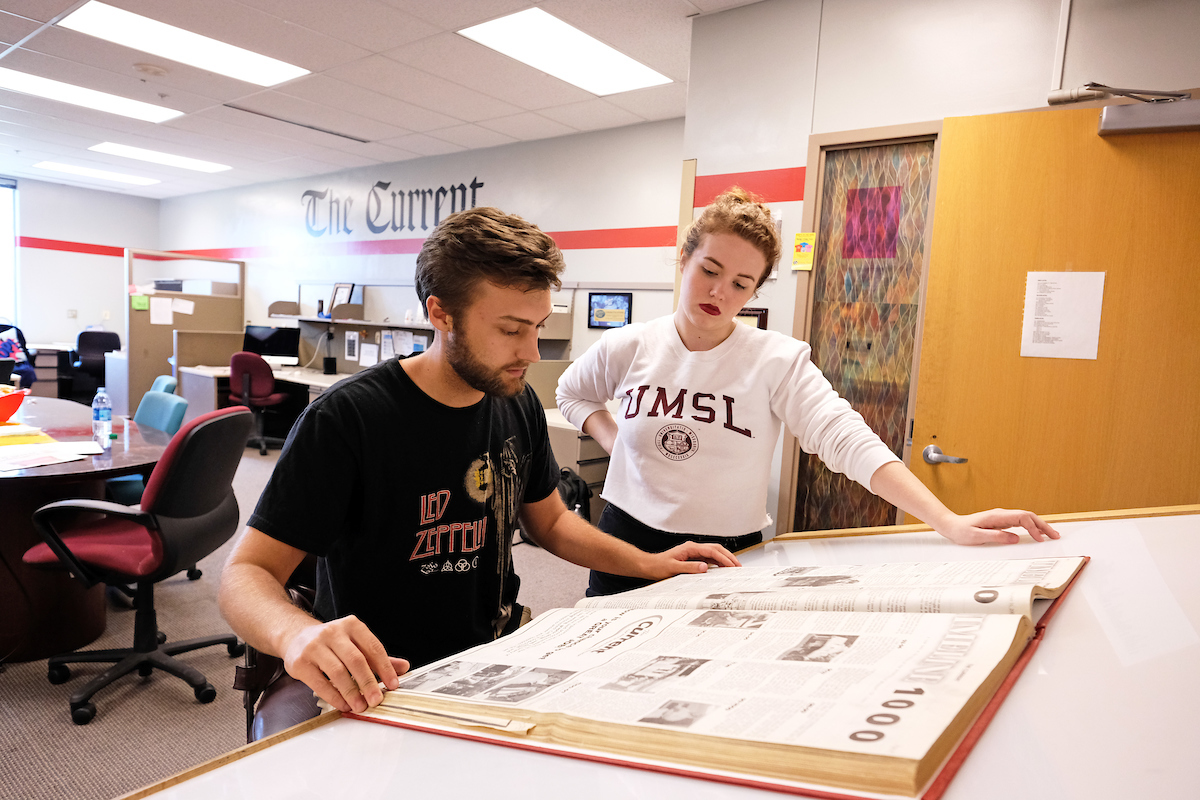 News editor Dustin Steinhoff (at left) and advertising director Alexis Peterson peruse the archives in The Current office in the Millennium Student Center.

He began working as a reporter for The Current, UMSL’s independent student newspaper, last winter and this semester has taken over the position of news editor. His byline ran on both stories on the front page of last week’s issue.

This summer the St. Louis Press Club and St. Louis Post-Dispatch awarded him the Ronald W. Wade Journalism Scholarship. The $2,500 prize is named in honor of Wade, the late Post-Dispatch night news editor who died in 2017, and is intended to help future journalists get the education and training they need to start their careers.

Steinhoff also recently landed a competitive internship position at the Riverfront Times. He filed his first story on his first day last week, writing about how the abrupt cancellation of LouFest was affecting restaurateurs who had committed to the event.

Ryan Krull, assistant teaching professor in the Department of Communication and Media and who serves as faculty advisor to The Current, is not surprised to see Steinhoff jumping right in to capitalize on an opportunity.

“He’s sort of impervious to the kind of social pressure and awkwardness that can prevent a lot of student reporters from actually going out and doing good reporting,” Krull said. “He’s not afraid to talk to people. He’s not afraid to cold call people, to actually go knock on doors, even if he’s unsure who’s going to answer. That really sets him apart.

Steinhoff traces his interest in news reporting to his time as a student at Timberland High School in Wentzville, Missouri. He’s not sure if it was to fulfill a fine art credit or some other reason, but he enrolled in a journalism class his junior year and immediately loved it.

He joined the staff of the school’s monthly paper and served as its news editor his senior year.

After receiving his diploma, Steinhoff enrolled SCC while taking part in the A+ Scholarship Program, which provides funding to eligible graduates of A+ designated high schools who attend a participating public community college or vocational or technical school.

The only downside to his experience at SCC was that the campus lacked a student newspaper, with the SCCougar having ceased publication in 2014.

“I just missed it really, not having something like that to work on,” Steinhoff said.

It took him about a semester to find his way into The Current office after transferring to UMSL last year.

He filed a couple movie reviews and covered several events, but mostly he wrote news stories, typically dedicating between five and 10 hours each week to his work.

The staff at student-run newspapers is constantly changing with graduations and other experiences pulling people away from established roles. When news editor Joseph Salamon was finishing his degree last spring, he recommended Steinhoff apply for the position.

Steinhoff landed the job and has been working in concert with editor-in-chief Katelyn Chostner to produce the paper since the summer.

“He’s obviously a good writer, good reporter,” Krull said. “He’s also got a soft touch in terms of working with other people. He’s good at delegating tasks and coming up with stories for other people to report, too.”

Steinhoff was following the recommendation of another former Current editor, Kat Riddler, when he applied for a scholarship from the St. Louis Press Club. She’d received multiple awards from the club during her time as an undergraduate.

The Wade Journalism Scholarship was still an unexpected prize when Steinhoff received it.

“I was just really honored to be the recipient of this award,” Steinhoff said. “I got to meet his family at the scholarship luncheon in June. They were all wonderful. I’m hoping to keep in contact with them in the future.”