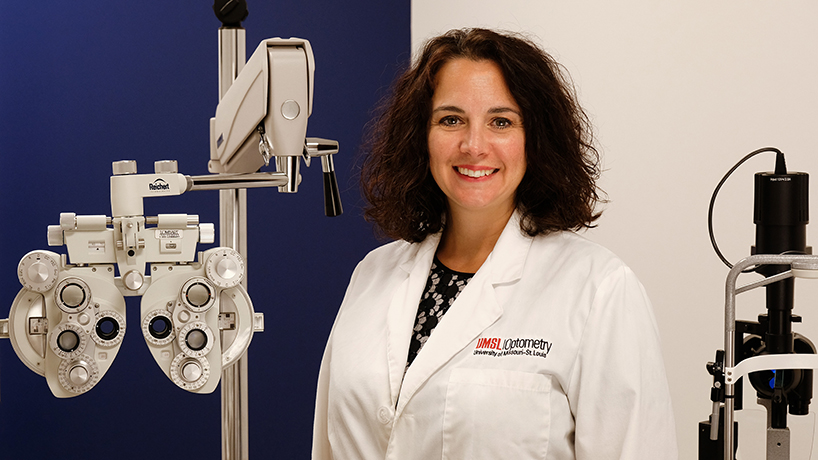 Julie DeKinder will serve a three-year, renewable term as a council member on the optometric education accrediting body. (Photo by August Jennewein)

Some weeks had passed since she had interviewed to serve on the Accreditation Council on Optometric Education, and ­the University of Missouri–St. Louis College of Optometry associate clinical professor thought she had probably not been appointed to the position. She had almost forgotten about it but, curious who had been selected, decided to check the listing.

Turns out she had jumped the gun. The ACOE chair called that evening with the good news and also asked DeKinder to chair the optometric residency program committee. She was delighted to officially find out – though not as surprised as she might have been.

The ACOE is the accrediting body for optometric degree, resident and technician programs and sets standards that evolve alongside the profession. Through the accreditation process, the council reinforces its standards with site visits. DeKinder is one of 11 members.

“Part of the reason that I was hopeful to become a council member was that I really do have a strong passion for the accreditation process,” DeKinder said. “I think when we are educating people to become doctors that there have to be some rules and standards in place. And every school or college should be striving not just to meet them but to exceed them and push them forward.”

DeKinder was already quite familiar with the ACOE. She trained in 2005 as a site consultant and served as team chair for numerous site visits, primarily to residencies, and was a member of the same committee she is now chairing.

She views her new position as service toward the profession. As a site consultant, DeKinder gained acute insights into the standards and was able to help the College of Optometry prepare for reaccreditation.

“It has really allowed me to move our cornea and contact lens residency program at UMSL forward and improve it, made me think about it in different ways,” DeKinder said. “I get to see what other programs are doing and what has worked there and what doesn’t. And it has helped how I work with our affiliated residency programs and our two in-house programs, one of which I’m the coordinator for.”

DeKinder holds UMSL’s program close to her heart as someone who completed that residency. After graduating optometry school in her home state of Oklahoma, DeKinder decided if she was going to a residency program, it would be UMSL or nowhere.

To explain why, she picked up a book sitting on top of her desk. It was the “Clinical Manual of Contact Lenses” by Edward Bennett and Vinita Henry, now two of her colleagues at UMSL.

“They literally wrote the book on contact lenses,” DeKinder said. “It really was, and I still think is, the best program in the nation. I’m completely biased, I’m sure, but I’m very proud of our program. I went through it, and it’s opened every door I could have wanted it to.”

While finishing her residency, a faculty position opened up, and DeKinder applied. Fourteen years later, she has embraced a variety of roles in optometry. She is not only an instructor and a practitioner but also the director of academic and residency programs as well as chief of contact lens service.

It’s just like DeKinder to be invested in a range of activities. That’s true too in her personal life, where she has hobby of  “not repeating” any state half marathon, and her family has set ambitious goals to visit every U.S. baseball park and national park.

Upon meeting glasses-wearing individuals, she might immediately try to convince them to come to the contact lens clinic for their problematic eyes. And DeKinder is interested in a whole host of off-the-beaten-path lenses, like scleral contacts that extend onto the eye whites or some with hard centers and soft skirts.

“There’s very cool soft contact lenses that can be made hand painted if a person has some sort of opacity in one eye,” DeKinder said. “They can be painted to change that eye’s appearance to look just like that other eye so no one would know. Lots of amazing options out there that people don’t realize are available to them.”

DeKinder feels lucky to work in an academic setting where she is able to practice exactly how she wants to. Every day she sees unique and challenging cases she might not encounter in a private-practice setting. But what she relishes most is the transformative nature of her profession.

“When you fit specialty contact lenses as an optometrist, you have an opportunity to literally give vision back to someone who maybe hasn’t had it for several years,” DeKinder said. “I think that’s what initially drew me to it, just knowing the major impact you can have on people’s lives.”