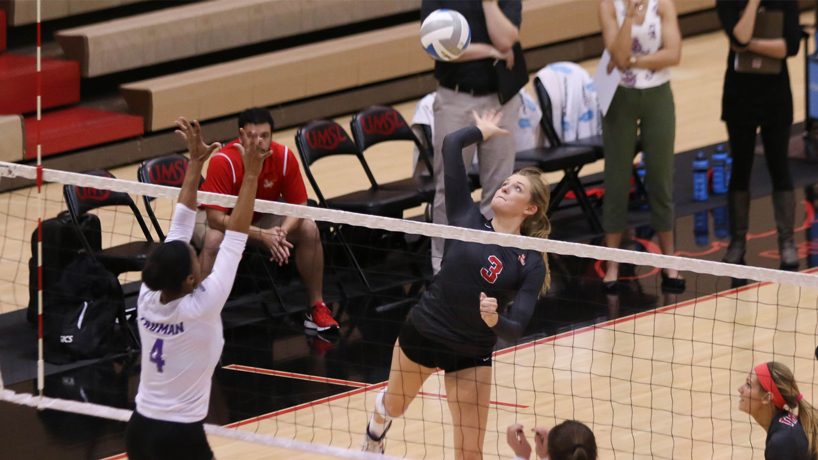 Senior middle blocker Alex Miner logged seven kills and four blocks as UMSL swept conference foe Southern Indiana on Saturday, moving the Tritons to 6-4 on the season with a 2-0 record in the Great Lakes Valley Conference.

Volleyball
UMSL opened Great Lakes Valley Conference play with wins over Bellarmine on Friday and Southern Indiana on Saturday. Junior Selena Nolte averaged  5.71 kills per set while hitting at a .349 clip, while freshman Megan Woll averaged 6.86 digs per set. The Tritons (6-4, 2-0 GLVC) travel to No. 5 ranked-Lewis this Tuesday before returning home to host Missouri University of Science and Technology and No. 22 Drury on Friday and Saturday.

Men’s Soccer
UMSL lost its second straight overtime game Sunday, falling to Newman 2-1. Junior Donald Link scored for the Tritons, finding the back of the net early in the second half to knot the score at 1. UMSL (1-2) begins GLVC play at home this weekend, playing host to No. 14 Indianapolis on Friday and Drury on Sunday.

Men’s and Women’s Swimming
UMSL opened the 2018-19 season Saturday in the inaugural St. Louis Showcase, competing against Lindenwood and McKendree. All three teams were challenged to swim in Olympic format during the meet. Tritons junior Gabo Jimenez had three top-10 finishes, coming in fifth in the 50-meter butterfly, seventh in the 50-meter freestyle and sixth in the 50-meter backstroke. UMSL will compete at the Show-Me Showdown, hosted by the University of Missouri–Columbia, on Oct. 5.