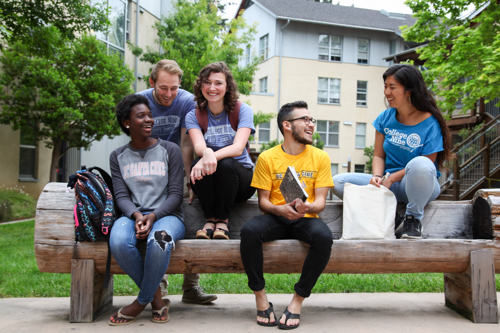 Boosted by its success in helping students achieve social mobility, UC Santa Cruz jumped this year to among the top 30 public national universities, as ranked by U.S. News & World Report. UC Santa Cruz came in at No. 26, moving up from 33rd last year.

The campus also ranked 70th among more than 300 national universities, up from 81st last year.

For the first time, U.S. News and World Report’s ranking included social mobility among its measures, looking at both Pell Grant graduation rates and how they compare to all other students. Students receiving Pell Grants typically come from households than earn less than $50,000 annually.

“We’ve long been a leader in scholarship and research, but educational opportunity and access are also central to our mission,” said Chancellor George Blumenthal. “Our faculty and staff work hard to make sure that all students in our diverse student body have a chance to rise on their own merits. It’s fantastic to see our approach, and our success, recognized.”

No California State University campus or member of the American Association of Universities had both a higher percentage of Pell enrollees and a higher Pell graduation rate than any UC campus, the UC system reported.

The campus received high marks for its diversity, as well, earning a spot on a list that looks at ethnic diversity at national universities. US News and World Report’s diversity index for UC Santa Cruz was .72—with the closer to 1.0 meaning a student is more likely to run into students from a different ethnic group.

U.S. News and World Report also recognized UC Santa Cruz for its commitment to undergraduate education, putting the campus among the top 30 national universities. The ranking is based on what universities were cited most often by college presidents, provosts, and admissions deans.

The campus ranked 37th on a list of best colleges for veterans.

The appeal of UC Santa Cruz has never been stronger. Last year, the campus received more than 67,000 applications from high school seniors and community college students. The fall 2019 application is now open.