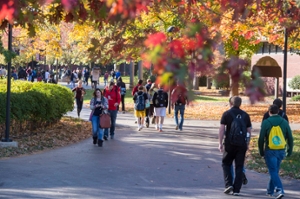 U.S. News & World Report ranks Southern Illinois University Edwardsville among the best Regional Universities Midwest for the 15th consecutive year and among the top 15 public universities in that category. The listing is in the magazine’s “Best Colleges of 2019” issue that was released today.

SIUE was featured at number 72 in this year’s rankings of 165 Regional Universities Midwest. The University is 14th overall among public universities in that category. The U.S. News overall scores are based on the reputation of SIUE in higher education, graduation and retention rates, faculty resources, student selectivity, financial resources and alumni giving.

“We appreciate being include in US News listings again this year, and their attempts to highlight specific strengths of regional and national higher education institutions,” said Scott Belobrajdic, associate vice chancellor for enrollment management. “We also understand each student and each family make their college selection decision based on personal preferences and goals, which can’t possibly be captured in a surveys such as this. We encourage students and their families to visit campus, and explore their fit at SIUE.”

The SIUE School of Engineering also was ranked 57th among the top 205 undergraduate engineering schools nationally.

The SIUE School of Nursing (SON) posted record enrollment for the fall 2018 semester with 1,701 students enrolled in its doctoral, master’s and baccalaureate programs. SIUE also set a record for online enrollment by increasing one percent. Another highlight included a record 249 doctoral students enrolled, a 21 percent increase (44 students) over last year.

Regional universities are considered to have a full range of undergraduate majors and master’s programs, but few doctoral programs. The 656 universities in this category are ranked against their peer group in one of four geo­graphic regions (North, South, Midwest and West), because they tend to draw students most heavily from surrounding states.