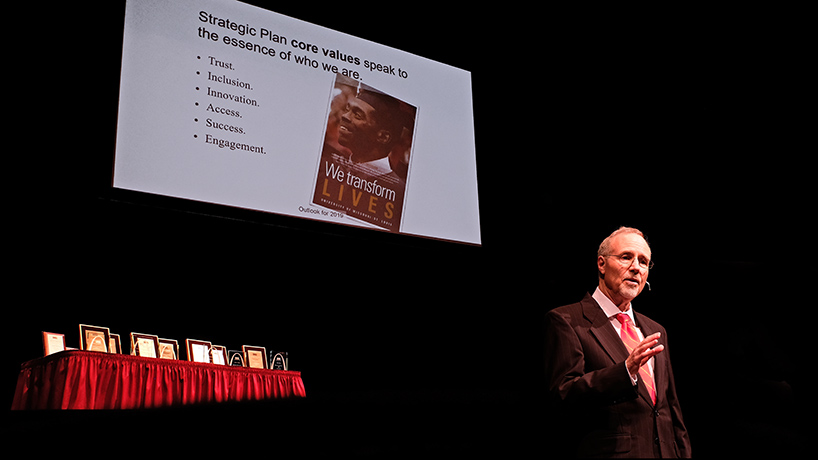 The University of Missouri–St. Louis is poised to expand its role as the region’s largest public research institution by educating more students and better facilitating economic development and community renewal, Chancellor Tom George said during his annual State of the University Address on Wednesday.

George told an audience of students, faculty, staff and supporters at UMSL’s Blanche M. Touhill Performing Arts Center that the institution had “realized a budget surplus for the second consecutive year.” UMSL’s budget balance increased 49 percent to $38 million. UMSL has an annual operating budget of about $200 million.

“We are now focused on investments rather than cuts,” George said. “Tough decisions and strong fiscal management have positioned us well as we introduce a new Strategic Plan that – among other things – calls for increasing enrollment by 1,000 students over five years.”

The new plan also streamlines UMSL’s mission statement to “We Transform Lives,” which George said highlights “the essence of our efforts and our existence.” Increasing student retention rates, advancing diversity and inclusion, community engagement and economic development also are primary compacts with the plan, which the University of Missouri System Board of Curators will consider for approval when it meets Sept. 20.

People from across the campus community turned out to hear Chancellor Tom George deliver his State of the University Address on Wednesday in the Anheuser-Busch Performance Hall at the Blanche M. Touhill Performing Arts Center.

“I encourage you to read the Strategic Plan,” George said. “Know our mission statement and know your role in transforming the lives of our students and community.”

The address included a video that reinforced the importance of UMSL’s new mission and the essential role faculty and staff have in its successful implementation.

“UMSL is a tremendous educational value, but unfortunately we still find that the cost presents a hardship for too many students in this community,” George said. “Working with the UM System, UMSL will develop and launch a special effort to dramatically increase giving for annual and endowed scholarships.”

Other highlights of George’s presentation included: