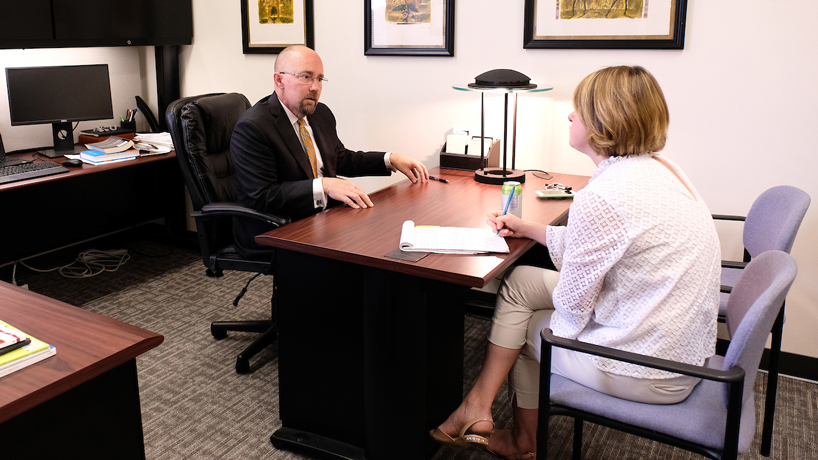 Paul Evensen (at left) meets with Lisa Clancy in his office in the the Public Policy Research Center. The center is being reinvented as the Community Innovation and Action Center, which builds on the foundation of the PPRC while incorporating the work of Social Innovation STL, which Evensen founded in 2015. (Photo by August Jennewein)

The University of Missouri–St. Louis is committing to help strengthen the nonprofit community in St. Louis with the formation of the Community Innovation and Action Center.

It builds on the foundation of the Public Policy Research Center, which has been a leading source of applied policy research for the civic and public communities of metropolitan St. Louis and the state of Missouri over the past 25 years. It also incorporates the work of Social Innovation STL to forge bold and innovative programs, organizations and collective efforts to tackle challenges in the St. Louis region.

The reinvented center will continue to work to inform and influence policymaking to achieve optimal outcomes. It will aim to supply data needed for the decision-making process and strengthen partnerships so policies are implemented in effective ways. But it will do so less with an eye on individual analysis and more on the collective impact of multiple policies and programs implemented together to achieve a shared result. That requires a different kind of analysis and data, so the center will look to build on lessons from the past.

“Our job is mainly to be a convener,” said Paul Evensen, who serves as the center’s director. “We create the infrastructure for the nonprofit sector to work more effectively – the Saint Louis Regional Data Alliance, partnership performance, and real estate strategies are examples.

Evensen founded Social Innovation STL with a similar mission in mind in 2015. He brought his team to UMSL in April and began the process of reimagining the scope of the work of the Public Policy Research Center.

Chancellor Tom George highlighted the Community Innovation and Action Center during his annual State of the University Address on Wednesday afternoon at the Blanche M. Touhill Performing Arts Center.

“The center will fundamentally change UMSL’s support of and engagement with nonprofits and governments and help build stronger communities,” George said.

Evensen and his team are scheduled to move into recently renovated space at UMSL at Grand Center, putting them closer to many of their partner organizations. They will share quarters with the Community Builders Network of Metro St. Louis, Thread STL, Invest STL and the Saint Louis Regional Data Alliance, but they will continue to retain a strong presence on the UMSL campus.

“Community is the first word in the name for a reason as we want the Community Innovation and Action Center to be as nimble and responsive to our community as possible,” Provost and Executive Vice Chancellor for Academic Affairs Kristin Sobolik said. “I am excited to see the center expand UMSL’s engagement with our community through directed, applied research and support.”