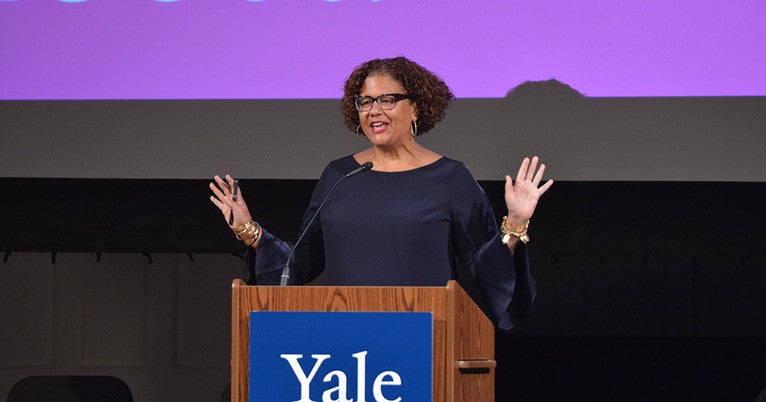 So intense was her grief after her husband’s sudden death that noted poet Elizabeth Alexander ’84 could only produce what she calls “animal sounds” when she first put pen to paper to write of her experience.

Those “sounds” eventually became sentence fragments, then full sentences, and finally a published memoir of her married life with Ficre Ghebreyesus titled “The Light of the World,” a finalist for a Pulitzer Prize in 2016.

For Alexander, who recited her original poem “Praise Song for the Day” at the 2009 inauguration of President Barack Obama, the memoir was a new genre — one that allowed her to move through her loss to carry on as a mother, a writer, a mentor, and more, she said during the Sept. 12 award ceremony for the Windham-Campbell Prizes. Alexander delivered the keynote address, titled “Why I Write,” to kick off the literary celebration in honor of the eight prizewinners.

“I did not feel the writing was cathartic,” said Alexander, who became president of the Andrew W. Mellon Foundation earlier this year and was a professor at Yale 2000-2015.  “I did not feel like I had written a book of poems. But I knew I had written my way through a stretch on the road of my life that was a necessary step forward to the next station, the next stage.”

In her address in Sprague Memorial Hall, Alexander shared the many reasons that she has devoted herself to writing. One of these, she said, is “to perceive what I am living.”

She traced a “hunger for words” back to early in her childhood. When she was two, she’s been told, her mother came in to find her with books and magazines in her crib, trying so hard to “read” in the dark that she broke out into a sweat. Later, she recalled, she would read everything from “trashy” magazines to T.S. Eliot’s “The Wasteland,” developing a “poetic sensibility” both as she read and as she listened to her parents’ records, including jazz music and albums by artists as varied as Frank Sinatra, Janis Joplin, and the Supremes.

Her inspiration to write blossomed further at Yale, where she was the sole undergraduate in the graduate seminar “Problems in the Study of Afro-American Literature,” taught by literature professor Michael Cooke ’57.  In that class, she met Gloria Naylor GRD ’83 and other writers who would become her mentors. Naylor, Alexander said, taught her “to be alert to possibility and to be fiercely attentive,” and also advised her: “Take your language to the bone.” After poet Michael Harper gave a reading in her classroom, Alexander kept in touch with him, and he, too, gave advice and encouraged her in her literary pursuits. From both Naylor and Harper, Alexander said, she also learned to honor her black ancestors.

“I write because people took the time to teach me, and I sought out the people who could teach me,” Alexander told her audience.

I listen to everything and feel all that listening makes me feel. I write because sound lives and moves in my body.

She shared two music excerpts during her talk: Aretha Franklin’s “Day Dreaming” and Shirley Horn’s “You Won’t Forget Me” (featuring Miles Davis on horn). She said Franklin’s musical shifts and pacing, as well as the way she covers others’ songs, has been an inspiration to her as a poet. Of Horn’s song, which Alexander sometimes listens to more than once a day, she said she is still contemplating all that the song means, including the question of how people “stay with us after they’ve left us.”

Alexander said another reason she writes is to “make things that aspire to music” and to “replicate funkiness,” a feeling that for her is captured in memories of Washington, D.C. in the summertime in the 1970s — where and while she was growing up.

Alexander, who co-designed a fund to transform the criminal justice system while she was director of creativity and free expression at the Ford Foundation, ended her speech describing some of the depravations she witnessed of prisoners at Louisiana’s maximum-security Angola prison, where most of the inmates are black and where many have life sentences. She told of one convict whose sentence was overturned after he spent 41 years in solitary confinement, dying just three days after he was released.

“I write to bear witness,” said Alexander. “I write because I am free, because it is my responsibility.”

While Horn’s song played, Alexander noted that “our lives are not books lined up from end to end; our lives have many turns and contours.” She told her audience that her reasons for writing are the same as for so many other writers who have come before her:

After Alexander’s address, President Peter Salovey read the citations for the winners of this year’s winners of Windham Campbell Prizes: Sarah Blakewell and Olivia Laing in nonfiction; Lorna Goodison and Cathy Park Hong in poetry; Lucas Hnath and Suzan-Lori Parks in drama; and John Keene and Jennifer Nansubuga Makumbi in fiction. In 2010, novelist Donald Windham left the bulk of his estate to Yale to establish the literary prize in honor of his lifelong partner, Sandy M. Campbell. Each prizewinner is given $165,000 for the year to have the freedom to write without having to be concerned about their means of support. The prizewinners spend several days on campus reading from their own works and participating in talks and other events. For more information and a schedule of events, visit the Windham Campbell Prize website.