Have a bagel with Jonathan Sarna

Jonathan Sarna is an expert in American Jewish History. In a Q&A, the University Professor applies his expertise to the rise of bagels in American culture. 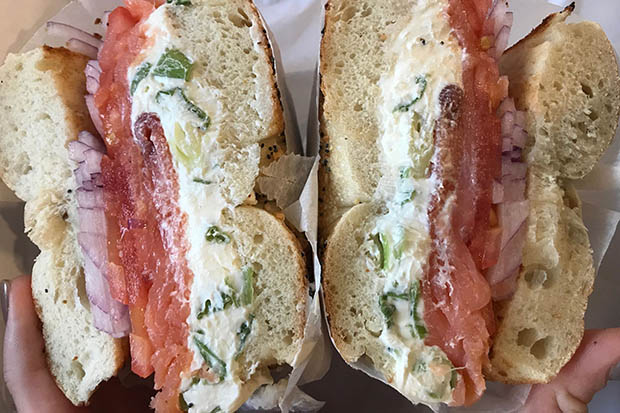 An everything bagel with scallion cream cheese, lox, tomato and onion from La Bagel Delight in Brooklyn Heights, New York.

Bagels are a staple in many Americans’ diets, and the chewy, doughy concoctions have been in the spotlight in recent weeks.

A rogue bagel order may partially be to blame for Cynthia Nixon’s loss in the New York gubernatorial primary, though to be fair, Nixon was distantly trailing Gov. Andrew Cuomo before she was caught on video ordering a cinnamon-raisin bagel with cream cheese and lox.

Meanwhile, at Brandeis, where bagels are available for purchase at three locations, community members are getting set to devour an assortment of foods – including the doughy, ring-shaped delights – at the annual Break the Fast feast on Wednesday to mark the end of Yom Kippur.

The truth about bagels’ Jewish roots is not as clear-cut as you might expect. BrandeisNOW caught up with University Professor Jonathan Sarna, an expert on American Jewish history, to better understand how the bagel rose from an ethnic nosh consumed by the few into a mass-produced behemoth enjoyed by the many.

BrandeisNOW: Even before we begin to talk about the bagel in American culture, its origins are somewhat disputed. It is written in some places that it originated in Poland…

Jonathan Sarna: Some literature says Poland or German land but that’s all semantics. Poland’s boundaries shift over time. The most recent scholarly article says that the bagel originated in Eastern Europe sometime before the year 1500.

So “bagel” as a term goes back a long way but it’s clear that those were very different kinds of foods, more like breaded pretzels. In an old Hebrew book of customs, for example, you also hear about eating “three beygls” for breakfast, which seems to have been a kind of bread-like pastry.

The proof that bagels aren’t a traditional Jewish food is actually in Israel, where there are very few bagel stores which have all opened recently and aren’t very good. Often when you tell an Israeli about bagels they think you’re talking about pretzels, which is a reminder of how this so-called traditional food was really shaped by developments in the United States, where the bagel as we know it now was born.

BNOW: What is the early history of bagels in America?

Sarna: In many cases– and it’s true of bagels – these were not traditional Jewish foods in the way they are now described. Bagels were something that particular individuals from particular places brought to America. Some of these immigrants turned bagels into a business by persuading consumers that this is what they knew in Europe. In reality, as so often the case with ethnic foods,  American bagels are much bigger than their European cousins.

Bagels were quite local in the Americas for a very long time, past World War II. Indeed, you still hear them being a local food item even today in the way that say, Montreal natives think their version of the bagel is better than those available in New York.

BNOW: So how did bagels go from local commodity into something so widespread?

Sarna: The person who is most-credited for making bagels a national item is Murray Lender of New Haven. The Lender family figured out how to mass produce, freeze and ship bagels and thanks to advertising they helped make bagels into a broadly-accepted food.

However, anyone who compares Lender’s bagels with the boiled bagels of an earlier day knows that there’s a difference – it would be like comparing frozen pizza or noodles to  authentic Italian and Chinese cuisine.

Many people who bought such bagels at a chain or frozen in grocery stores knew that they were a poor imitation of what the immigrant generation knew.

BNOW: There has been much debate for some time about proper bagel toppings. Can you shed some light on the cream cheese and lox phenomenon?

Sarna: No one knows who the genius was who thought up bagels, lox and cream cheese. However, it is not an age-old combination, as many non-Jews believe. The reality is that cream cheese, as we know it, was a technological breakthrough and you did not have bagels and cream cheese until that development occurred, in the 1920s.

The combination of bagels, lox and cream cheese seems to take off in the post-war era. An interesting thesis about its rise states that Jews were looking for a Jewish equivalent to the breakfast foods, like bacon, that Christians consumed on Sundays.

BNOW: What are the implications of bagels being a food with Jewish roots?

Sarna: I think American Jews look at bagels as one of their gastronomic contributions to American society. Bagels began within the Jewish community and then moved out to become a food that Americans of all kinds enjoy.

Jonathan Sarna ’75 MA’75 is the Joseph H. and Belle R. Braun Professor of American Jewish History and the director of the Schusterman Center for Israel Studies