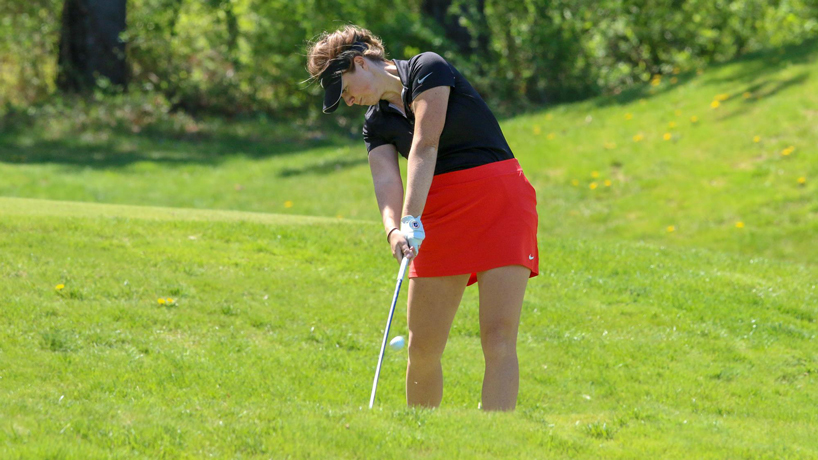 Junior Emma Thorngren finished in a tie for 12th individually Monday and Tuesday at the UIndy Invitational in Carmel, Indiana. She tied her own school record by shooting 221 over 54 holes. UMSL opened its 2018-19 season with a seventh-place finish as a team, shooting a school-record 906.

Women’s Golf
Junior Emma Thorngren tied her own 54-hole school record of 221 last Monday and Tuesday as the Tritons opened the 2018-19 season at the UIndy Invitational in Carmel, Indiana. She finished in a tie for 12th place individually while helping UMSL to a seventh-place finish in a 15-team field that featured eight teams ranked in the top 25 nationally. As a team, the Tritons shot a school-record 906. UMSL returns to the links September 29 and 30 at the Gilda’s Club Laker Invite hosted by Grand Valley State in Grand Rapids, Michigan.

Volleyball
UMSL went 1-2 last week with a thrilling five-set win over Missouri S&T and two losses came to nationally ranked opponents: No. 5 Lewis and No. 17 Drury. In the win over S&T, freshman Megan Woll recorded 40 digs, the second most by a Great Lakes Valley Conference player this season. Junior Kylie Rudsinski averaged 2.8 kills and 1.0 blocks per set. UMSL (7-6, 3-2 GLVC) opens a four-game road swing on Friday at Illinois Springfield and travels to McKendree on Saturday.

Men’s Soccer
UMSL rebounded from a 1-0, double-overtime loss to No. 11 Indianapolis on Friday by posting a 1-0 overtime win over Drury on Sunday. The Tritons, who have played four straight overtime games, got a game-winning penalty kick from junior Magnus Anderson against Drury. Junior Nedin Kudic got his first two starts in goal, totaling 13 saves. UMSL (2-3, 1-1) plays at William Jewell and Rockhurst this Friday and Sunday.

Women’s Soccer
UMSL snapped a three-game losing streak Sunday with a 1-0 win over Drury after freshman Maya Ware converted a second-half penalty kick for her first collegiate goal. The Tritons were edged by Indianapolis, 1-0, in their GLVC opener on Friday. UMSL (2-3, 1-1) plays at William Jewell and Rockhurst this Friday and Sunday.

Women’s Tennis
Junior Marina Prediger advanced to the quarterfinals of the ITA Midwest Regional this weekend to lead the Tritons. Senior Salome Bleuler reached the round of 16 in singles, while the duo of Bleuler and Prediger reached the quarterfinals in doubles play. UMSL closes out its fall schedule October 5 and 6, hosting the UMSL Fall Tournament.