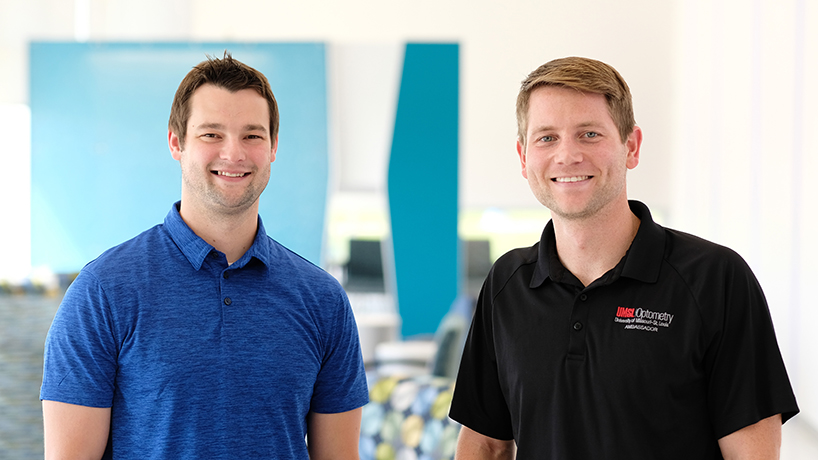 When he got the call from Army medical recruiting, University of Missouri–St. Louis student Stephen Wells could barely muster words.

The U.S. Army selected Wells and his College of Optometry classmate Kyle Carnahan for the F. Edward Hébert Armed Forces Health Professions Scholarship Program. They were two of three 2018 honorees for the three-year HPSP, open to all American citizens living in the U.S. and abroad. It covers full tuition reimbursement plus other benefits, and optometry, medical, dental, veterinary and psychiatric nurse practitioner students are eligible to apply.

Wells and Carnahan follow in a burgeoning UMSL tradition. The Army chose four students from the last two optometry classes for the scholarship.

Carnahan and Wells are both former college baseball players, and Cunningham believes their experiences in athletics helped their applications.

“We look at the graduate exam scores, the GPA, then being well-rounded and the athletic piece,” he said. “Generally speaking, some of the students we’ve had have been collegiate athletes at pretty high levels. They’ve taken roles as leaders within those organizations, and that sets them apart from their peers.”

Carnahan and Wells discovered the HPSP in different ways. Medical recruiters at Washburn University put the idea in Carnahan’s head while he was an undergraduate student there. When he ran into a different recruiter during the optometry orientation at UMSL, he decided to apply.

This was actually Wells’ second round. After not receiving a Navy HPSP, he decided to try again with the Army. He had already completed the paperwork.

The application process is intense. Applicants go through a daylong military entrance processing station physical and a security clearance check that generally goes back 10 years in addition to reams of paperwork.

“It probably takes a good three to five months just to get everything done,” Wells said. “And you’re like, ‘Am I done?’ and they’re like, ‘Nope, we got more paperwork for you.’ It’s definitely good to get started as soon as possible. Even if you’re just thinking about it and kind of on the edge, just start the paperwork.”

Commissioned as lieutenants while in school, Carnahan and Wells will be promoted to captain upon graduation on the merits of their education.

“While they are in the program, what they are considered is reservists, but they don’t do anything but go to school,” Cunningham said. “The whole point is for them to go to school and not worry about the financial burden that comes with it.”

During the summer, the two can attend a direct commissioning course, which teaches the “customs, courtesy and history” of the military. Upon graduation, they will be given a duty assignment, and the Army will work with them to achieve a good fit. Both will be paired with mentors to guide them in their new roles as officers.

“That’s more of the developmental piece, what we do with mentorship in the Army, and then beyond that they are actually going to a captain career course, which teaches them how to be a strong leader on top of being a commissioned officer,” Cunningham said. “There are multiple steps beyond that, but they are going to have one of the most unique careers as optometrists, especially as opposed to their civilian counterparts.”

Cunningham gave the example of a dietitian who was also a battalion commander to illustrate the unique leadership opportunities inherent in military medical service.

In addition to leadership opportunities, Wells and Carnahan look forward to the advantages of practicing in the military, like full-scope care without the concerns of civilian insurance and certification that stretches across states and bases. Plus, there are their individual optometric interests, like Wells’ fascination with ocular disease and technological advances.

“Something that I’m really interested in is getting into more contact varieties for a lot of those active-duty people who are really active, making sure that they have the best vision that they can get, and finding ways to fit them in something that will feel really good while they’re out doing whatever they are doing,” said Carnahan. “I’m just grateful that there is this opportunity to serve the country and get a scholarship for that.”