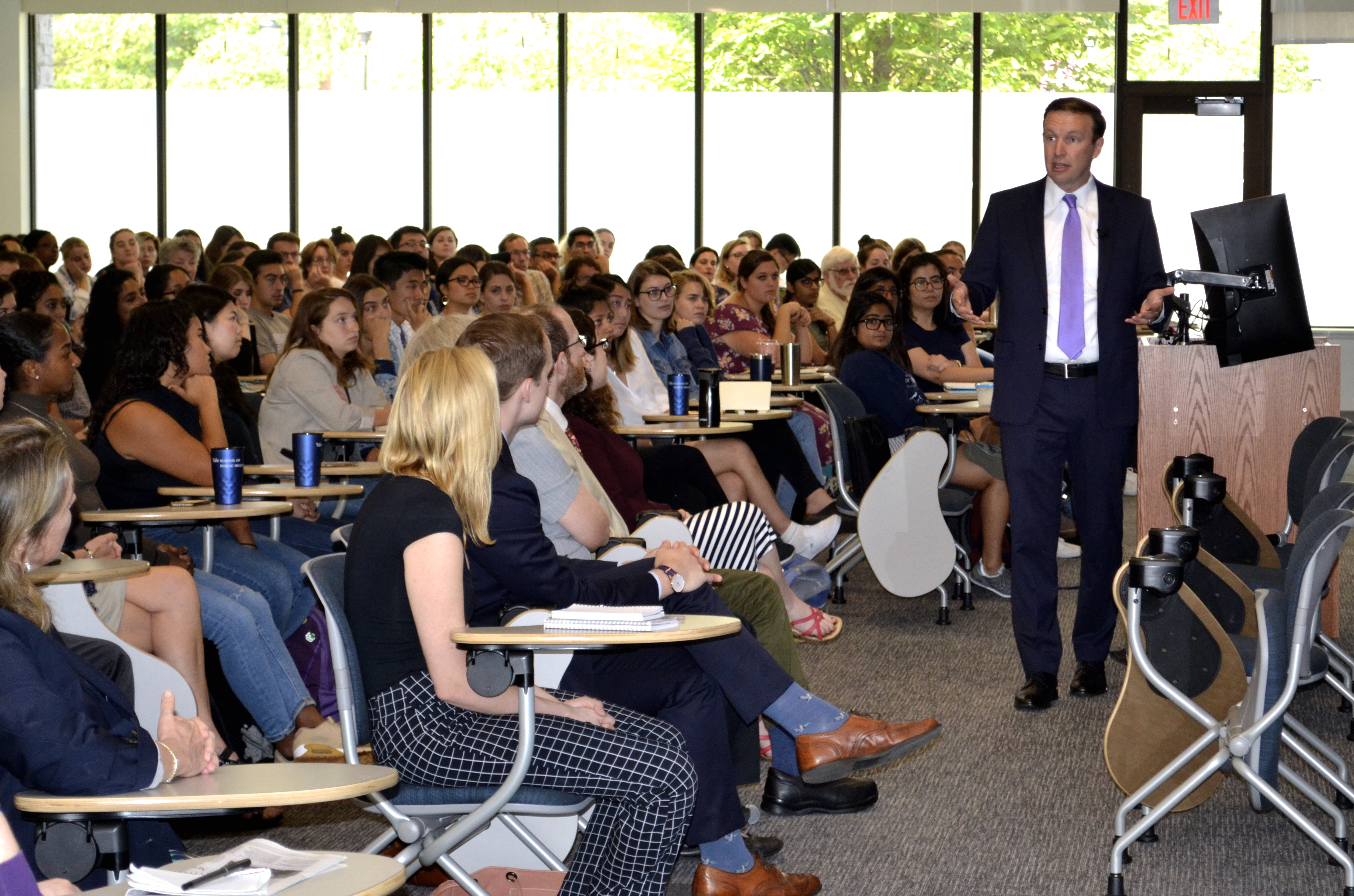 In a visit to the Yale School of Public Health on Monday, U.S. Sen. Chris Murphy defended the Affordable Care Act and spoke about “buttressing” its gains with new legislation that makes Medicare directly available to every citizen.

“We’ve made enormous progress since we passed the Affordable Care Act,” Murphy, D-CT, told a standing room-only crowd of some 200 people He cited a sharp rise in the number of people with health coverage and a sharp drop in the number of personal bankruptcies due to a health crisis.

But, he noted, a formidable group of lawmakers and political leaders remain deeply opposed to the ACA and are committed to finding ways to gut it.

“You should be worried,” Murphy said. “There is an extraordinary amount of sabotage that is happening. How long, how long can we hang on?”

In addition to defending the gains made by the ACA over the past several years, Connecticut’s junior senator outlined ways that these gains can be expanded in the year’s ahead.

His senate colleague, Bernie Sanders, advocates barring private insurance from health care and implementing a mandated single-payer-for-all system. Murphy, meanwhile, supports an alternative proposal, one that would arrive at essentially the same place as Sanders’ model, but would take a different route in getting there.

Murphy’s described his bill as a “universal Medicare buy-in law,” which would give consumers the option of Medicare along with an array of private insurance options.

“Let the people decide,” he said. “If our theory is correct, people will choose Medicare. You will have a natural transition over time.”

His approach, he said, is a little slower that what Sanders wants, but it is more natural and also more politically palatable.

Shelley Geballe, an assistant clinical professor at the Yale School of Public Health who invited Murphy to appear, mentioned in her introduction of Murphy his summertime tradition of walking across Connecticut (about 125 miles over a period of several days) to meet and listen to his constituents.

If our theory is correct, people will choose Medicare. You will have a natural transition over time.

“I can’t think of a better way to represent Connecticut,” Geballe said. “He represents Connecticut with great dignity.”

Murphy described the walks as “grounding,” giving him an opportunity to connect with people in Connecticut’s small towns and urban areas that he might not hear from otherwise. He said he sees fear in peoples’ faces over what might happen to them and their families if gains in health care are reversed.

“More than anything else, they are talking to me about health care, about the feeling that they are losing control over this system. They are paying more and they don’t feel that they are getting much more,” Murphy said. “They thought that they had protection, and now see politicians in Washington trying to rip it away.”

Dean Sten Vermund, arriving back at the school minutes before the talk started from a trip to Africa, said he was thrilled to have Murphy at the Yale School of Public Health.

“Senator Murphy is one of the folks in Congress who is exquisitely sensitive to public health issues. He speaks out on these issues all the time,” Vermund said.

Yale School of Public Health Professor Robert Dubrow asked Murphy, a leading advocate of gun control, if the country was starting to turn the corner on that front.

“I do think we are making enormous progress,” Murphy said. “[Gun violence] is a public health epidemic. This issue is of increasing importance for more and more people.”

In additional to the many people killed outright by guns, large numbers of young people, primarily in underserved neighborhoods, are traumatized by the consistent violence and their ability to learn and do well in school is affected.

In closing, the senator urged the scores of young people gathered before him to remain in Connecticut after graduation and help create a better state.

“Stay in Connecticut and help us solve these problems,” he said. “It’s an awesome place to live and to raise a family, but it has tons of challenges.”

This article was submitted by Denise Meyer on September 18, 2018.