Elias Rosenfeld ’20 just wants to have the same worries as most college students. Worries about exams, papers and projects.

Instead, he wakes up every day wondering whether breaking news will change his life.

“I check the Google alerts every morning not knowing if a news story will say I can’t be here anymore,” he said.

Rosenfeld is a DACA recipient. DACA, the acronym for Deferred Action for Childhood Arrivals, an executive order issued by former President Barack Obama, allowed some 800,000 children brought to this country with their parents to continue living in the U.S. without fear of deportation, even though it did not carve out a path to citizenship. 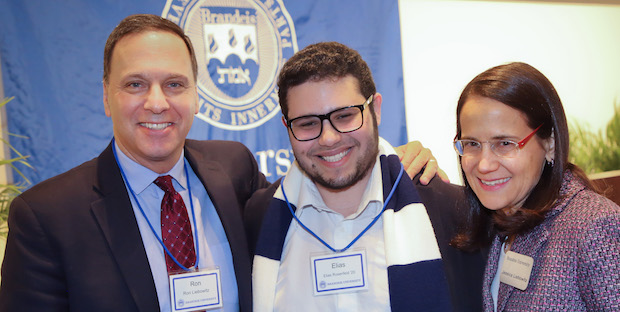 Rosenfeld immigrated to the United States from Venezuela with his mother, father and sister when he was 6 years old via a visa granted to his mother through a program for business executives. While some things took getting used to (“I couldn’t believe I could just walk out in the street,” he recalled), Rosenfeld adjusted to life in America quickly. His family moved into a home in Weston, Florida owned by his grandfather, where they had previously vacationed. He started school in kindergarten and despite a language gap, caught up with his classmates quickly.

“I had a pretty normal life,” he said.

That changed when he was in sixth grade. His mother died of cancer after a two-year battle. Compounding the tragedy, her death meant that Rosenfeld and his older sister were no longer protected by her visa status. Suddenly, they were living in the U.S. without documentation. Their father never explained that their immigration status had changed.

Rosenfeld thought he was living the life of an ordinary teenager in America, until he tried to apply for a driving learner’s permit. “I couldn’t even fill out the paperwork,” he said. “I thought maybe something wasn’t quite right before, but it wasn’t until that moment that I knew for sure.”

At first he was upset with his father for not telling him about the reality of his situation, but these days he directs his focus elsewhere. “When I was young I had anger toward him, but now it’s anger toward the system because I know it so well,” Rosenfeld said.

Yet even before he even knew of his complicated immigration status, Rosenfeld had developed a passion for politics — particularly immigration-related issues. He advocated for changes to laws regarding healthcare for immigrant children in Florida, and interned at a state senator’s office even before starting high school.

“I’ve never feared speaking out,” Rosenfeld said. “I know there could be consequences, but I also know that 800,000 lives wouldn’t have been changed if people before me got scared and didn’t pressure the president to pass DACA.”

Crucially, DACA also allowed him to attend college here, which would have been far more difficult without its protections. The undocumented immigrants who pushed for changes leading up to DACA further fueled his passion for politics and advocacy that had taken root in middle school. In high school, Rosenfeld established United Student Immigrants, an advocacy coalition for young students.

“If people don’t know our stories, then they don’t see the complexity of the issue and they won’t pressure their legislators,” he said. 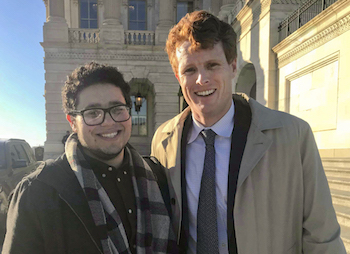 When it came to considering colleges, Rosenfeld was drawn to Brandeis in part because of its history and commitment to social justice.

“I knew the school would have my community’s back for sure,” he said.

It was also appealing because of the location. It’s proximity to Boston would give him an opportunity to connect with Massachusetts politicians whose values aligned with his own, and New Hampshire, a notorious political battleground, is only 30 miles away.

Rosenfeld fellow for Hillary Clinton’s 2016 presidential campaign in New Hampshire. His advocacy kicked into high gear with Donald Trump’s election because he promised his supporters vast changes to immigration policies, including termination of the program that guaranteed Rosenfeld protection.

One of Rosenfeld’s first calls was to Risa Levine ’83, a lawyer and advocate for infertility issues who sits on the board of the national infertility association RESOLVE. Rosenfeld met Levine at a Brandeis Democrats event in 2016, where she told the personal story that led her to advocacy. Although decades apart in age, the pair has sparked an unlikely friendship.

“We found we had so many things in common,” Levine said. “We shared the same outlook. It was wild to find each other.”

Levine helped Rosenfeld get legal representation to prepare for potential changes to his status, but that was only the beginning. The pair talks or exchanges messages almost every day.

“There is not a day that goes by that he’s not doing something to pursue a greater sense of justice in this country, and his knowledge is with such a mature and sophisticated eye,” Levine said. “He’s a real gift to Brandeis.”

Not long after the 2016 election, Rosenfeld got involved with the university coalition of FWD.us, an immigrant advocacy group established by Facebook CEO Mark Zuckerberg. In 2017, he completed a summer internship with the organization in Washington, D.C. When President Donald Trump announced the end of DACA in September, Rosenfeld found himself in a unique position to tell his story publicly. He has made the most of it. He gave media interviews and spoke at a rally that day, and he hasn’t let up since.

“I knew from that day forward I was going to be deeply involved with the movement,” he said.

DACA program recipients, known as “Dreamers,” after a similar program that would have paved the way for U.S. citizenship, have been on an anxiety-laden roller coaster ride since Trump became president. Both Democrats and Republicans have disappointed Rosenfeld with their inaction, and he takes every opportunity to let them know. Regularly shuttling between Brandeis and Washington, he tells his story at rallies, and in TV and newspaper interviews. He’s met with political leaders from both parties, including Republican Senator Ted Cruz and Democratic Senator Elizabeth Warren.

Next, Rosenfeld is looking to establish a new coalition to target upcoming congressional elections, and he wants to make connections with Republican lawmakers who he hopes to convince to support the cause. He’s also lobbied hundreds of members of congress and done a national speaking tour to mobilize Jewish communities across the country.

“It’s exhausting. It can feel like I’m always under pressure,” Rosenfeld said. “But then I think about the people who fought to get DACA passed in the first place. Going to college was impossible for them. DACA made it possible for me. That’s what drives me. I don’t want people to have to walk in my shoes.”