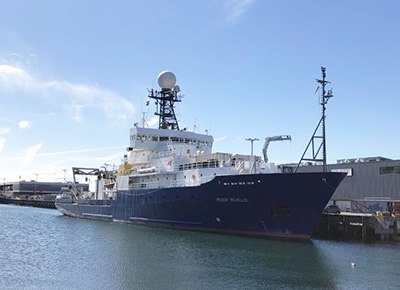 The 277-foot R/V Roger Revelle is the home, laboratory, and transportation for the 59 scientists and crew studying ocean chemistry between Alaska and Tahiti. Here the Revelle sits in port at Smith Cove in Seattle, Washington, during preparations for more than two months at sea. (Photo by Alex Fox)

Ocean scientist Phoebe Lam is one of three chief scientists on the U.S. GEOTRACES GP15 cruise.

Many trace elements, such as iron, are critical for marine life and influence the functioning of ocean ecosystems and the global carbon cycle. Some trace elements (mercury, for example) are also of concern as contaminants, while others, together with a diverse array of isotopes, are used by scientists to study ocean processes and the role of the ocean in climate change.

An international program called GEOTRACES aims to improve the understanding of trace elements and their isotopes in the marine environment, including their large-scale distribution and how they cycle through biological, geological, and chemical processes.

Phoebe Lam, associate professor of ocean sciences at UC Santa Cruz, is a chief scientist on the U.S. GEOTRACES GP15 cruise, which will be studying the Pacific Ocean along a line of longitude (152° W) from Alaska to Tahiti from September 18 to November 24. This is the fourth U.S. GEOTRACES cruise, and Lam’s lab has been involved in all of them. This time, she is participating both as a chief scientist helping to coordinate the whole operation and as a principal investigator overseeing her lab’s research project.

“The GEOTRACES cruises have really revolutionized our understanding of trace elements,” she said. “It’s a huge operation. I’m one of three cruise leaders, and there are over 26 research groups to coordinate.”

Joining the scientists and crew as the shipboard science communicator will be Alex Fox, who graduated in June from the UC Santa Cruz Science Communication Program. Fox will be writing blog posts for the cruise web site and posting on social media throughout the cruise.

This cruise will support a large variety of individual science projects to study the chemical and biological interactions of trace elements, with some research being conducted on board the ship by the 45 participants, and additional research to be done at participating academic laboratories across the country.

“The oceans are so under-sampled we discover new features on each cruise that force us to reconsider what we think we know about the chemistry of the oceans,” Lam said.

Lam’s lab focuses on measuring particles in the water column and studying their role in the cycling of trace elements. She will be in charge of a pumping system that will be deployed from the ship to filter large volumes of sea water and collect particles of different sizes. The samples collected by the pumping system will be distributed among 16 different research groups.

“What’s exciting about GEOTRACES is that we’re all sampling the same waters and measuring different things, so it becomes a really rich data set,” Lam said. “The same ocean processes have to explain all our observations, so after the cruise when we have workshops and start to put it all together, that’s the really fun part.”

The other chief scientists on the cruise are Karen Casciotti at Stanford University and Greg Cutter at Old Dominion University. The ship, the R/V Roger Revelle, departed from Seattle on September 18, headed for Kodiak, Alaska. It will make one stop in Hilo, Hawaii, before the expedition ends at Papeete, Tahiti. This research is funded by the National Science Foundation.

Want to learn more about this cruise?