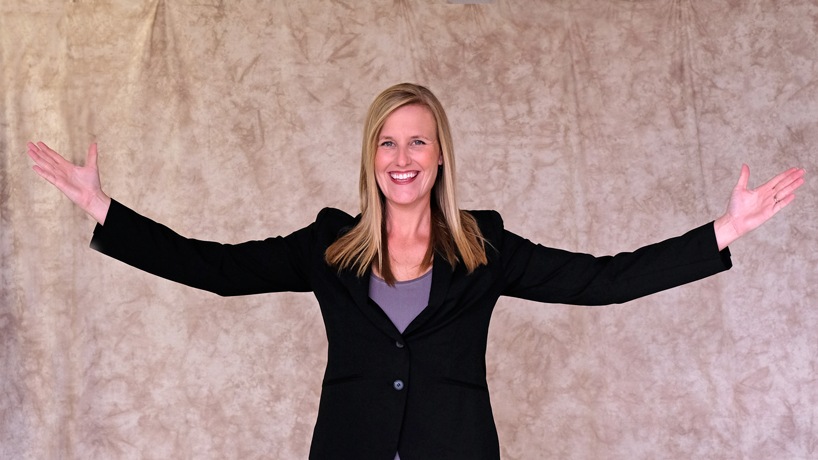 Shelly Parks, a 2006 MEd graduate of the UMSL College of Education, is the 2019 Missouri Teacher of the Year. Parks has been an English language arts teacher at Francis Howell North High School since 2002. (Photo by August Jennewein)

Shelly Parks started to get a pretty good idea of what was going on Aug. 28 as she approached the doors of the Francis Howell North High School gymnasium.

The band had just blasted out the opening bars of the school fight song, and she could hear uproarious cheers coming from the packed bleachers. After walking through a column of cheerleaders, she paused a moment to take in the scene, then turned the corner and shared an embrace with her husband and three children.

Parks thought she was going to the gym for a TV interview about being named a finalist in the 2019 Missouri State Teacher of the Year competition. Upon taking in the raucous scene, she knew she was the teacher of the year.

“I had no idea. I found out right in that moment,” said Parks, a 2006 MEd graduate of the University of Missouri–St. Louis. “If there was no video footage, I wouldn’t believe it. It still feels like it’s just this dream.”

Parks has worked as an English language arts teacher at Francis Howell North since 2002. She has served as department chair since 2009 and been the school’s student council sponsor since 2003.

She wanted to go into education because of her mother, who recently retired after 40 years as a public-school educator in Missouri, and she wanted to teach English because she has always been captivated by the things you can learn about yourself, others and the world around you through reading and writing.

“I love the English classroom because I feel like, through kids’ writing and reading and our discussion, you just get to know them so much more,” Parks said. “I feel like I’m always talking to them about being good human beings. We’re definitely working on grammar, reading, writing and all that entails, but I also just want them to be good, kind humans.”

The UMSL College of Education appealed to Parks as a young educator because the MEd in secondary education program featured an English emphasis area. It would allow her to take courses in education and English alongside electives that appealed to her.

The one on Bob Dylan’s song lyrics as poetry was a particular standout.

“I loved my professors, I loved the classes. It was wonderful,” Parks said. “I felt like the emphasis on research was really awesome at UMSL. Instead of just content knowledge, it was more practical application that I could take straight to the classroom. And it was cool because I was already teaching, so I could learn and then walk right into my classroom and try it out.”

Parks describes her classroom as a “cooperative learning” space, which allows her students to take a team approach to learning the content while building a community of respect among peers.

The way in which she inspires her students was a large part of her appeal to the Missouri Department of Elementary and Secondary Education teacher of the year selection panel.

“Because of her passion for education and her dedication to personal growth, (Parks) continues to be the most impactful teacher she can be,” Emily Pagano, a former student of Parks’ and current English language arts teacher at Fort Zumwalt East High School, said in a DESE press release. “She leads by example, encouraging her colleagues to be the best teachers for their students as well. Her passion for teaching is contagious, and her positive impact is widespread.”

Now, Parks gets to spread that message even further as Missouri’s representative in the National Teacher of the Year competition, which will be decided in April. Her calendar is already filling up with events – a trip to the state capitol Oct. 22 and one to the White House in the spring – seminars such as the Google for Education training session in February in California and various speaking engagements.

Parks has heard to expect 50 to 70 days away from campus over the course of the school year, which is a bit of a disappointment for someone who derives so much joy out of being in a classroom setting.

She prefers this to the alternative, though.

“I did not feel very confident about my interview with the panel,” Parks said. “I left saying, ‘Eh, I’m probably not their girl.’ So it was truly a shock when they told me.”