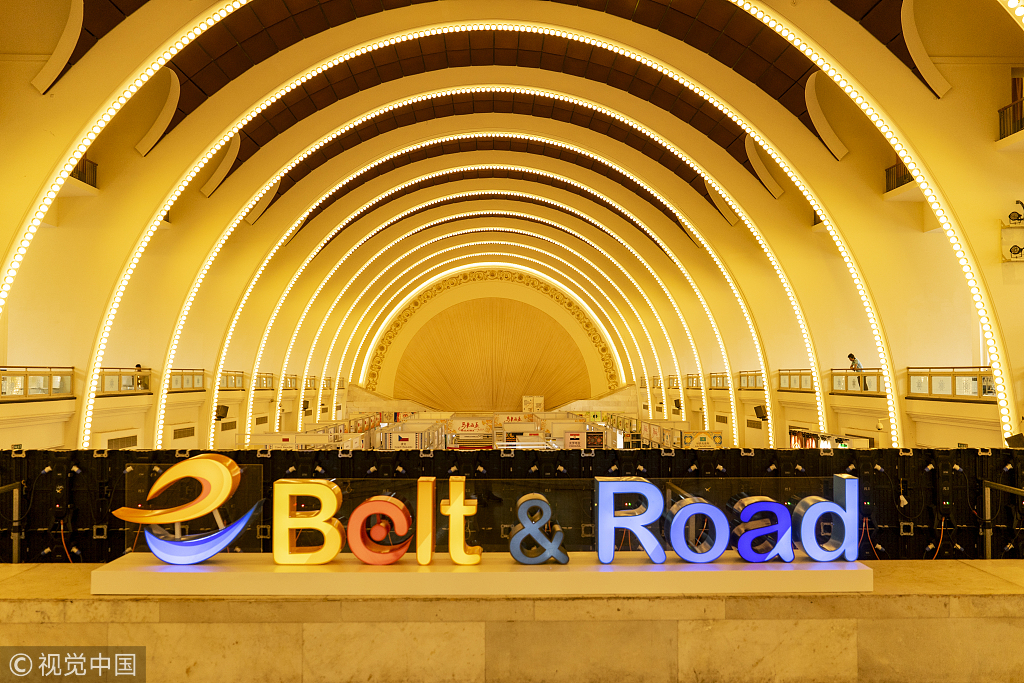 A logo for the Belt and Road Initiative is seen at an expo in Shanghai on June 30, 2018. [Photo/VCG]

China’s trade with and investments in African countries are now part of its Belt and Road Initiative, which President Xi Jinping proposed in 2013. Under the Belt and Road Initiative, China has been providing loans for and investing in a large number of infrastructure development projects, whose aim is to improve the trade and transportation networks on the African continent. These networks will enhance Africa’s trade links with the Middle East, Europe and Asia.

The European Union and the United States are carefully monitoring the rapid growth of economic and diplomatic ties between African countries and China. While Europe is still Africa’s largest economic partner, both regions have lost parts of their trade shares to China since 2000. The volume of China’s investment in Africa now far exceeds those of the US and the EU.

Historical links between Europe and Africa have led to a mixed legacy of colonialism, development aid and various free-trade agreements. Until recently, Europe’s interest in Africa was primarily driven by economic self-interest, as the EU tried to maximize export and investment opportunities for European business interests in Africa. From this perspective it is not surprising for Europe to be concerned about rising Africa-China economic ties.

In more recent years, however, the growing flood of African illegal migrants and refugees has altered Europe’s priorities for engagement with Africa. Now European leaders are more interested in seeing a genuine improvement in the standards of livings of African countries. And only a genuine improvement in the development and quality of life in Africa can reduce the flow of African refugees into Europe in the long run.

Furthermore, most of Chinese investment projects in Africa are not competing with or substituting European investments. To the contrary, they are complementary to the trade and investment opportunities for Europe. During the past four decades, China has developed a substantial engineering and construction capacity, which is far larger than its domestic needs because most of its internal infrastructure projects have already been completed.

China is using this excess engineering capacity for building roads, railways and commercial ports in Africa and other developing regions. These investments in African countries will expand the continent’s production and trade capacity.

Better infrastructure facilities will make Africa a more attractive trade and investment partner for European enterprises. Also, China is financing these projects through its own domestic financial institutions and the Asian Infrastructure Investment Bank. China is the main investor in the AIIB. In the absence of China, these projects would not have been financed by African governments or by any public or private institutions in the EU. Therefore, it is not justified to argue that Chinese enterprises are stealing profitable investment opportunities from EU and US companies.

If the EU is truly convinced that the economic development of Africa is in its interest then it should complement Chinese investments with projects and programs that fill the gap in Chinese projects to ensure maximum development gain for the continent. For example, China is being criticized for focusing on capacity creation for trade and export of natural resources at the expense of education, healthcare and improvement in governance.

Rather than obstructing China’s investments, the EU should step in to address the continent’s deficiencies in these areas so that the African countries can take maximum advantage of the trade and transport capacity that China is developing for them. The EU can also assist the continent in making government institutions more efficient and providing advanced financial, managerial and communications technologies that will complement China’s infrastructure projects.

The author is a faculty at Brandeis University. He is affiliated with the Crown Center for Middle East Studies and the Department of Economics in that university.