On a Thursday afternoon at the Rose Art Museum in Waltham, I’m watching Tuesday Smillie watch her artwork go up. All around her in the museum’s airy entrance hall hang banners that she stitched by hand. Some bear slogans of protest, while others read like poetry, or diary entries.

One of the banners is brown, with red lettering obscured by ripples in the cloth. But as we draw closer, the folds reveal themselves as pieces of lace, expertly shaped to resemble shadows. Smillie, who was born in Boston and is now based in Brooklyn, points out bits of jewelry stitched painstakingly into the fabric: “I think I worked on this piece for, like, three weeks.”

The banner is a replica of one that was carried in the 1973 New York City Christopher Street Liberation Day march — a precursor to today’s Pride parades — by an organization called Street Transvestites Action Revolutionaries, or STAR. Smillie’s artwork is based on a photograph of that march: In it, two activists stand on either side of a banner, fists raised in a revolutionary salute. 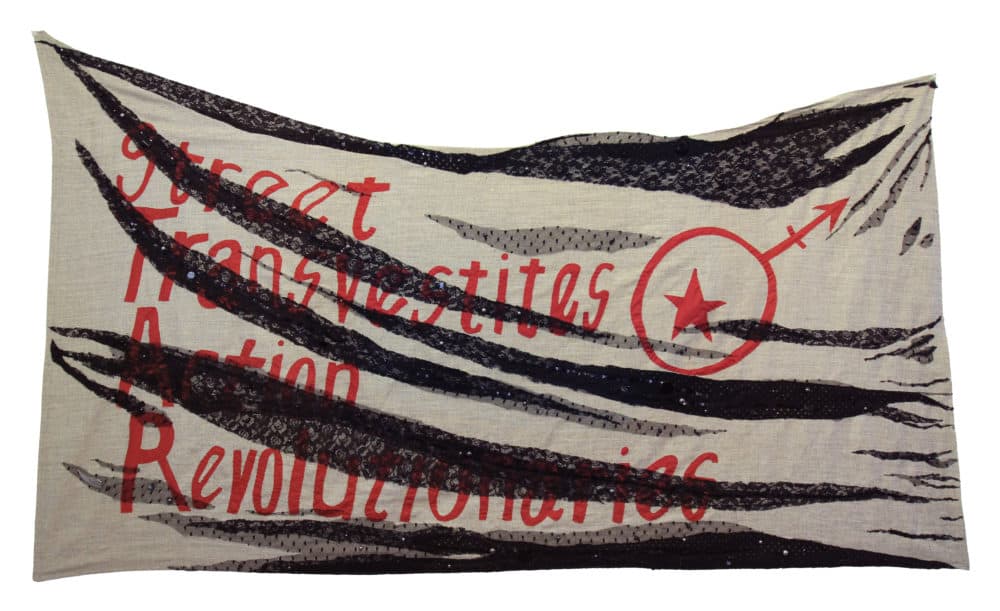 Artist Tuesday Smillie’s banner inspired by a photograph of the Christopher Street Liberation Day March in 1973. (Courtesy of the artist)

“There’s a presence to them,” Smillie says. “There’s this aliveness that is really beautiful and really resonant, and … carries from this photograph that’s now 40 years old.”

The photograph was taken years before the term “transgender” entered common parlance, but the activists in STAR — which was founded by Marsha P. Johnson and Sylvia Rivera — are considered forebears of the modern trans justice movement. 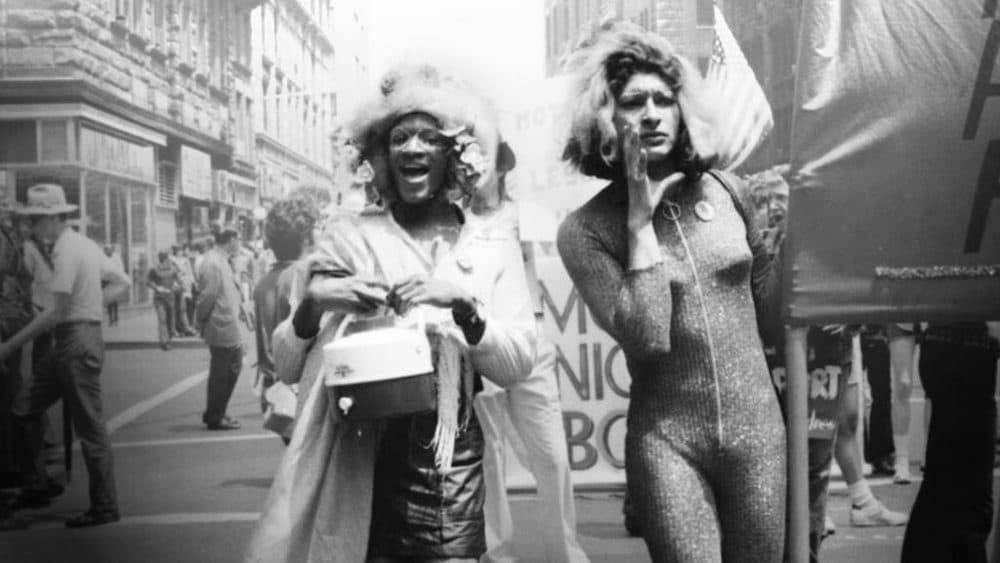 STAR worked primarily with homeless LGBTQ youth, and its members were largely excluded from the ascendant gay rights movement. More recently, these activists from the ’70s have garnered renewed interest as today’s trans and gender nonconforming people — like Smillie — search for a lineage.

“Growing up in the ’90s, any kind of media representation of trans people [was lacking],” Smillie says. “We’ve got ‘Silence of the Lambs,’ and then, you know, backpages in tabloids where folks are offering sex work. And that’s really kind of the only representation that was available. And so to be able to find these photos in an archive was really valuable for me.”

Smillie adds that she does not mean to denigrate or belittle sex work, but that as a young person, being exposed to “media depictions of trans people that were either monstrous or hyper-sexualized was profoundly alienating.”

A banner by artist Tuesday Smillie (Courtesy of the artist)

Smillie’s banner is meant as an homage, but there’s a bittersweetness to it, too; the lace details, which mimic the shadows in the photo, make it look frozen in time, a relic.

“This banner is long gone,” the artist says. “As far as I know, all of the members of STAR are dead at this point … this history has for the most part been washed over by mainstream historical narratives.”

Smillie’s work tugs at these hidden strands of history, pulling them into the present. Her exhibition is called “Tuesday Smillie: To build another world,” and it probes the events of the past in a quest to imagine a more just future.

In addition to the banners, the show features watercolor and collage, and a whole series of paintings based on Ursula K. Le Guin’s “The Left Hand of Darkness,” the seminal science fiction novel that takes place on a planet inhabited by an androgynous humanoid species. 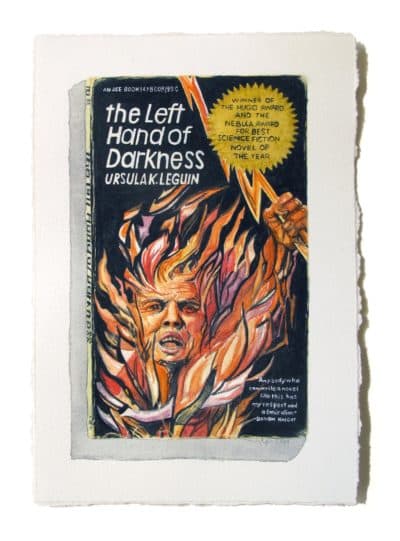 This is Smillie’s solo museum show — a milestone for the 36-year-old artist. But as she gains more attention, Smillie worries that her personal story could overshadow her work. To be an artist who is trans is to risk being reduced to that single fact. Smillie wants her art to be judged on its own merits, experienced on its own terms.

“I often try and use a kind of open-ended language that can be accessible to folks  with a lot of different lived experiences,” she says. “I want these works to be generous, and that’s part of their generosity. I don’t want to limit who they can resonate with.”

On the opening night of Smillie’s show, the Rose Museum echoes with conversation. Coe Lapossy and Vick Quezada, two artists from western Massachusetts, admire a drapey gray banner sliced with a swath of orange.

“[It] initially seem[s] simple, but everything is so nuanced, detailed and loved and cared for,” Lapossy says.

But the significance of Smillie’s identity and the exhibition’s focus on transgender politics is not lost on them, either.

“It’s pretty incredible to come to an institution where there’s actually an entire floor set up for work that’s marginalized work,” Quezada says. “I don’t often encounter work like this in large institutions — outside, I feel like, of maybe New York. But stumbling upon this is just sort of really — I don’t know, it’s wonderful, actually.”

The presence of Smillie’s exhibition at the Rose is indeed striking. Downstairs hang paintings from the museum’s impressive collection, work by revered artists from the past. They’re mostly white, cisgender men. But the first thing you see when you walk into the museum is the work of someone claiming a different heritage — one long absent from gallery walls.

“Tuesday Smillie: To build another world” is on view through Dec. 2.