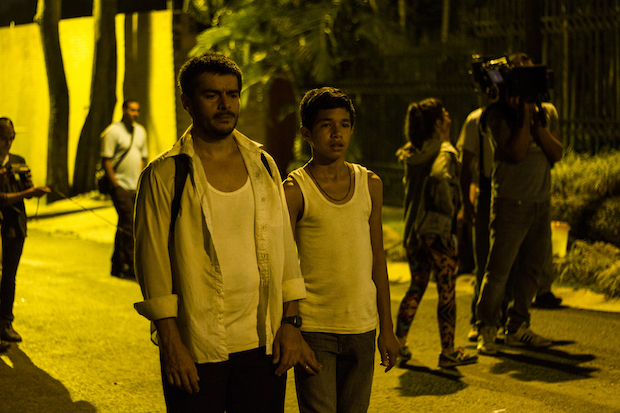 A scene from the filming of “La Familia.”

Associate professor of Latin American literature and culture Jerónimo Arellano has been an admirer of the Boston Latino International Film Festival for years. Every September, he and his colleagues in Latin American and Latino studies attend the festival’s screenings, often at other college campuses, and marvel at the quality and relevance of the films.

“I kept thinking it would be great to have Brandeis be a part of this,” Arellano says.

He has finally brought that notion to fruition. When he became chair of the Latin American and Latino Studies Program last year, he saw his chance to establish a partnership between the festival and the university. Brandeis will be an official host of the 2018 festival September 28 and 29, presenting screenings and talks with filmmakers in the Wasserman Cinematheque, Sachar International Center.

The culture of filmmaking in Latin America is based around many hubs of activity within cities throughout South America, Central America and the Caribbean. There are large national film industries in Mexico, Brazil, Cuba and Argentina, along with small yet active centers in places like Chile and the Dominican Republic, which results in a diversity of styles and perspectives.

There is also a long tradition of formally innovative, politically militant film, Arellano says, that in a way sets the stage for young filmmakers, and encourages them to discover their own ways of telling a cinematic story rather than borrowing from other traditions and industries.

“I think some people might not be aware of the quality of filmmaking coming out of Latin America. It is a vibrant filmmaking culture,” he says. “Experiencing these fresh new films will be a real treat.”

Now in its 16th year, the festival features a variety of feature-length and short films, documentaries and fiction alike, along with discussions with directors and producers. Choosing the films involves actively seeking out important new work from emerging filmmakers as well as a highly selective review of more than 100 submissions.

The festival is a labor of love. Everyone involved is either working on a limited part-time basis, or is a volunteer. Sabrina Avilés, a Boston-based documentary producer, has directed the festival since 2016, and has her sights set on making national noise. Avilés and programmer Isabel Dávalos scour the Latin American filmmaking landscape looking for the next big thing. Dávalos is a producer based in Ecuador and is well-connected in the South American film scene, while Avilés is tapped into what Latino filmmakers are doing in the United States

Some notable screenings in recent years have included the 2017 Venezuelan film “La Familia,” which was shown at the Cannes Film Festival, and “I Dream in Another Language,” which won an audience award at the Sundance Film Festival in 2017.

“Over the years, I think the festival hasn’t gotten the attention that it should,” Avilés says. “Our goal is for it to have international recognition. That’s what I’m trying to build.”

Avilés wasn’t initially sold on the idea of bringing the festival to Brandeis, as colleges don’t always offer the best physical spaces for screening films.

“It’s important [to filmmakers] to showcase the films in real theaters. It’s their baby and they want to showcase it in the best conditions possible,” Avilés says.

She warmed to Brandeis as a venue after taking a tour of the Wasserman Cinematheque, with its 100-plus seats and cinema-quality projection system. She also started to consider the number of people that a venue just outside Boston could attract.

“Not everyone who is interested in the festival necessarily wants to, or is able to, come into the city for a screening,” she says. “There is an opportunity to grow our audience here.”

Associate professor of history Alice Kelikian, who oversees the Wasserman Cinematheque as chair of the Film, Television and Interactive Media Program, says the festival is a welcome addition to Brandeis’ screening schedule, which regularly brings in filmmakers from around the world.

“We are very happy to make the cinematheque available for a global initiative like the Boston Latino International Film Festival, especially considering that the events will be free of charge for all,” Kelikian says.

Hosting the festival will be part of a larger effort by the Latin American and Latino Studies Program to host events with broad appeal, Arellano says.

“Film can be a vehicle to foster diversity on campus through the arts. We want to go beyond academic showcases to attract the attention of the wider community, to galvanize the interest students have in Latin American culture,” he says. “It’s a collaboration that we hope will be in place for many years to come.”

The Boston Latino International Film Festival will take place Sept. 27-30. The following events will take place on the Brandeis campus; all are free and open to the public:

“Ser Grande” (When I Grow Up)
Documentary, 86 mins, Karen Rossi, Puerto Rico, 2018
The daily life of Juan, Rushian and Ivianyd, three Puerto Rican teenagers, is challenged when they decide to participate in a series of workshops to discover their vocational aspirations and overcome personal limitations. The support of new mentors provokes awareness but moving forward is not so simple. Social, emotional and sexual identity obstacles are part of this choral portrait on the margins of Caribbean society.

“Extraterrestres”
Narrative, 97 mins, Carla Cavina, Puerto Rico, 2018
Screening followed by a Q&A with LGBT activist Wilfred Labiosa
Astrophysicist Teresa is going to get married, so she goes back to her family in Puerto Rico who run a successful chicken farm. Only, the fact she is marrying another woman is not the easiest thing to tell, and her secret starts unraveling all the other family secrets. It will take some galactic perspective to bring them all together again in this gorgeously filmed drama.

“The Rest I Make Up”
Documentary, 79 mins, Michelle Memran, USA/CUBA, 2018
Screening followed by Q&A with director
Maria Irene Fornes is “America’s Great Unknown Playwright.” When she stops writing due to dementia, a friendship with a young writer reignites her visionary creative spirit, triggering a film collaboration that picks up where the pen left off.

“Cor de Pele” (The Color of Skin)
Documentary, 15 mins, Livia Perini, Brazil, 2018 – (precedes “The Rest I Make Up”)
Screening followed by Q&A with director
“Cor de Pele” is a sensitive documentary about the life of Kauan, an 11-year-old albino boy. Born to black parents, Kauan describes in a playful, spontaneous way his day-to-day routine with his atypical family, as he has five siblings: two albino ones and three black ones. Even with his condition’s limitations, he breaks barriers and inserts himself in the abundant black local culture of his home town.

La Familia
Narrative, 82 mins, Gustavo Rondón Córdova, Venezuela, 2017
Followed by Q&A on Venezuela with filmmaker Rosana Matecki
Twelve-year-old Pedro roams the streets with his friends, raised by the violent urban atmosphere around him in a working-class district of Caracas. After Pedro seriously injures another boy in a rough game of play, single father Andrés decides they must flee to hide. Andrés will realize he is a father incapable of controlling his own teenage son, but their situation will bring them closer than they have ever been.

“O Som dos Sinos” (The Sound of Bells)
By Marcia Mansur & Marina Thomé
Screening followed by Q&A with film distributor
In Minas Gerais, Brazil, bell sounds set the pace of life of the residents of the historic cities, announcing the time for working, resting, prayer, and celebrations. The bell ringers, characters from the top of the towers, also learn how to inform deaths, births, fires, masses and time. The documentary is a poetic and visual representation of religious experience in everyday life and seeks to
communicate the symbolic universe of individuals’ intimate faith and native cities, where the sound
of bells is still reverberating.

“Meninas Farmicida” (Antkiller Girls)
Narrative, 12 mins, João Paulo Miranda Maria, Brazil, 2017
In a small Brazilian town, a teenage girl works every day in a eucalyptus forest where she chases ants away with pesticides. Yet, her inner struggle turns out to be the real fight.

“Cocote”
Narrative, 106 mins, Nelson Carlo de Los Santos Arias, Dominican Republic, 2017
A rapturous crime fable set in the Dominican Republic, Nelson Carlo De Los Santos Arias’ Cocote follows Alberto, a kind-hearted gardener returning home to attend his father’s funeral. When he discovers that a powerful local figure is responsible for his father’s death, Alberto realizes that he’s been summoned by his family to avenge the murder. It’s an unthinkable act — especially for him, an Evangelical Christian. But as pressure mounts, he sees few ways out. Questions of faith, tradition and honor course through this electrifying film, which, seemingly at the speed of thought itself, jumps between film formats, colors, and aspect ratios, radically envisioning a community torn asunder by senseless violence.

“Desayuno con Tiffany” (Breakfast with Tiffany)
Narrative, 14 mins, Andrés Molano Moncada, Colombia, 2018 – (precedes “Los Viejos”)
How hard is making breakfast? Rafael and a woman sleep pleasurably until a cell alarm interrupts them. He tries to get out of bed but she traps him with her arms while still asleep. He must sneak away without waking her up to make breakfast. It’s not easy; everything seems to be against him, even his love for her.

More information films and screenings at other venues can be found on the festival’s website.