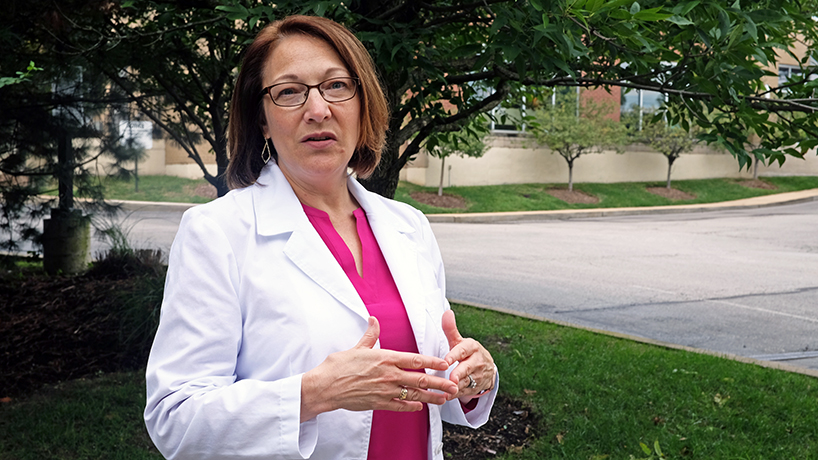 Not even the newly born get a reprieve from the opioid crisis.

On a typical day in August, staff at SSM Health St. Mary’s Hospital observed five infants – out of 22 – for withdrawal symptoms, otherwise known as neonatal abstinence syndrome. The hospital also counted 100 opioid-addicted babies it treated between November 2017 and February 2018.

Becky Boedeker, a lactation specialist at the hospital and a recent DNP graduate from the University of Missouri–St. Louis’ College of Nursing, recounted those numbers and said St. Louis reflects national trends. From 1998 to 2011, opioid use disorder in pregnant women increased by 127 percent in the United States.

For her DNP thesis, Boedeker created a new consult to educate mothers about non-pharmacological interventions for opioid-addicted newborns.

Babies born to mothers suffering from OUD spend their first days to weeks withdrawing in the maternity wing, if lucky, or the neonatal intensive care unit, if not. In the short term, withdrawal leaves newborns with jitteriness, tight muscle tone and gastrointestinal difficulties resulting in excoriated bottoms and feeding difficulties. NAS babies burn more calories and struggle to gain weight.

Long term, Boedeker explained that they “they kind of get lost to follow up” and are prone to ADD, addiction, risky behavior and school problems. All can be mitigated with a stable home environment.

“If we can intervene,” Boedeker said. “Pregnancy is when a time when a lot of women who are addicted will seek help, and it’s a time to help them make a change and help break that cycle a little bit.” 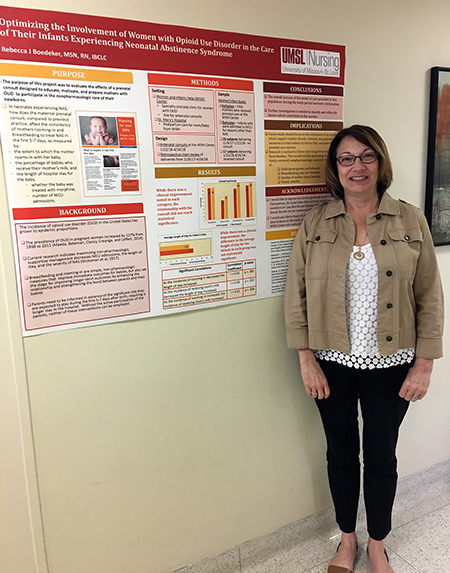 A prenatal consult could, she thought, get pregnant OUD patients thinking about how to improve their babies’ outcomes, which might make the difference for their infants. The consult was designed to empower these women to continue sobriety and play important roles in their babies’ lives. And a couple of changes made the atmosphere at St. Mary’s ripe for Boedeker’s initiative.

First, in October 2016, the Women and Infant Substance Help Center relocated to a large space on the St. Mary’s campus. Unique in the greater St. Louis area, the WISH Center provides comprehensive care for pregnant women dependent on opioids. Patients deliver at St. Mary’s so, all of a sudden, the hospital was caring for a majority of St. Louis’ NAS babies.

Second, St. Mary’s adopted a new assessment method for NAS babies called Eat, Sleep, Console, which emphasizes non-pharmacological care. Treatment for NAS customarily has been morphine, from which the newborns are gradually weaned, and the traditional assessment method skewed toward administering drugs.

“As long as a baby can eat effectively, sleep for an hour after feedings and be consoled in 10 minutes, then they are fine,” Boedeker said. “The mom is the treatment.

“Treatment is holding the baby, it’s rocking them, it’s keeping the lights down and not a lot of visitors, and it’s just really holding a baby. That’s all it is. Then breastfeeding. If a mom is stable and she’s getting treatment and clean for at least a month before the delivery, then she’s a candidate for breastfeeding.”

Predelivery treatment means opioid replacements, like buprenorphine or methadone, which help create a more-stable environment, though the babies will still have to withdraw after birth. Even with replacement therapy, breastmilk does not contain a clinical level of the drugs, and the mothers produce hormones like oxytocin, the so-called love hormone.

Despite the relative simplicity and effectiveness of non-pharmacological treatment, implementation has been historically challenging. Pregnant women do not exist in a vacuum and, with outside responsibilities, often check out during the withdrawal process. Boedeker hypothesized that, with advance knowledge, mothers would be able to rearrange their lives so that they could stay with their newborns.

With the blessing of her supervisor, Boedeker reached out to the WISH Center, then designed the consult. She performed 17 consults between January and April and compared her results to 23 OUD patients from November 2017 to January. She looked at rates of rooming-in, breastfeeding, morphine treatment and NICU admission. In all categories, Boedeker saw clinical, though not statistical, improvement.

The average stay at St. Mary’s for babies with NAS – 6.17 days – is already well below the national average of 17 to 30 days. Patients with the consult stayed about a day less, and none were admitted to the NICU or were administered morphine, though Boedeker credits the WISH center as well. She believes the consult would have more dramatic outcomes at other hospitals.

In fact, Boedeker’s results have convinced both the WISH Center and the Illinois Perinatal Quality Collaborative, a group of hospitals and providers that work to improve health care in Illinois that includes St. Mary’s as its high-risk perinatal center. The ILPQC and Boedeker are each working on implementing the consult more broadly.

“If we are able to get this in a standard way into prenatal care for the WISH Center patients, that will be available to all SSM,” Boedeker said.

Going forward, she hopes to be part of coordinating prenatal, intrapartum, postpartum and follow-up care and feels her role in lactation, in which she deals with both mothers and babies as a unit, gives her the unique perspective necessary to devise this care. She also heavily credits the DNP program’s emphasis on understanding the root causes of health disparities in vulnerable populations.

Boedeker feels both enlightened and empowered by the program and emboldened to share her knowledge.

“Part of it is an attitude,” Boedeker said, explaining how she works to rectify misconceptions about opioid-addicted mothers. “Opioid use disorder changes the way the brain works. You just have to be careful about the way you judge people. I’ve become more vocal to everybody I’m around. To make them stop and think.”