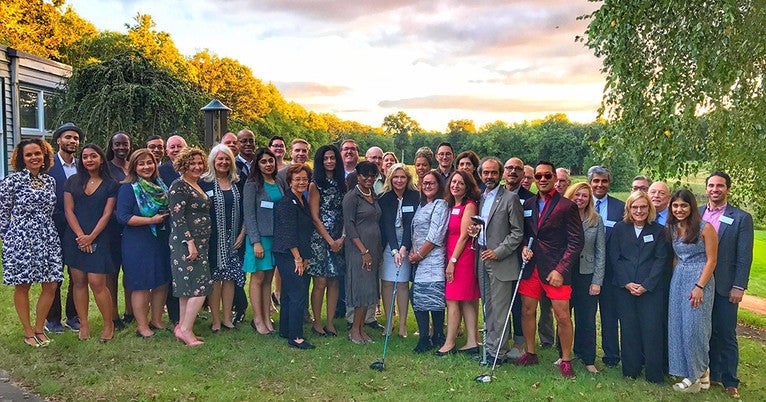 The Association of Yale Alumni (AYA) Board of Governors held its first full session of the academic year last week at The Omni New Haven Hotel at Yale. It was the inaugural meeting for the AYA’s new board and executive officers.

Newly minted chair Nancy Stratford ’77 oversaw the proceedings alongside new vice chair Jerry Henry ’80 M.Div. and AYA Executive Director Weili Cheng ’77. The meetings were held over three days, including full sessions Thursday and Saturday and a series of breakout conferences on Friday focusing on shared interest groups, volunteer leadership, mentoring, and outreach to alumni of the Graduate School of Arts and Sciences and Yale’s 12 professional schools.

“It was wonderful to gather our new alumni board to discuss important alumni issues and ongoing AYA initiatives, and to have an opportunity to plan events and programs for alumni that are meaningful for them,” Stratford said. “These meetings help us set the stage for the work we do during the year, and we truly appreciate everyone’s thoughtful input and collaboration.”

“Our new board is a truly remarkable group of dedicated volunteers, all of whom give of their time for love of Yale and their fellow alumni,” said Cheng. “Having the opportunity to meet with them in person and share ideas and learnings is an invaluable tool in the continued innovation of the AYA.”

The AYA Board of Governors serves as the chief advisory body for the AYA and consists of alumni of all ages, from Yale College, the Graduate School of Arts and Sciences, and the professional schools. In addition to its five officers, the Board of Governors is composed of 24 board members and seven ex-officio members who include past chair Rahul Prasad ’84 M.S., ’87 Ph.D., student officers, and alumni representatives from the Yale Board of Trustees, Yale Alumni Publications, Inc., the Yale Alumni Fund, and the University Council.