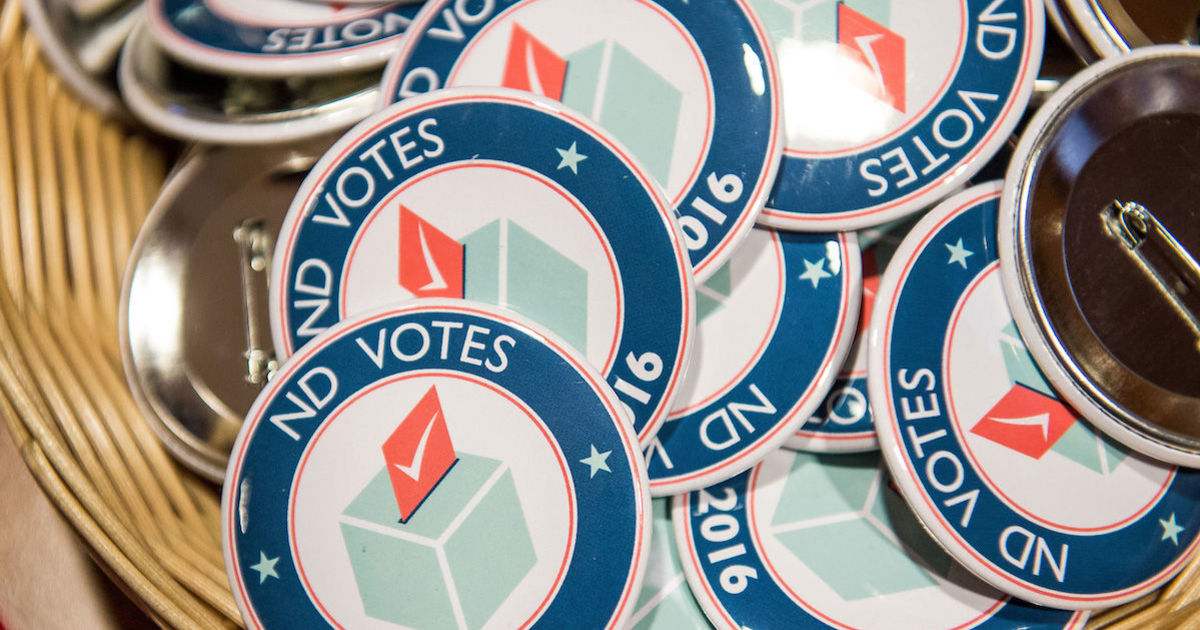 NDVotes is partnering with the League of Women Voters of the South Bend Area and Civic Duty South Bend to expand its mission beyond campus and promote civic engagement in the South Bend community ahead of upcoming midterm elections.

With support from the Indiana Campus Compact’s Campus Election Engagement Project, the like-minded organizations, which share a mission of nonpartisan civic engagement, will host a series of events between now and Election Day to educate, register and mobilize local voters.

In collaboration with Indiana University South Bend (IUSB), the group will host a voter registration event from 4 to 8 p.m. Tuesday (Sept. 25) at the IUSB Civil Rights Heritage Center, 1040 W. Washington St., South Bend. In addition to voter registration assistance, the event will feature civic, academic and student speakers from diverse backgrounds to share their thoughts on voting and citizenship.

On Oct. 2 (Tuesday), the group will host a screening and discussion of the film “One Vote,” a documentary that follows six voters during the 2016 election, with the film’s director, Christine Woodhouse, at the DeBartolo Performing Arts Center at Notre Dame.

And on Oct. 5 (Friday), the group will staff a voter registration booth at the South Bend Chocolate Cafe, 122 S. Michigan St., from 4 to 8 p.m. as part of First Fridays in Downtown South Bend.

Staff with NDVotes, the League of Women Voters and Civic Duty South Bend will be on hand at all three events to answer questions and assist with the registration process for students and residents alike.

NDVotes is a nonpartisan effort of the Center for Social Concerns, the Rooney Center for the Study of American Democracy and the constitutional studies minor to promote voter education, registration and mobilization among Notre Dame students.

“As a nonpartisan student task force dedicated to the mission of fostering conscientious engagement in political and civic life, we are very excited to take the next step in expanding NDVotes to include community outreach and partnerships with other nonpartisan organizations such as the League of Women Voters and Civic Duty South Bend,” said Kylie Ruscheinski, a Notre Dame senior and co-chair of the NDVotes task force.

“We at NDVotes believe that political engagement is a moral responsibility, regardless of political or religious affiliation,” Ruscheinski said, “and we look forward to taking the passion around this responsibility beyond campus to our greater community in South Bend.”

Steven Higgins, regional director of Civic Duty South Bend and vice president of Civic Duty, as well as a Notre Dame junior, said, “Millennials vote at lower rates than any other generation; therefore, Civic Duty believes strongly in registering and turning out high school and college students to vote in South Bend. Our collaboration with ND Votes and the League of Women Voters will allow us to extend our reach, engaging more students in the civic process.”

Elizabeth Bennion, professor of political science at IUSB and director of voter services and education for the League of Women Voters of the South Bend Area, said, “Partnering with Civic Duty and NDVotes provides the league with an opportunity to gain new insights about students’ thoughts on voting and citizenship. Meanwhile, it gives young people an opportunity to learn more about state and local politics, and to learn more about the league — an organization founded in the 1920s shortly before the 19th Amendment recognizing women’s right to vote.”