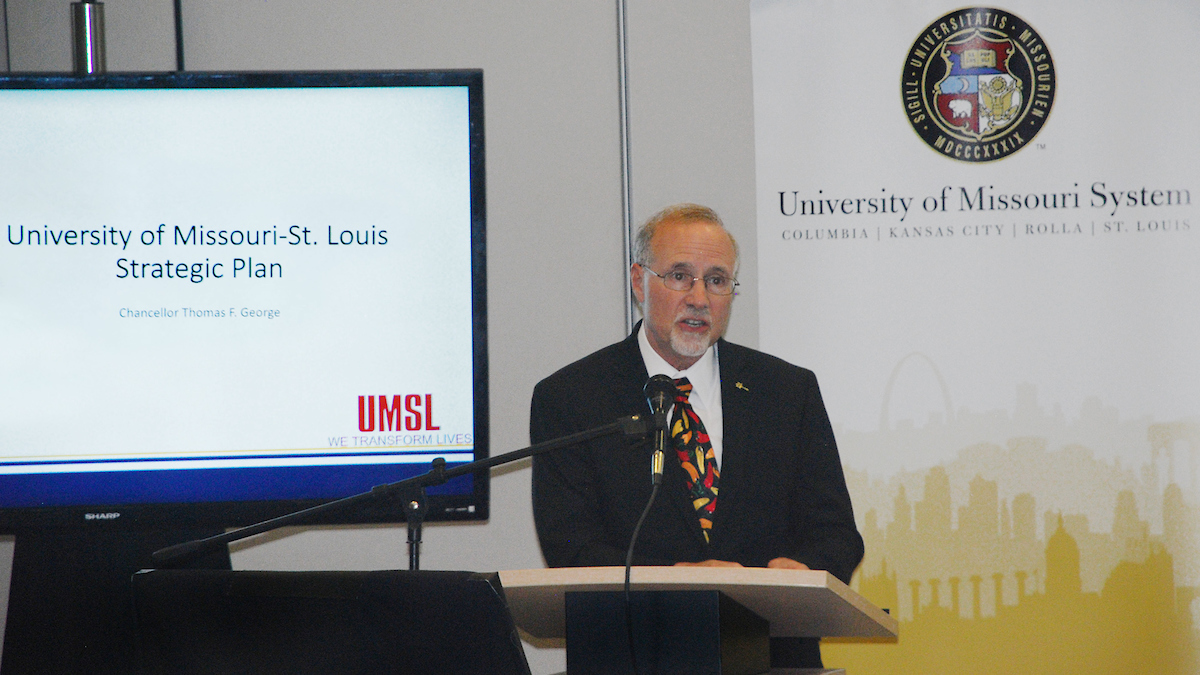 Chancellor Tom George presents UMSL’s strategic plan Thursday at a meeting of the Curators of the University of Missouri System in Kansas City, Missouri. (Photo courtesy of UM System)

With the board voting its approval, it is now time for UMSL to begin implementing that strategic plan and shaping its future through 2023 and beyond.

“The plan has been a real rallying point for us at the University of Missouri–St. Louis,” George said as he presented to the curators on Thursday. “Many different groups across the campus – the committees that have been formed, led by our Provost Kristin Sobolik – have come together at the same time that we’re also gearing up for our new accreditation with the Higher Learning Commission. The timing couldn’t be better.”

The plan is built upon a single mission to transform lives. George highlighted some of the goals for enrollment, student success and research for the next five years. They include:

UMSL will simultaneously continue its focus on community engagement and economic development through efforts like such as the Anchor Mission Initiative – a partnership between the Coalition of Urban and Metropolitan Universities and the Democracy Collaborative – as well as the recent formation of the Community Innovation and Action Center, building on the foundation of the Public Policy Research Center.

The process of setting those goals and plotting a course to achieve them has been in motion throughout the past year, and it has involved people from across the UMSL campus.

All four universities of the UM System must work within a framework outlined in the Missouri Compacts for Excellence, which focus on student success; research and creative works; engagement and outreach; planning, operations and stewardship; and inclusive excellence.

But each institution also has leeway to set their own goals and design the steps to meet them.