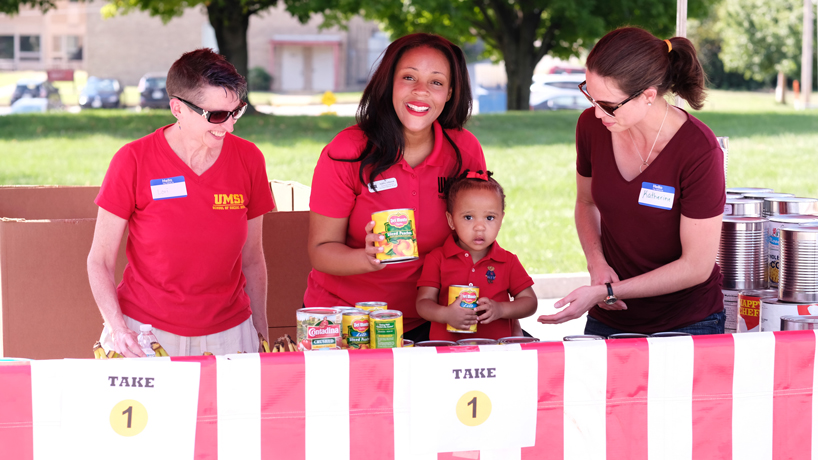 Ashley Johnson (center) and her 19-month-old daughter, Marleigh, help out at the first-ever Triton Mobile Pantry with volunteers (from left) Lori Curtis, associate teaching professor of social work, and Katherine Volandt, an international relations student, Sept. 14. Johnson, a 2017 UMSL graduate, is the case manager at UMSL Student Social Services and was the driving force behind the mobile pantry. (Photo by August Jennewein)

Ashley Johnson bounced from tent to tent on the South Campus parking lot between Marillac Hall and the UMSL Baseball Field on Friday, pushing along her 19-month-old daughter, Marleigh, in a stroller and making breezy conversation with volunteers at the first-ever Triton Mobile Pantry at the University of Missouri–St. Louis.

The 6,000 pounds of donated canned goods, boxed items and fresh fruit from the St. Louis Area Foodbank that was available to students, faculty and staff, as well as members of the surrounding community, was there thanks mostly to considerable effort and coordination on Johnson’s part.

Johnson had been on maternity leave for the past three weeks after the birth of her son, but she wasn’t going to miss the mobile pantry, an idea she helped shepherd from conception to execution. She worked until the day before her son was born to help pull it all together. You better believe she was going to be there for the end result.

“I was really sad that I was going to go out on maternity leave right when it was about to happen,” said Johnson, the case manager for UMSL Student Social Services. “So I told myself that I was going to pull myself together and get up here and watch this play out.”

Johnson served her practicum with Robin Kimberlin, UMSL’s associate director for Student Social Services, an office within the Division of Student Affairs. During her first practicum semester, in fall 2016, Johnson went to a mobile pantry on the campus of St. Louis Community College–Meramec, just to observe and report back to Kimberlin about the feasibility of bringing one to UMSL.

By the end of the day, Johnson was helping give out grapes. From then on, the project was hers.

“It was mind-blowing,” Johnson said. “It was totally amazing, just the impact it had on the community. I came back to campus, and I was like, ‘Robin, we have to get this implemented here.’”

Kimberlin wasn’t sure UMSL had the resources to pull it off, so Johnson wrote a program proposal of how it could be done. In February 2017, in the midst of taking 15 credit hours of classes and continuing to chip away at the 285 practicum hours needed for graduation, Johnson gave birth to Marleigh.

She earned her diploma in May. Kimberlin hired her as Student Social Services’ first full-time case manager three months later.

Friday’s mobile market was the first in what Johnson and Kimberlin hope will be a monthly series of such events on campus, weather permitting. While Student Social Services also offers a pantry for the UMSL community on the ground floor of the Millennium Student Center, the mobile market is designed to be for anybody with a need.

In turn, it gives UMSL volunteers a chance to help out their community.

“The St. Louis Area Foodbank looks for places like UMSL that can serve this way,” Kimberlin said. “Not everyone has the capacity to do a mobile market. We’re really well positioned. We’re by a Metro, we have the capacity to make it manageable. This was Ashley’s dream.”